Ashley Nicole Black Is Her Own Competition 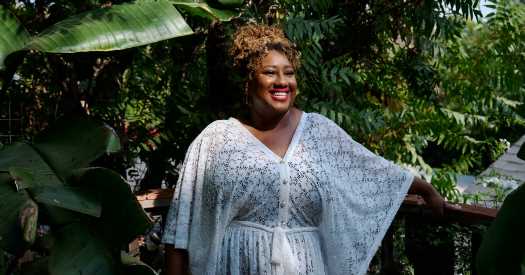 At first, Ashley Nicole Black didn’t get why people kept sending her the meme of Spider-Man pointing at an identical Spider-Man, an image often used to joke about situations in which two incredibly similar people face off.

But when someone Photoshopped Ms. Black’s face onto both Spider-Mans, it clicked. The 2021 Emmy Awards nominations had just been announced, and Ms. Black, 36, had been nominated twice in the same category.

She was competing against herself.

Ms. Black was nominated for Outstanding Writing for a Variety Series for “The Amber Ruffin Show” and “A Black Lady Sketch Show.” Two other people have been nominated twice in this category in the past five years: John Mulaney and Seth Meyers, both in 2019.

“I feel like that kid still, who’s on the side of the playground, who nobody’s noticed,” Ms. Black said in a recent video interview. But that’s just impostor syndrome talking. Ms. Black has been nominated for an Emmy eight times: twice for writing for a variety special and six times for writing for a variety series. She also won once, in 2017, for her work on “Not the White House Correspondents Dinner” with Samantha Bee.

Robin Thede, the creator of “A Black Lady Sketch Show” on HBO — which was also nominated this year as an Outstanding Variety Sketch Series, and twice for Outstanding Guest Actress in a Comedy Series (Yvette Nicole Brown and Issa Rae) — sees Ms. Black as “a force of nature and of comedy.”

“I have been lucky enough to work with her as a writer and performer and know firsthand how ridiculously good she is at both,” Ms. Thede wrote in an email. “She’s truly a powerhouse who will leave an indelible mark on this industry.”

Ms. Black described herself as “someone who’s observing what’s going on in the world, and trying to reflect it back to people.” “To me,” she said, “that’s art.”

She is from a family of musicians, so singing in an ensemble, she said — whether it was musical theater or show choir — meant learning to breathe with others and sound like one voice. This set her up for the moment she found improv comedy, because she already knew how to collaborate — and how not to steal a scene. “I was, I think, picking up all the pieces I needed to get where I was going,” she said.

After graduating from the University of California, Santa Cruz in 2007, she began a Ph.D. program in performance studies at Northwestern University. She hated it and was anxious all the time, she said, so her parents bought her an improv class at the Second City comedy club in nearby Chicago to blow off steam.

When she took a comedy writing class there, a teacher pulled her aside to let her know she was a writer.

“People had been telling me, ‘You should try this. You should try this,’ and I had been uncomfortably trying it,” Ms. Black said. “But ‘you’re a writer’? I was like, ‘yes.’ I completely shifted my view of myself to be a writer first. And that was when everything started to fall into place.”

Chicago, Ms. Black said, is the best place in the world to learn comedy writing. There’s an “emotionality” she found in Chicago that she values in many of her collaborators, including Ms. Bee and Ms. Ruffin.

This is the “good stuff” of comedy, in Ms. Black’s eyes: The stuff that happens when characters have feelings, and when they’re flawed. People who have been to therapy and have their lives together aren’t nearly as fun to embody, she said. A good example of a character who embodies that tension: Ashley’s perfectionistic alter ego on “A Black Lady Sketch Show.”

In the show, Ms. Black plays a woman (also named Ashley) who is a bossy know-it-all. She is trying for total control, and in the process, irritating her friends. “I am not like that and take great pains not to be,” Ms. Black said, “but it’s so much fun to play.”

“All day, you have anxiety. You’re trying to make sure everyone around you is comfortable,” she said of real life. “You’re thinking about what you say and what you do and how it affects people. And then, when you get to play those characters who aren’t that way, it’s so freeing.”

Ms. Black said she tends to be quiet and a little shy, and that she used to worry that not being “on” all the time might disappoint people. “But I’ve sort of released feeling bad about that,” she said, “because I just try to be present and have honest experiences.”

During the pandemic, those experiences included spending time with her family in Los Angeles, being a hardworking dog mom to Gordi the Sato and watching every Marvel movie ever made. “I just wanted to watch good guys win some things,” she said.

Right now she’s evaluating what she wants to do next and what percentage of her time she wants to spend on each thing. Ms. Ruffin wrote in an email about Ms. Black, “she’s gone from ‘a writer’ to ‘theeeee writer.’” But Ms. Black is still hoping for a 70-30 or 60-40 writing to acting split, she said.

For now, “It really made me so happy that people — oh my gosh, I’m getting emotional — care what I’m doing,” she said. “So I’m just really grateful that anybody noticed that I was working so hard.”