Beyond the ‘Meghan effect’: the true value of the Duchess’ influence

On the legal drama Suits, Meghan Markle, as she was then known, played paralegal-turned-lawyer Rachel Zane, who lived in the shadow of her famous litigator father. But despite her family's wealth, she opted to earn her own money and, if you will, carve her own path. Sound familiar?

As royal commentators and indeed the whole world come to terms with the news that Meghan, now Duchess of Sussex, and her husband Prince Harry will step down as senior royals and away from official duties, it's almost uncanny how the drama playing out echoes plot points from the former actress' TV show. 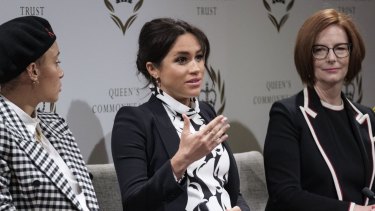 "[Meghan's] brand has been 'moulded' somewhat to fit the royal image with styling and protocol but that can only go so far," says Currie. "It's evident that her 'brand personality' doesn't fully conform and the ongoing media scrutiny has highlighted the difference between 'The Firm' and her as a person."

Right from Meghan and Harry's relationship "reveal" in November 2016, which was accompanied by an unprecedented statement from the Prince condemning the "wave of abuse and harassment" – including racist remarks – against Meghan, it was clear their union would rewrite the rulebook governing royal relationships, and life generally.

Starting with their wedding, which took place at Windsor (not Westminster Abbey like Prince William and Catherine, Duchess of Cambridge's 2011 nuptials) the couple, often with Meghan at least appearing to steer the action, moved to their own beat. Among the breaks with convention were the smaller guest list, the incorporation of African-American aspects in the ceremony (in line with Meghan's biracial heritage) and the bride leading the speeches.

These so-called "protocol breaches" continued through the couple's 2018 royal tour of Australia where Meghan hugged well-wishers, and the pair often put on public displays of affection to the delight of crowds from Bondi to Melbourne’s Royal Botanical Gardens. The upshot of all this, many said at the time, was that here was a couple who were making the royal family more modern, less stiff-upper-lip robotic, more … human. 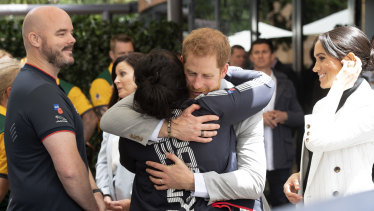 Hug it out … Despite criticism, Harry and Meghan have shown a softer, more affectionate side of royal life.Credit:AP

Fast-forward to International Women's Day last March and Meghan once again appeared to challenge royal rules discouraging political discourse by addressing gender inequality on a panel at King's College London. "If things are wrong, and there is a lack of justice and inequality, then someone needs to say something. And why not me?" said the Duchess, a long-time campaigner in the area of equality for women and girls.

So, in this sense, Meghan has certainly used her platform positively, and, some would argue, has been more vocal on causes close to her heart than other royals. Critics would argue it's preferable for the royals to do their work and do it with humility (read: quietly) but that has never been Meghan's modus operandi. It is highly likely these causes, together with the environment, are where she and Harry will direct their charitable efforts in the future.

In 2019, Meghan further differentiated herself from her popular sister-in-law by declining to appear on the cover of British Vogue (which Kate did in 2016) and instead guest-editing the edition, which featured 15 diverse "forces of change" selected by the Duchess, who prior to entering royal life ran a lifestyle blog called The Tig. Supporters said the move was the only way the beleagured duchess could avoid accusations of "look at me"; critics still called it a swipe at Kate.

Says Currie: "Like her or not, [Meghan] comes across as a strong-willed woman who has a voice and is not afraid to state her opinion. Publicly she has stayed true to her core of humanitarian and charity support … Most of the negative reputational influence comes from Britain, so that probably won't change but more exposure in US and Commonwealth may be positive."

And yet, for all her championing of noble causes, it's possible Meghan's influence has been most tangibly felt in the fashion world, something Christine Ross, co-founder of fashion fan site Meghan’s Mirror, thinks will continue despite her move away from royal duties.

"She is still the same effortlessly chic, inspirational modern woman that she has always been," says Ross, who is based in Washington DC. "We hope to see a resurgence of casual looks for Meghan … With her new role, she may be able to return to a more normal lifestyle doing the things she once loved."

Ross believes the change could spell good news for mainstream and sustainable brands as well as consumers if she gravitates towards styles that are more "down-to-earth and attainable" than some of the luxury labels royal formalities often dictated. (Last year, Meghan also partnered with retailer John Lewis on a collection of workwear basics to aid underprivileged women re-entering the workforce. At the time, the duchess signalled the project was the kind of initiative the Sussex Foundation would pursue.) 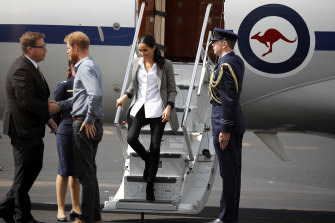 Influential … Meghan’s wearing of Outland Denim during the Australian tour had a profound impact on the company.Credit:Reuters Pool

Harriet Vocking from sustainability consultancy EcoAge recently told Elle magazine that Meghan's support of sustainable brands had "[realigned] people's vision of sustainable fashion. Previously, the term 'sustainable fashion' didn't come with the best reputation. Now, when you see Meghan wearing something like [French brand] Veja trainers, which are made with wild rubber from the Amazon [rainforest], you suddenly realise they're not only as equally cool as a pair of Gucci shoes, but have an amazing story."

James Bartle, co-founder of Australian ethical label Outland Denim, says Meghan made an irreversible impact on the business when she wore its jeans on the 2018 tour. "We know the brand wasn't just built on [Meghan] giving it exposure but she made our brand known to the world and opened doors we wouldn't have been able to open in such a short space of time," he says.

Bartle says despite the negative headlines surrounding Meghan's role in this royal rupture, her positive and "genuine" influence on ethical fashion deserves credit. "She's a very important person, one of the most important in the world, in that she will give exposure to a brand that is trying to create a better world. When you have someone who can wear your product and your whole mission is profoundly impacted in the way ours was, you know this person has a hell of a lot of power."

London-based global fashion search platform Lyst goes so far to suggest Meghan is more influential than Catherine, based on search traffic linked to their outfits. In 2019, the company named Meghan its "most powerful dresser", based on a 216 per cent surge in demand for similar pieces to the duchess' outfits (By comparison, Catherine is credited with a 119 per cent spike).

Lyst insights reporter Morgane Le Caer says that by "doing things her own way" Meghan has "shone a light on up-and-coming designers, put sustainable fashion on the map, and used her love for fashion as a way to highlight causes that are close to her heart".

"Interest is likely to spike over the next couple of months as the world closely follows the couple's next steps, both in the UK and in North America," Le Caer told The Age and The Sydney Morning Herald via email.

Bartle said that given the "surprise" nature of Meghan wearing Outland jeans – since protocol requires the royal family to buy their own clothes – the company was under-prepared for the resulting onslaught, which in Bartle's words sent sales "off the screen".

"Any brands she wears needs to be ready for that," he advises.

And while other celebrities, such as actors Leonardo DiCaprio and Isabelle Lucas, have boosted sales for Outland, Bartle says they "weren't anything like Meghan … If it was a strategy we put in place, it would be amazing. But it wasn't, it just happened."