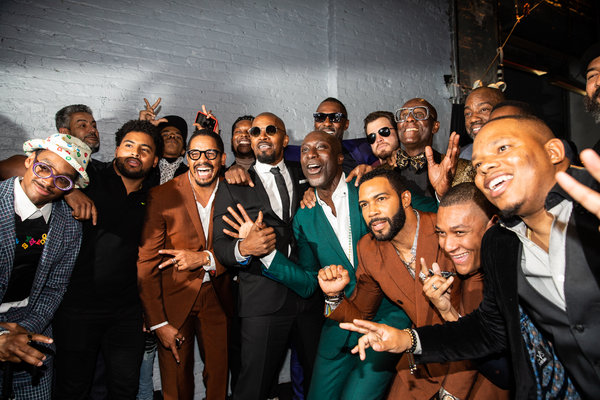 There was a time when Ozwald Boateng chose to play down his African heritage. “There was a political correctness,” he told a reporter only last year. “You wouldn’t talk about race.”

But during the interval between rehearsals and his fashion show at the storied Apollo Theater on Sunday, Mr. Boateng performed a striking and timely about-face.

“I’ve never been vocal about my African roots,” he said. “Now I can be. The world is an interesting place where cultural roots have become more important.”

He titled his show AI, which was not a reference to artificial intelligence. “Rather it means ‘authentic identity,’” he said. “There is a need to be in touch with ourselves with where we come from.”

That message resonated with his guests, a high-voltage crowd that included Dapper Dan, the celebrated Harlem designer with whom Mr. Boateng, 51, seems to feel an aesthetic and spiritual kinship; the Angolan model Maria Borges; Jamie Foxx; Chris Rock; Jesse Williams; and Idris Elba, who lounged in the front row alongside Sabrina Dhowre, his wife of one week, chatting affably with fans.

Mr. Elba, who wore the designer’s richly textured royal blue suit, was stoked, he said: “I’m a very old fan.” For recent public appearances he was dressed by Mr. Boateng, a British designer of Ghanaian descent known for his colorful spin on Savile Row tailoring. On those occasions, as on this, Mr. Elba said, “He gave me something really special to wear.”

Mr. Elba’s excitement proved contagious. “I know Ozwald spent a lot of time in Africa,” said Edward Enninful, the editor of British Vogue. “I hope to see something new come front that.” He was quick to point up Mr. Boateng’s steadily rising aesthetic clout.

“When he first worked on Savile Row, all the bright colors he’s known for, all that didn’t really exist,” Mr. Enninful said. “Now I see his influence everywhere.”

The show, intended to mark the 100th anniversary of the Harlem Renaissance, highlighted Mr. Boateng’s evolving style. Billed as immersive (the models strolled from the stage through to the aisles and back), it began on a provocative, politically freighted note, opening to the lyrics of “Who’ll Pay Reparations on My Soul?,” the 1970 Gil Scott-Heron protest song.

The curtain went up to reveal the kind of sharply tailored men’s designs on which Mr. Boateng has staked his reputation, alongside a debut collection of women’s suiting, the designer’s signature crispness softened by shawls and trailing panels of embroidered silk. There were plenty of African references: male models draped in fluid cloaks, hips wrapped in skirt-like lengths of fabric; women flaunting feathered headdresses.

But the overall effect was hybridized: a mix of Savile Row and 1970s Harlem, with a pinch of French élan. It may be recalled that Mr. Boateng served for three years in the early 2000s as men’s creative director for Givenchy.

Seen up close, his fabrics were rich if low-key variations on Kente cloth, the densely figured fabrics worn, as Mr. Boateng pointed out, by Ashanti chieftains and kings. They shimmered during the finale, models gliding down the aisles in a kind of processional that lent the evening an air of solemnity.

The event was Instagram worthy, but wasn’t that part of the point? Intent on making a splash, Mr. Boateng is hoping to cultivate something like the social media profile that helped put Virgil Abloh, another designer of Ghanaian descent, on the map.

But first he wants to get it right, he said, “to get it really connected to who I am as opposed to just pumping out images.”

How will he get there? “Actually, I’m still discovering that,” he said.