Ending 2020 With a Sweet Bit of Release

The hot chocolate bomb is a tasty metaphor for a pent-up year. 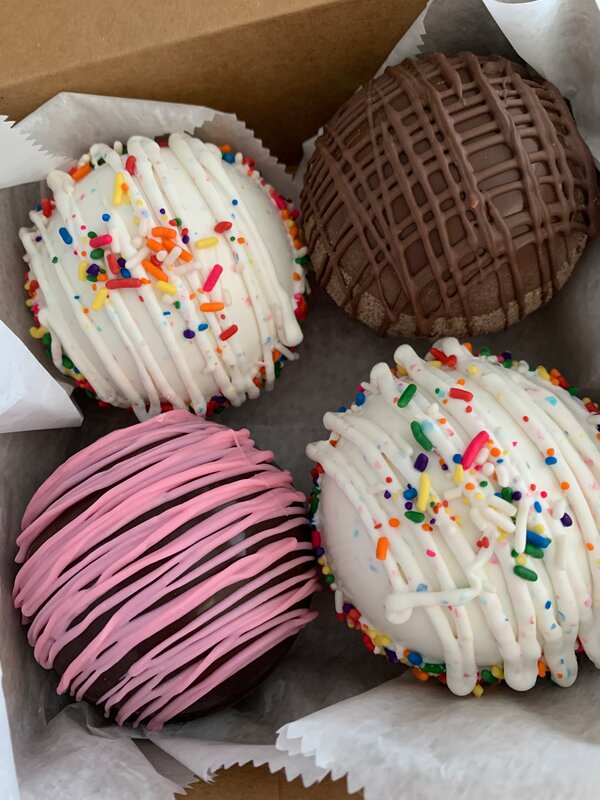 After months upon months of palliative food trends — baking sourdough bread, swirling up cups of Dalgona coffee, cutting into deceptive cakes — 2020 is ending not with a whimper but a bang, in the form of a hot chocolate bomb.

These hollow orbs, designed to dissolve dramatically in warm milk, began to take over TikTok back in October. Now they’re everywhere: Search for #hotchocolatebombs on Instagram, and you’ll find more than 100,000 photos and videos of the giant truffle-like treats, filled with marshmallows, candy and — for the grown-up consumer — alcohol. Even major grocery chains, like Trader Joe’s and Costco, sell them.

Local chocolatiers and bakers are getting in on the trend, too. Lori Waiser, 43, an owner of Lor’s Little Bakeshop in Morristown, N.J., began making hot chocolate bombs in late November after requests from some of her corporate clients. In the first three weeks, she sold 600 of them, which she made by hand in sets of three.

“I think these cocoa bombs are just adding instant joy to someone’s life,” Ms. Waiser said. The reward, though worthwhile, is also fleeting, she noted. “These are taking me close to 15 minutes apiece, and someone’s dissolving it in less than 20 seconds,” she said.

Andrea Traynor, 45, of Courtice, Ontario, who runs the lifestyle blog Mommy Gearest, purchased hot chocolate bombs for her children, aged 10 and 12, after seeing an Instagram Story.

“I watched somebody pour their steaming hot milk, and their chocolate bomb obviously exploded with complete perfection, and I thought, ‘Ooh, that’s fun.’” Ms. Traynor had participated in some of the year’s other social food trends, but the appeal of the bombs, she said, felt different.

In particular, she enjoyed being able to watch her children experience an ephemeral bit of delight. “We are so isolated,” she said. “So I really made a point, since spring, of trying to spark as much joy in my kids’ lives as possible.”

Stephanie Omens, 55, a psychotherapist in private practice in Manhattan, believes that the enthusiasm surrounding the trend is also about agency.

“It’s something that we can control in a place during the pandemic when we have been out of control,” she said. “We don’t know when it’s going to end.” The hot chocolate bomb offers a gratification that we can wrap our hands and minds around. “We know something’s going to happen instantaneously. And so, that’s exciting, and we get to master it.”

For Julie Dugdale, 41, a freelance writer in Denver, who was recently given a set of the hot chocolate bombs, the treats feel, indeed, like an antidote to the world’s current chaos.

Ms. Dugdale, who has two sons (an 18-month-old and a 3-year-old), said that her world is “very small” right now and that she is “constantly looking for new things” to deliver “surprise and delight.” Her youngest child has spent half of his life amid the pandemic.

“He doesn’t know any different,” she said. With that in mind, the simple melting of a chocolate bomb in a sea of hot milk, marshmallows afloat for mere seconds before their inevitable dissolution, can feel like this year’s necessary magic.

In the end, the hot chocolate bomb may be the ultimate memorial to 2020, the jettisoning of emotion in a year where it has previously been bottled up. Under pressure, everything was bound to crack open. Call it the perfect metaphor for the moment, held together by a fragile chocolate shell.

“You’re not sure when the explosion will happen,” Ms. Omens said of the hot chocolate deluge. “You wait in anticipation. And then, when it does, there’s joy.” Like fireworks, she said, the hot chocolate bomb offers a double helping of excitement: the crescendo to the main event and then, finally, the sweet, sweet release that we all have been craving.