Fashion at the Forefront of Biden Inauguration 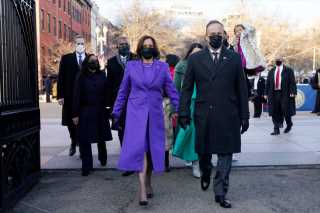 Striving for unity at such a critical time in U.S. history, the last thing the Joe Biden camp wanted the inauguration to be about was fashion. Yet fashion helped to project the administration’s powerful message.

Then there were the colors — the first lady in a calming ocean blue while Harris, Michelle Obama and Hillary Clinton went with variants of purple, a color meant to epitomize unity, as a blend of red and blue.

Beyond that, the star-studded inauguration at times appeared to be as much a fashion moment as a historical one. Designer brand after designer brand sent press releases proclaiming their involvement — Schiaparelli, Chanel, Miu Miu, Coach, David Yurman and Monique Péan. The list seemed to go on and on. Some sent shoppable links for the designs that were worn. Even New York Rep. Carolyn Maloney’s spokeswoman tried the unsolicited approach, touting her patriotic red, white and blue tweed Versace coat. The only hitch was the politician is known to champion New York City’s garment center, not Milan’s.

Ralph Lauren was well-represented for the second consecutive inaugural — Melania Trump wore a custom powder blue ensemble from the designer for her husband Donald Trump’s swearing-in four years ago. Save for Harris wearing a black turtleneck Oscar de la Renta dress at a pre-inaugural Lincoln Memorial event Tuesday night, several of the American designer choices were from emerging labels — even Harris’ camel coat on Tuesday night was by Kerby Jean-Raymond’s Pyer Moss label.

While the late de la Renta dressed various first ladies through the years, his creative successors Laura Kim and Fernando Garcia said they were honored to have played a small part in the inaugural celebrations. “The words of Vice President Harris and President Biden were truly inspiring, leaving us hopeful that better days are here for all of us and our friends around the world,” they said. 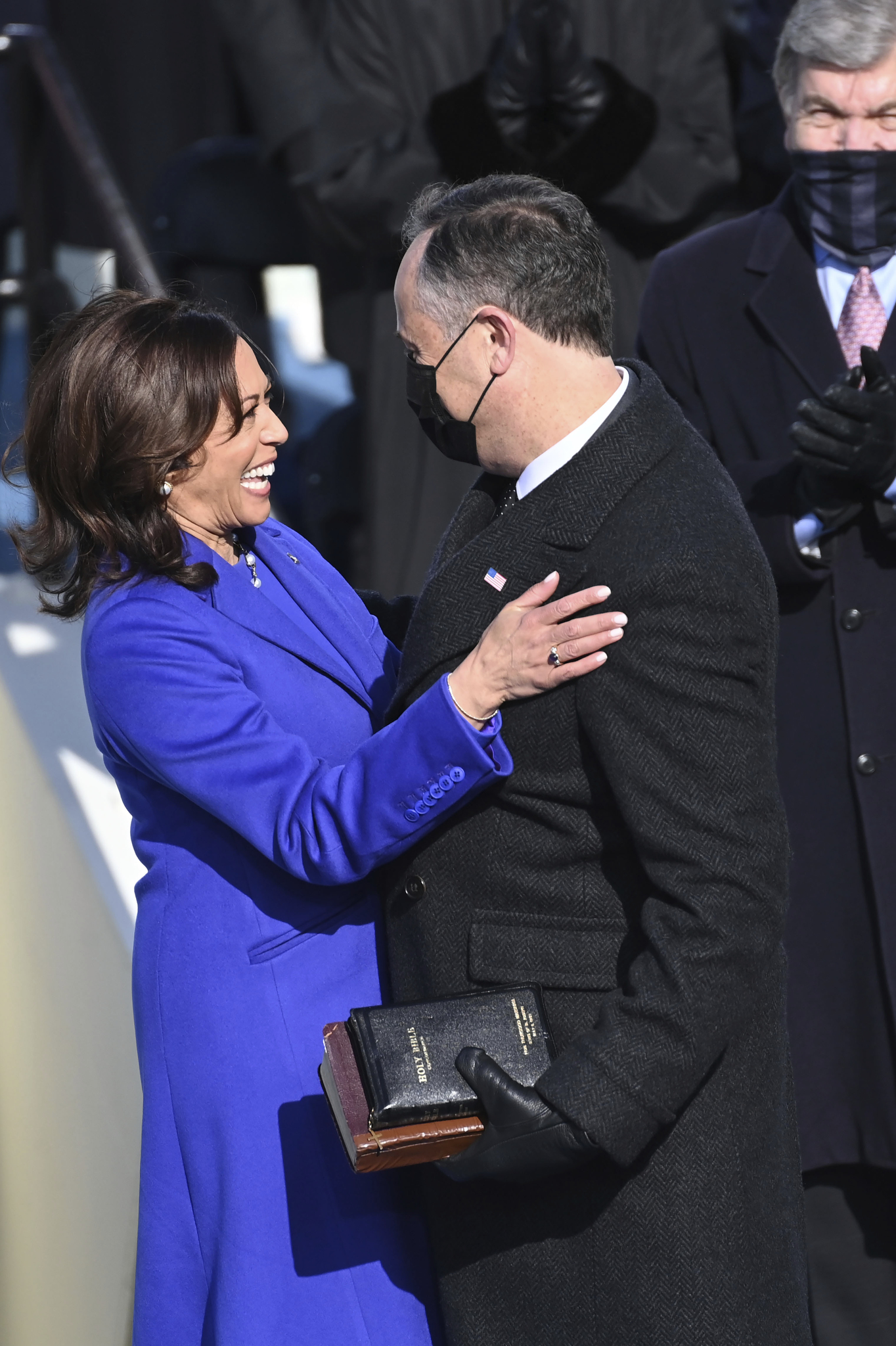 This was quite a switch from the now former FLOTUS Trump, who favored European designer labels more than American ones. To that point, she jetted out of Joint Base Andrew’s Wednesday morning wearing a black Chanel jacket, a Dolce & Gabbana dress and sky-high stilettos. But by the time Air Force One touched down in Palm Beach County, Fla., she had changed into a long-sleeved geometric-printed Gucci dress and flats.

While some American designers made a point of saying they would not dress Trump as first lady, the advent of the Biden administration seems to have had the reverse effect. Brands and designers fired out e-mails Wednesday highlighting their respective ties to key attendees.

Both Vermont Sen. Bernie Sanders and new Senate Majority Leader Chuck Schumer did their parts to champion their home states, with Sanders wearing a Burton Gore-Tex Edgecomb Down 3-in-1 Jacket — paired with sustainably made knitted mittens designed by Jen Ellis, a teacher from Essex Junction who gifted the pair to him — and Schumer sporting a new Hickey Freeman cashmere topcoat that his wife Iris Weinshall reportedly pushed him to have made for the historic occasion. 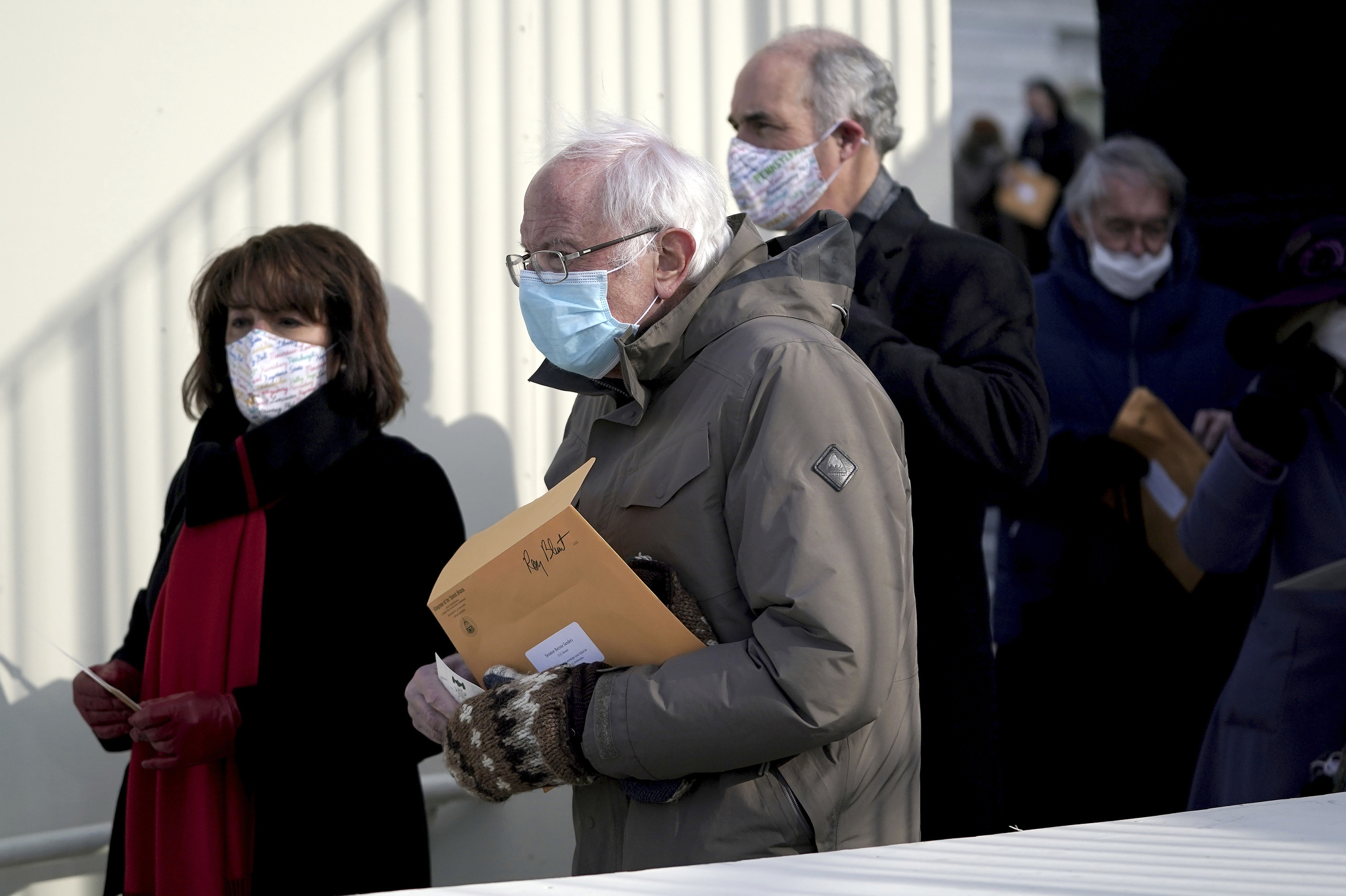 The first and second families’ extended kin also helped to up the fashion factor. President Biden’s granddaughters Naomi, Finnegan and Maisy wore chic coats in white, camel and black. Their cousin Natalie went with a pink one with a coordinating mask. Harris’ niece Meena, founder of the Phenomenal Woman label, wore a green shearling Coach coat with a skirt and blouse from Ulla Johnson. The previous day she cruised around the outskirts of the Washington Monument in an all-white ensemble with quilted Marion Parke boots. For Wednesday night’s festivities, she sported a look from Prabal Gurung, the New York designer who dressed the-then vice president-elect for the Democratic National Convention.

Arriving as if she were at the Metropolitan Museum of Art’s annual Costume Institute gala, Lady Gaga chose custom Schiaparelli haute couture. Daniel Roseberry designed a fitted navy cashmere jacket with a gilded dove of peace brooch, and a dramatic, long, voluminous skirt in washed red silk faille for her performance of “The Star-Spangled Banner.” “As an American living in Paris, this ensemble is a love letter to the country I miss so dearly and to a performer whose artistry I have so long admired,” Roseberry said.

Indicative of how many brands were eager to spread the word about their respective alliances with key inaugural attendees, Maison Alaïa noted how Lady Gaga wore a custom white double-breasted wool coat  with a white Alaïa mask for her arrival to the Capitol. (The latter retails for $160 on the company’s site.) 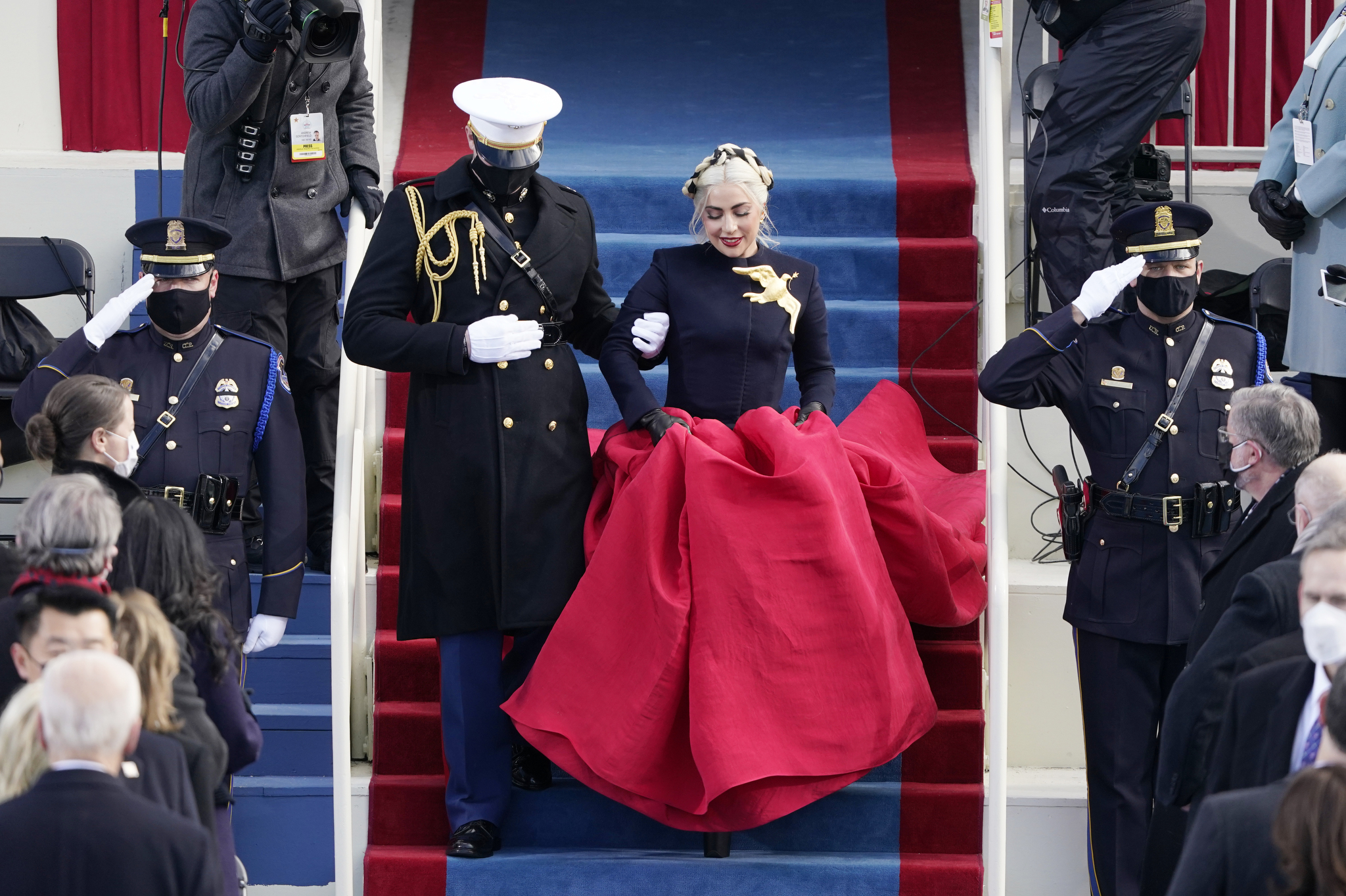 Jennifer Lopez also pulled out all the stops, choosing an ecru and white tweed Chanel coat and white sequin wide-leg pants with a white silk blouse, as well as Chanel earrings, bracelets and belt, for her performance of “This Land Is Your Land” and “America the Beautiful.” Ralph Lauren and Coach had also tried to suit up J.Lo, but to no avail. Another source, who was involved with her potential selections, said Lopez’s team was looking for “very low-key, no drama, nothing too strong and showy.”

Other non-American luxe labels also got in on the inaugural dressing. Jimmy Choo nude-colored patent pumps were sported by Jill Biden and Manolo Blahnik’s “BB” pumps were worn by Harris.

Amanda Gorman, the youngest inaugural poet to date at age 22, was a crowd favorite and not just for her soothing lyrical verses. Her bright yellow Prada coat was a winner, as well as the red satin headband and black pumps. Gorman is not a newcomer to the Italian luxury house: She participated in Prada’s “Shaping a Sustainable Future Society” in 2019.

Michelle Obama was striking in her purple Sergio Rossi coat, turtleneck and  pantsuit with a gold belt. Hillary Clinton was easy to spot in the socially distanced crowd in front of the Capitol in her Ralph Lauren purple pantsuit. Fellow former First Lady Laura Bush  was more refined in a softer blue coat with black velvet trim. Her husband George W. Bush sported a different kind of in-your-face patriotism by wearing a navy face mask imprinted with a small American flag.

Even Garth Brooks was on board with the inaugural’s fashion message, wearing royal blue pants with a dark shirt and jacket to perform “Amazing Grace” as a sing-along.

While a few designers like Markarian’s O’Neill were willing to chime in about their involvement in suiting up key political figures, others opted to let history speak for itself. A spokeswoman for Christopher John Rogers said, “We have chosen not to comment at this time so the focus stays on the importance of today’s inauguration.”

Respectful as that is, Inauguration Day wardrobe choices can sometimes rocket designers’ careers. Jason Wu gained immediate international fame after first dressing Michelle Obama for the inaugural balls in 2009 and then again in 2013. Others, like the late Isabel Toledo, also received worldwide attention for suiting up Obama at the 2009 inauguration, but she maintained a more publicity-shy, artisanal approach to fashion. Garnering worldwide attention is one thing, but harnessing that fame to scale up substantially requires the capability and the financial backing to do so. And over the decades very few of the designers, who outfitted first ladies have managed to do so.

With a six-person team in New York City, O’Neill said Jill Biden is looking to support new talent. The first lady understands “the impact that her choices have on fashion and the impact that then has on so many jobs, especially Stateside,” according to O’Neill, who started her company in 2017.

The story surrounding the dressing of new President Joe Biden, meanwhile, was described by one source as “a fire drill.”

The incoming commander-in-chief and 46th U.S. president chose one of America’s most iconic designers, Ralph Lauren, for his public inauguration outfit. This confirms a report in WWD last week that Biden would be wearing a Ralph Lauren suit.

The suit as well as the overcoat Biden wore for the swearing-in were produced in the Hickey Freeman factory in Rochester, N.Y., now called the Rochester Tailored Clothing factory.

Because of the rioting at the Capitol earlier this month — as well as the pandemic — plans for the inauguration were in flux even until a few days before. As a result, Biden’s outfit choice was also up in the air in case the ceremony had to be held elsewhere than in front of the U.S. Capitol.

Sources said Ralph Lauren designed two suits — single-breasted, notch lapel — one in black and another in a “high shade of blue,” as well as two topcoats, one black and one navy, both in cashmere. The suits were in an English wool that is a hallmark of the Ralph Lauren collection.

The designer’s team confirmed that the company had created the suit and topcoat after Biden appeared at a church service prior to the inauguration ceremony.

The choice of the legendary designer led one observer to comment: “This is a symbolic sartorial statement for a return to decorum and upholding the values of America.” Biden has been photographed publicly several times of late wearing Ralph Lauren. He wore a Polo shirt with a visible pony logo — a classic American sportswear piece — for both of his public vaccinations.

According to sources, Biden’s suit and coat were both custom Purple Label, the top-of-the-line offering designed by Ralph Lauren. Although Purple Label is usually manufactured at the Sant’Andrea factory in Milan, Italy, the Rochester Tailored Clothing facility is used whenever anything from those patterns needs to be created quickly. Having the suits made in Rochester also upheld Biden’s Made in America push — as well as tradition that most U.S. presidents wear American tailoring when they are sworn in (President Trump wore a Brioni suit, a favorite label, but a Brooks Brothers topcoat.) 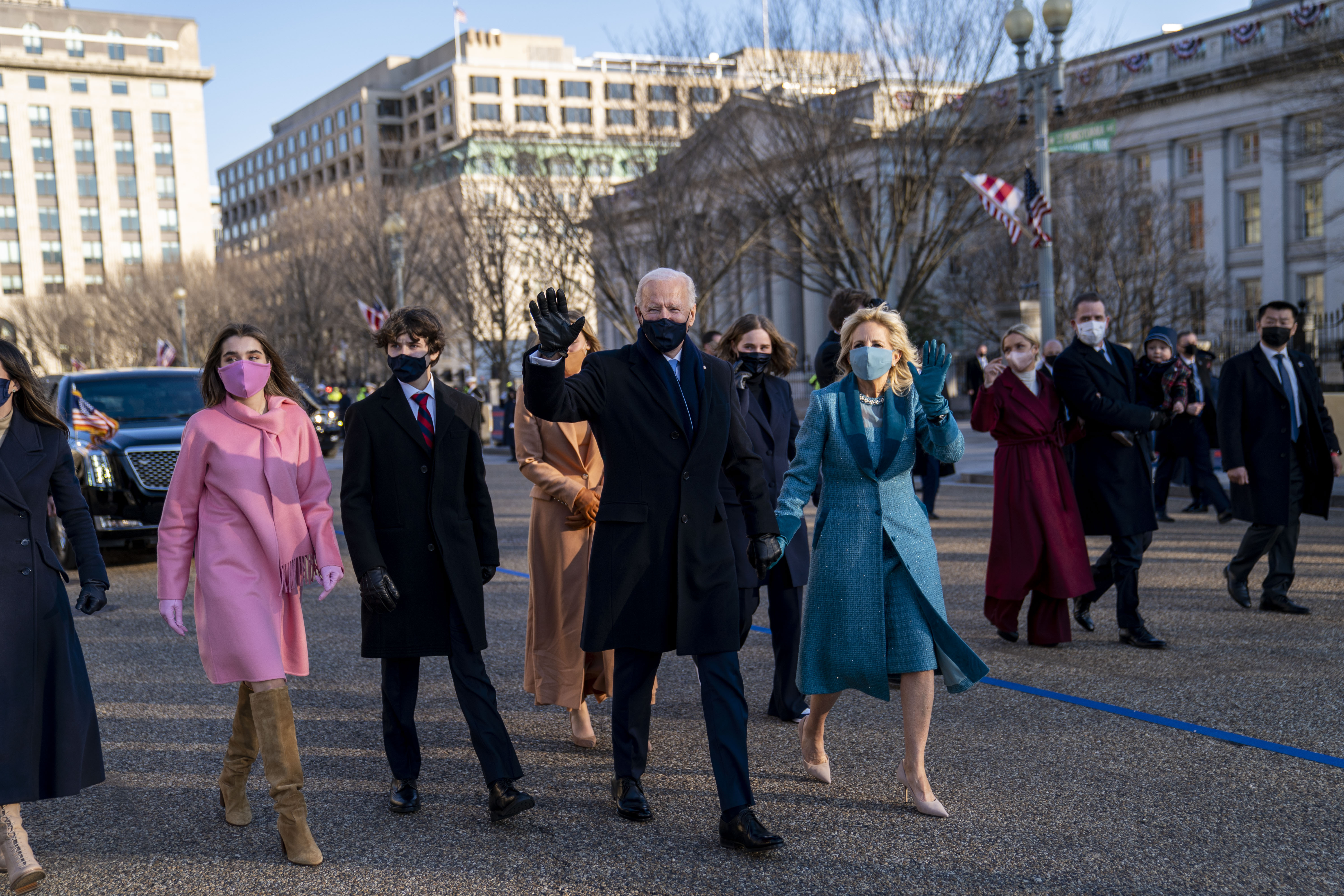 Rochester Tailored Clothing produces the Polo clothing for Ralph Lauren’s lower-priced collection, and the team was reportedly preparing to work off those patterns to produce Biden’s outfit. But when it was shifted to Purple Label at the last minute, the plant pivoted.

All other work at the facility stopped, the staff was brought in at 6 a.m. Monday and worked all day to produce the suits and coats. They finished at 7 p.m. and Ralph Lauren is understood to have sent a car to drive the clothing to Wilmington, Del., where Biden had a fitting on Tuesday.

And lest anyone believe the choices of outfits weren’t strategically considered down to the accessories, all they have to do is look at the gloves. Jill Biden relied on American brand Wing & Weft Gloves to polish off her look. The New York-based company also provided gloves for Michelle Obama in 2009 for President Obama’s first inaugural. Owner and chief executive officer Katie Sue Nicklos said she handpicked the Cabrera skins for the gloves in Europe.

Noting how stylists for Biden and Harris have been very strategic in utilizing young designers and makers in the garment district in New York City, she said, “How wonderful it is that they are shining a spotlight on talented people right here? This is what made-in-America looks like.”