First ‘the Group Thing,’ Then a Couple

A cabin weekend, in February 2018, with perhaps a bit of hockey, some snowmobiling and football, and definitely with a big fire in the middle of Lake 26, in Danbury, Wis., is the event that Nicole Nelson and Kyle Kriewall mark as the beginning of their story.

The two were alums of contending schools — she went to the College of St. Benedict and he received both a bachelor’s degree and an M.B.A. from the University of St. Thomas, both in Minnesota. But the rivalry was friendly, and her sister, who is one of her identical triplets, is now married to one of his college roommates. Amid the activities of the 10 or so weekend revelers, each took notice of the other.

“I definitely had a flutter,” said Ms. Nelson, recalling a breakfast out in which she and Mr. Kriewall ended up seated next to each other. “I didn’t even notice anyone else sitting around the table. It truly didn’t feel like anyone else was in the room.”

He also remembers being impressed. “I recognized how confident she was in herself,” he said. “I just was very interested in her and knew I wanted to pursue things further.”

Several more group activities followed, including a party at his condominium in Minneapolis, at which they shared a first kiss, and a dinner in St. Paul at which his sharp-eyed sister noticed something happening between them.

“We were sitting at opposite ends of the table, trying not to be obvious, but his sister picked up on it,” Ms. Nelson said. 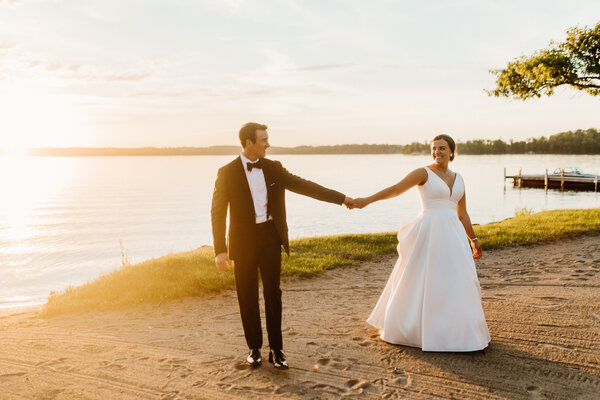 Both are avid sports fans, so for their first official date, they went to see the Minnesota Twins play an early-season baseball game against the Houston Astros.

“He kind of said, we’ve done the group thing, I would really like to get to know you,” said Ms. Nelson. “He wanted to make it clear that this wasn’t just two friends getting together.”

Ms. Nelson, who is 27 and a nurse for the Mayo Clinic, providing remote monitoring of Covid-positive patients, soon began spending her days off in the twin cities with Mr. Kriewall, 29, rather than in Rochester, Minn., which is her hometown and about an hour away. He is the golf marketing manager, overseeing strategy and communications to the golf market, in the Toro Company’s irrigation division, which is in Riverside, Calif. (where both recently moved, and from which Ms. Nelson now works remotely.)

The two were engaged in April 2019, and had originally planned to be married in May 2020 but postponed their plans a year because of the coronavirus pandemic.

On June 5, the couple were married at Madden’s on Gull Lake, a resort in Brainerd, Minn., with Gerald A. Houge, a retired Air Force chaplain, officiating.

Mr. Kriewall realized he’d met his match when Ms. Nelson attended a trade show with him and didn’t flinch at being tossed into a cocktail hour with strangers.

“Watching her work the room, being so confident, not knowing anyone in there at all, that’s when I knew,” he said. “She’s definitely the one for me.”