Amanda Peet doesn’t shy away from discussing some of the tougher aspects of motherhood.

The actor and her husband, David Benioff, have three children ― Frankie, Molly and Henry. Since becoming a mom in 2007, she’s shared her experience with work-life balance, postpartum depression and the challenging conversations she sometimes has with her kids.

In honor of her Jan. 11 birthday, here are 13 quotes about parenthood from Peet.

On Realistic Depictions Of Parenthood

“I’m a mom, and I remember when I first had Frankie and some of my friends were becoming moms at the same time, and some people said to me: ‘Doesn’t it just put everything in perspective?’ And I was like, No. [Laughs] I’m still really competitive and ambitious and really petty. So I appreciate the way the Duplasses talk about parenting and family and midlife. It’s an accurate perception, for me.”

On Putting On Her Own Oxygen Mask First

“It’s a good metaphor for parenting, but it’s really hard to do sometimes. A lot of women feel that if they’re exerting energy in different areas of their life … it’s automatically detrimental to the child. I think the exact opposite is true. Children need to have a role model who is able to identify her passions and go after them. Sometimes I feel guilty about making time for my friends, but that’s a good model for Frankie, and it’s poignant to me because she’s a girl. It’s important for her to know that when I leave her, it’s to go see someone who needs me. That I have to stay on the phone right at that moment because I’m checking with a friend who’s opening a play or something like that.”

“One surprise of motherhood for me was how little control I have. I thought it would be an extended, blissful romance with me at the helm, cuddling this little creature to life. It’s been bittersweet and humbling to let her lead, and to try not to be perfect myself.”

On Teaching Her Daughter About Failure

“I have moments where I’m incredibly spontaneous and incredibly certain about a route we should be taking. And other times, I’m completely paralyzed and I call my sister and mom and I talk to one of [Frankie’s] teachers and to my girlfriends … I think it’s important for her to know that you can fail and then recover and that — it’s so corny — but that failure is important. It’s part of the thing. You cannot escape it. There’s nothing you can do. There’s no way you can control everything that much.” 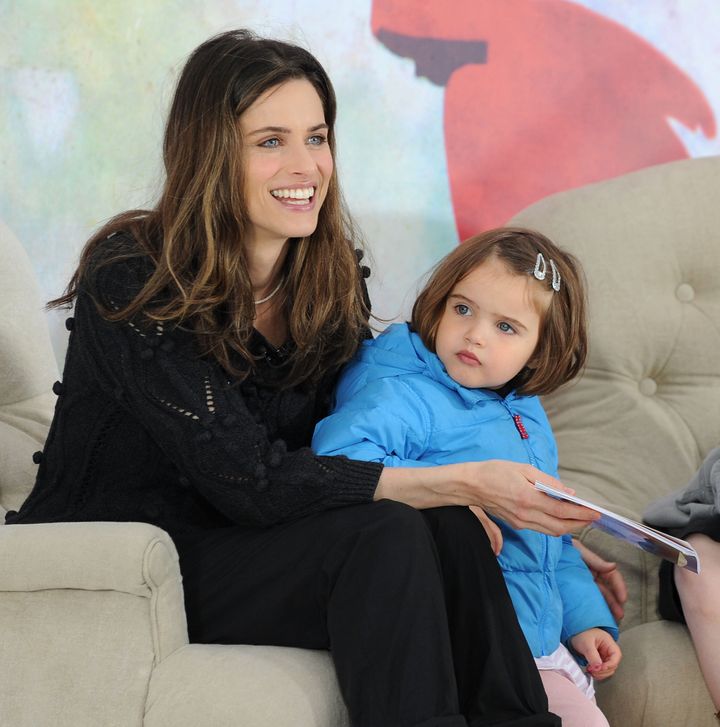 On Date Night For Parents

“We put Frankie down, then order in and watch ‘Mad Men’ or ‘Nurse Jackie.’”

“I certainly don’t want her to be obsessed with exercise or diet or calories or body image. I’m dying for her mental time to be spent looking outward, even if that sounds corny.”

“I want to be honest about it because I think there’s still so much shame when you have mixed feelings about being a mom instead of feeling this sort of ‘bliss.’ I think a lot of people still really struggle with that, but it’s hard to find other people who are willing to talk about it.”

“My kids are awesome. I don’t mean to toot my own horn, but they’re pretty adventurous. They always have been. We thought it might help if they pretty much ate whatever was for dinner when they were babies. Frankie was my first, and she’s actually the best eater. She’ll eat shrimp eyeballs and squid ― pretty much anything. We just always say what my mother would say: [in an imposing voice] ‘This is not a restaurant! Whatever’s for dinner is what’s for dinner!’”

On Wanting Her Kids To See Her Succeed

On The Anti-Vax Movement

“I think there’s a feeling, especially in Hollywood, that it’s cool to be really skeptical of pharmaceutical companies. I think that we’re so used to being skeptical that sometimes we take it too far. It leads to what can be really dangerous misinformation.”

On The Time Her Daughter Asked What Sex Is

On Dealing With Others Rejecting Her Kids

“My first kid ― it was her first day of EC2, which is before kindergarten ― and I thought there were starting to be mean girls already in her class. Really cute, really confident and loud. And Frankie and all the boys were chasing them, chasing boys against girls, and my daughter Frankie was like, ‘Catch me! Catch me!’ And they all just ran by her. I was like, ‘I’m gonna have to go to therapy about this.’ Because the rage? I was like, ‘No.’ … But it’s incredible how juvenile — my feelings are so adolescent. Like when I also found out that my younger daughter ― the boy she has a crush on had a crush on somebody else ― and it was just [a] bewildering juvenile response deep inside of me. Like, just ridiculous.”

On Relationships With Food

“I have daughters, so I try not to have that calorie-counting mentality. I try not to expose them to that because I think girls should just play sports and not think about food until as late as possible.”