I jetted to Turkey for a £3k tummy tuck, I weighed 25st & used to spent £7k a year on takeaways now I’m unrecognisable

A FAST food 'addict' who guzzled £7,000 of takeaways a year has shed more than ten stone after jetting to Turkey for a £3,000 tummy tuck.

Scarlet Black tipped the scales at 25 stone but 'life-changing' gastric sleeve surgery has seen her lose almost half of her body weight. 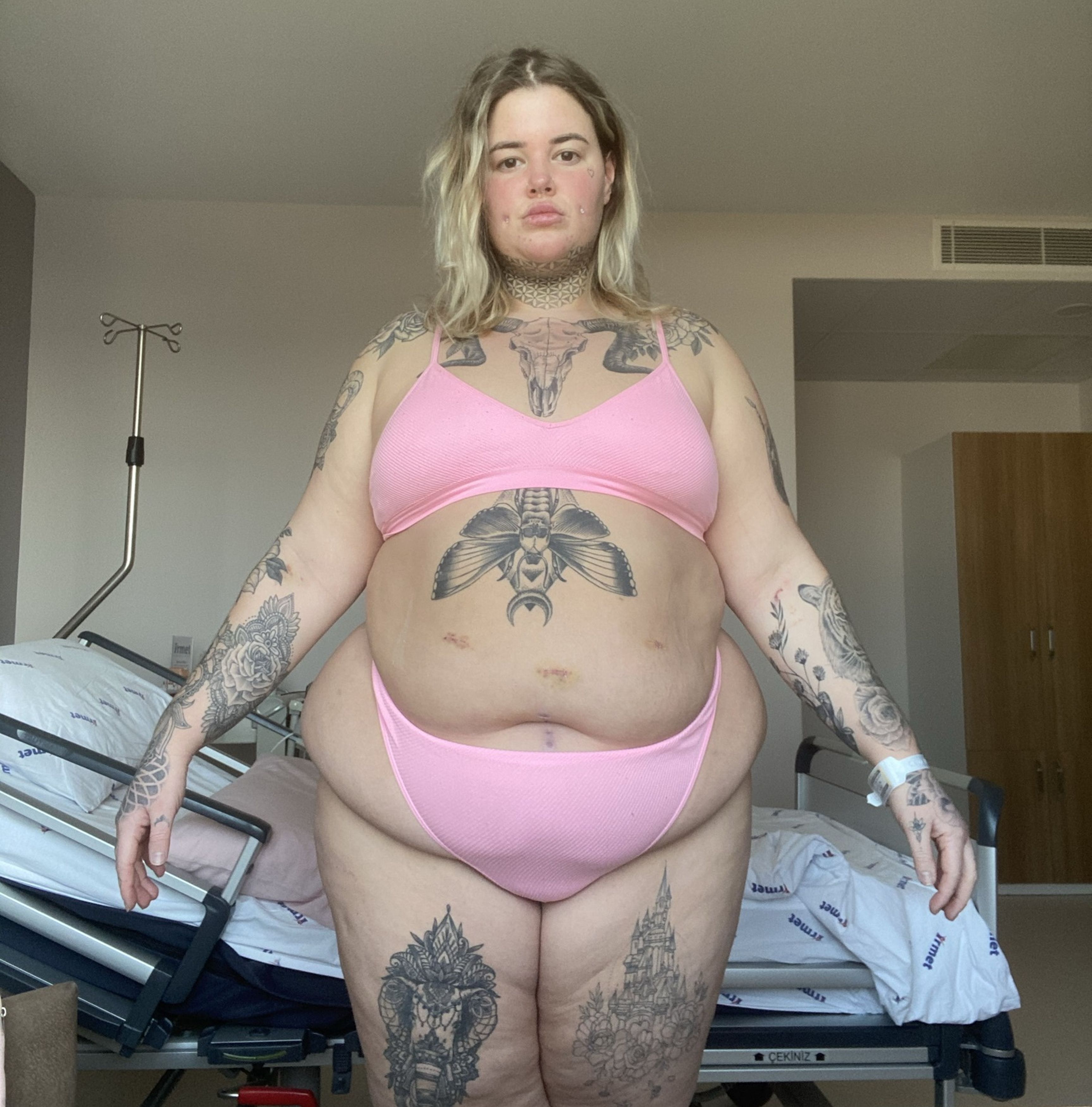 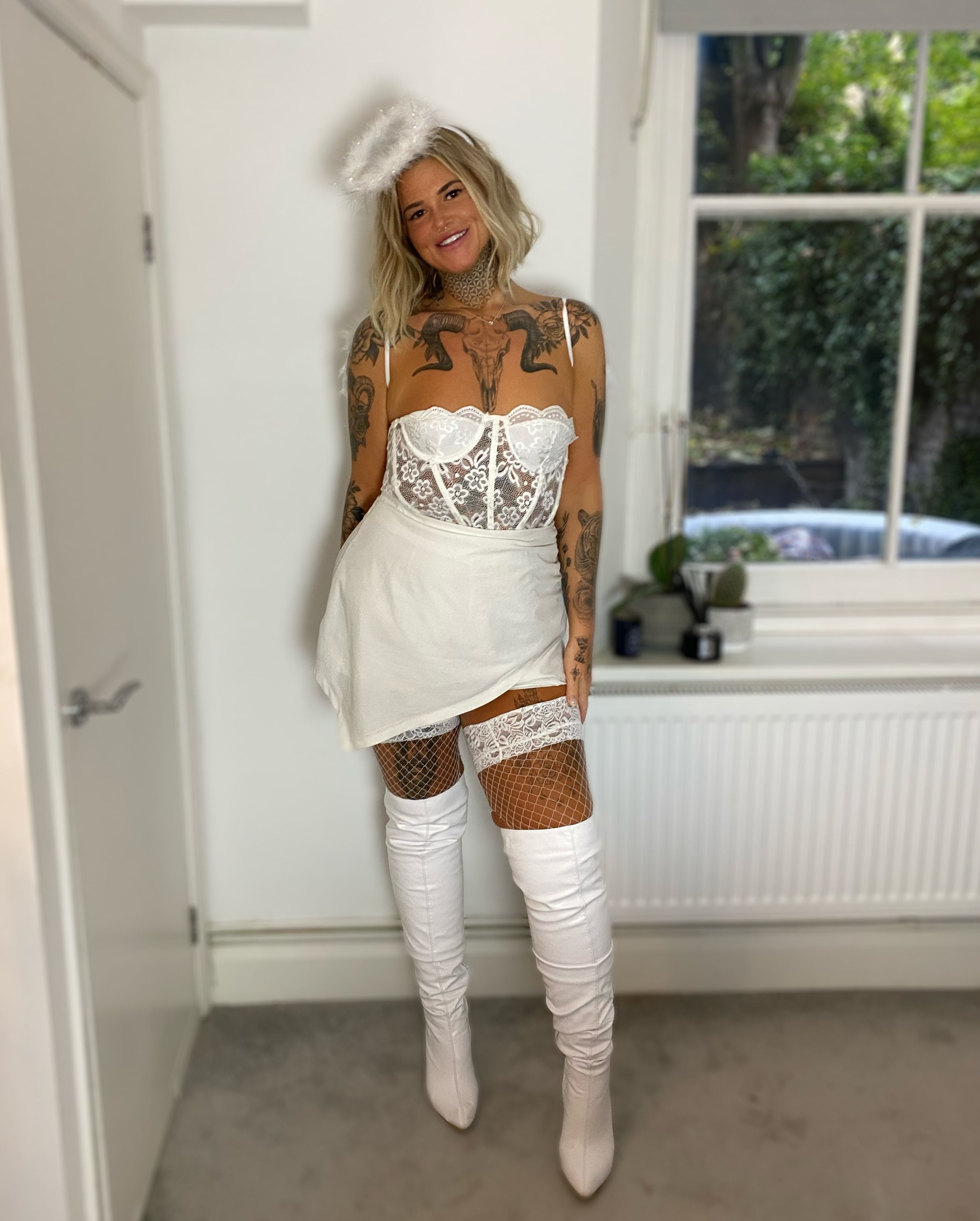 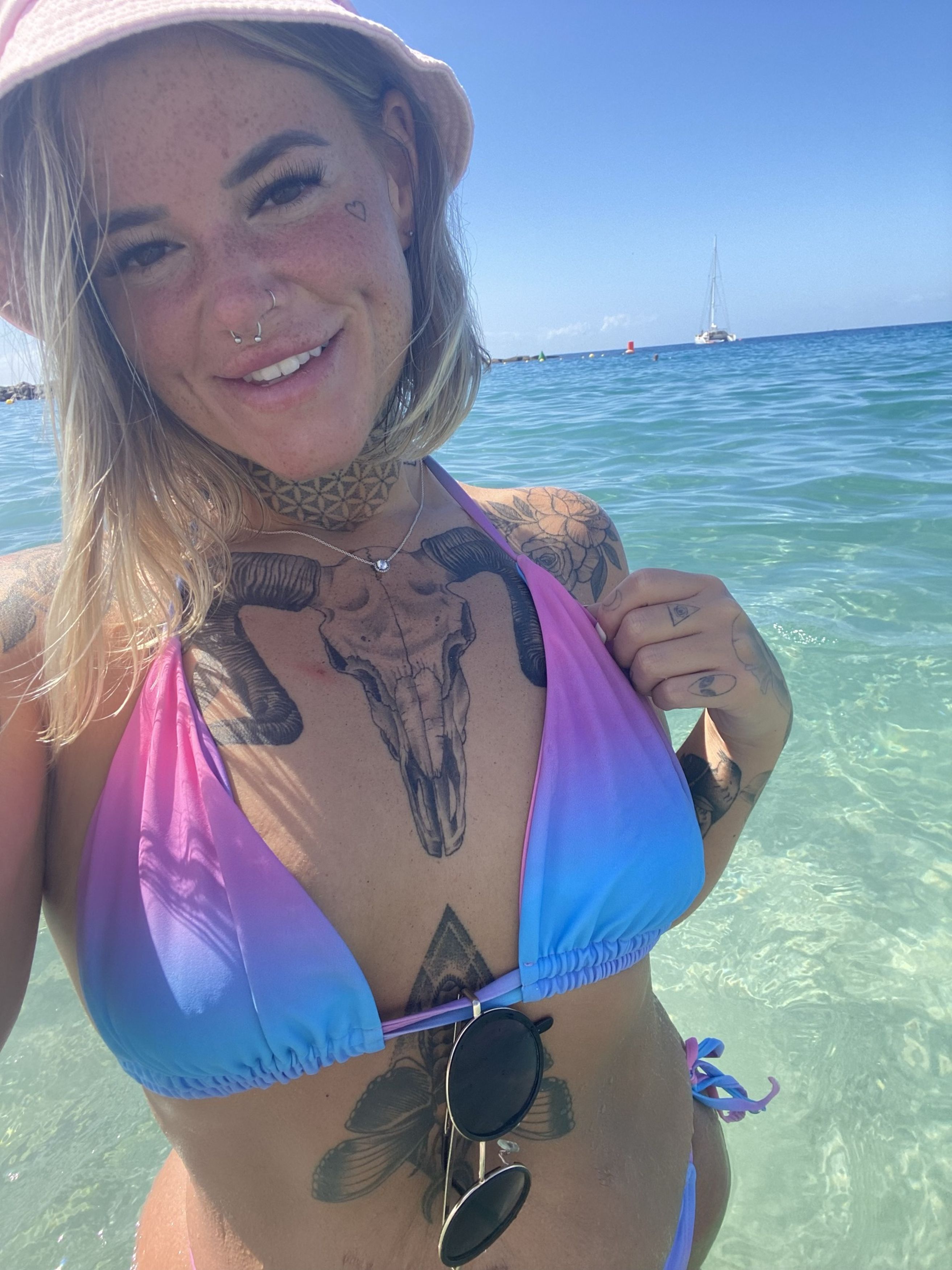 The 25-year-old said she'd always been a chubby child but being called 'fatty' and singled out because her clothes didn't fit properly at school made her feel 'horrible' and insecure of her larger frame.

The content creator claims she later got stuck in a 'vicious cycle' of emotional binge eating that saw her fork out around £600 a month on takeaways for two years and topple the scales at 25 stone.

But it was a friend declaring they were 'sickened' by the amount she was eating that gave her the wake-up call and spurred her into action to have the procedure this February.

After years of yo-yo dieting and a 'self-destructive' relationship with food, Scarlet now leads a healthier lifestyle, has dropped seven dress sizes and claims she feels like a 'new person'.

Her impressive transformation means 'popular kids from secondary school' now try messaging Scarlet because they can see 'how good she is looking now' – and while she admits it is an ego boost, her message to them is a firm 'please do one'.

Scarlet, of Chelsea, London, said: "Life is actually amazing. I'm a new person and cannot recommend this surgery enough for anyone who struggles – it's changed my life.

"I now wear clothes which I'd never have had the confidence to wear before. I can really express myself and get some more skin out.

"I went on a holiday a month ago and wore a bikini and felt amazing. It was so weird but felt so good to wear a bikini for the first time in my life.

"It was liberating. I was just me and no one looked at me weirdly. I wasn't worrying about anything.

"Before I'd always wear a full-length swimsuit and would be feeling self-conscious. I was trying to hide my belly even though you could still see it, it was a comfort blanket."

Scarlet said she lacked confidence at school so when she was in school other girls would wear 'cute' skirts during the summer months, while she'd be reluctant to show her legs.

Scarlet said: "I was always chubby as a child.

"People would just laugh and call me 'fatty' and whatever else. I definitely got discriminated against because of my size.

"They said things like 'here she comes' and 'don't swing back on your chair you'll break it'.

"At the end of primary school I started being more self aware that I was a big girl. There wasn't really many other big people and I started thinking 'well, no one else really looks like me' and felt like I stood out.

"It was horrible because I didn't have the confidence I do now. Children get picked on for being the chubby one and back then it really affected me that's probably why I had the mindset of 'if I want to have friends in college I need to be slim like everyone else'."

The former carer said she gained weight during her childhood years to her early teens but just before starting college lost around ten stone.

The 25-year-old said that later during her binge eating period which lasted for two years she'd spend around £15-£20 a day on takeaways like fried chicken, pizza or kebabs.

Lunch: Sharebag of Doritos and a bag of chocolate buttons or 10 pieces offried chicken with chips and plenty of ketchup.

Breakfast: Omelette with ham, chilli and cheese with baked beans. To drink, water or a little fruit smoothie.

She'd also drink a 1.5 litre bottle of full fat coke every day and splash out up to £10 on snacks like prawn cocktail Pringles or chocolate buttons.

Scarlet said: "I had a really bad food addiction. I've always been madly in love with food. I had a love-hate relationship with it. It was definitely self-destructive and wasn't good for me as I wasn't eating properly.

"During that two year period I was pretty much having takeaways every day.

"I was a binge eater. It was definitely an emotionally eating problem. If I was sad food would cheer me up and then I'd be sad again because I was like 'oh my God I'm eating again'. It was a vicious cycle that I couldn't get out of.

"I was binge eating with the friend I was living with at the time and my other friend would be like 'oh my God, this is the biggest I've ever seen you.'

"It was a wake-up call. I didn't realise how big I was. She came around and was cooking us a roast one time and we'd gone and got a Mcdonald's just before the dinner and she said 'Jesus, I didn't know how much you were eating'.

"She said she felt a bit sick by how much she saw me and my friend eating."

Scarlet was a dress size 24-26 when she was at her largest at around 25 stone.

She said she'd get out of breath when climbing the stairs and would avoid rides or roller coasters out of fear she wouldn't fit into their seats.

Scarlet said: "When I looked in the mirror I saw that I needed help.

"I was unhealthy and unfit as sometimes I would be breathing heavily but I never hated myself. I'd had enough of being this person that sat in doors eating all day, that was my only happiness. I got fed up of that and it was time to stop.

"I had to get an extender belt on the aeroplane. It's so embarrassing having to put your hand up and ask for one. I was trying to squeeze my tummy in even if it was uncomfortable. It does feel shameful because people do look and they're thinking 'oh my God, she wants that belt'.

"I just wore the same black leggings all the time and a white top and a big coat to cover up the rest of me.

"I kind of feel disgusted in myself [when looking at old pictures]. That sounds really harsh but I don't know how I got to that point and didn't realise I was that big and unhealthy. I watch videos and I'm moving and can't even breathe, it's disgusting to see myself in that way."

The art lover said that after years of 'struggling' with yo-yo dieting she travelled to Turkey for the procedure to remove 80 percent of her stomach, which cost her around £2,800.

Just before her surgery she weighed 23 stone six pounds and was a size 22.

Now weighing 13 stone four pounds and a size 12-14, Scarlet will soon be getting plastic surgery to have liposuction and her excess skin removed.

She's also since gained a healthy relationship with food and goes to the gym around four to five days a week.

Scarlet said: "Now I'm so active and have so much more energy. I look healthy and feel healthy and when you do that, everything feels good.

"People are like 'oh my God, you look so different'

"I've had the popular kids from secondary school now follow me and try messaging me and stuff like that. Every now and again they'll like a video or a picture and a few months ago someone messaged me saying 'hi' or whatever.

"I would just ignore or delete it because I obviously don't want to know anything about them.

"They were the ones taking the mick out of little things about me about how I look like how my blazer didn't do up or my trousers look different to everyone else's because they weren't the normal skinny ones. 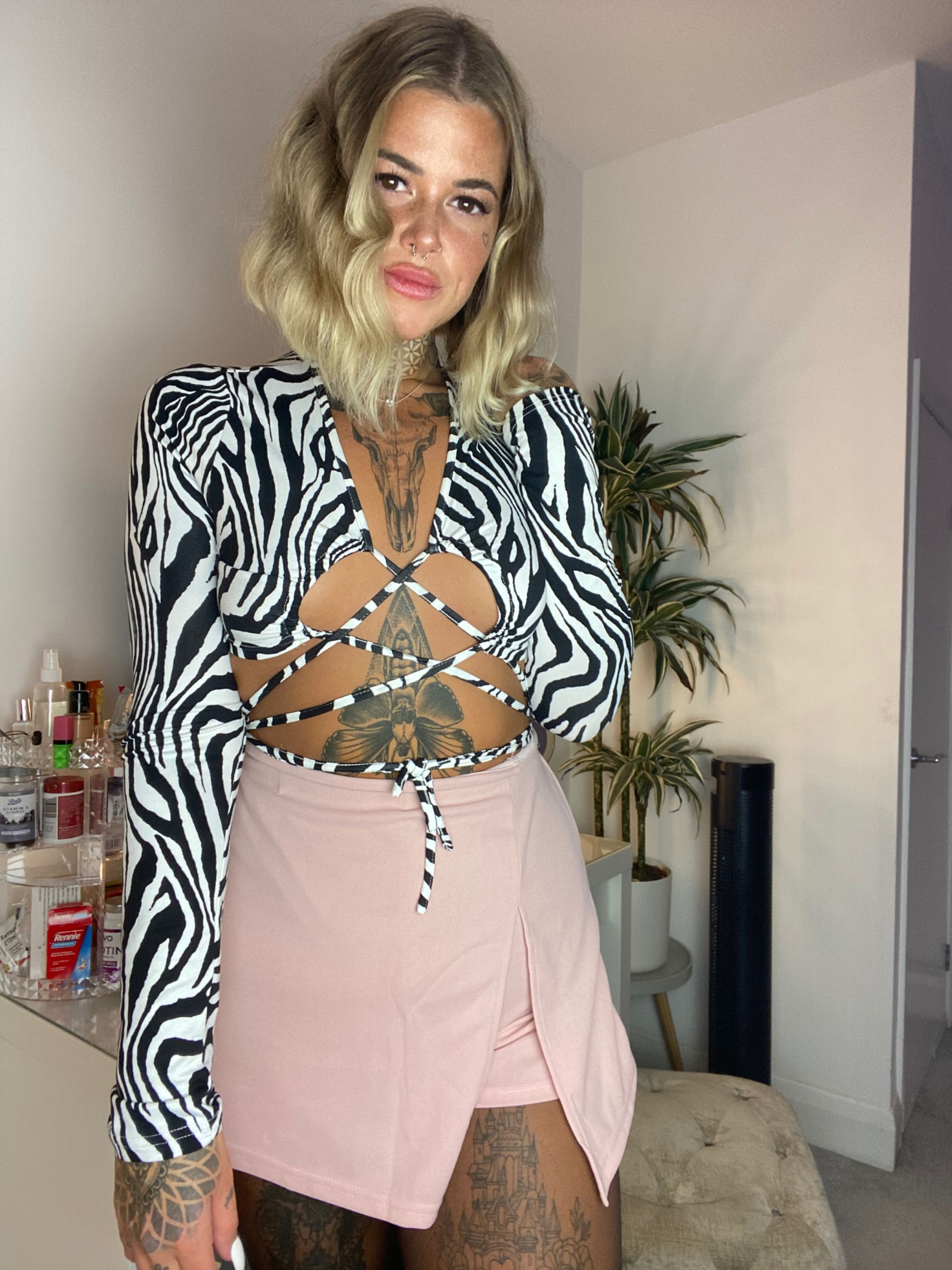