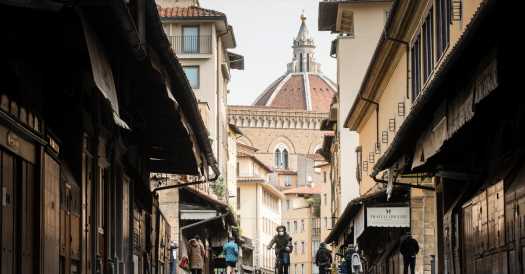 FLORENCE, Italy — “Ponte Vecchio lives on Americans,” said Fadi Ayshoh, retail director of the Gold Art boutique, as he optimistically positioned a five-carat diamond, priced at 160,000 euros, in the window. “This is going to sit here until the Americans come back. Then it will sell in a heartbeat.”

Hope has been rising in recent days among the jewelry shopkeepers on this medieval bridge, ever since Italy dropped quarantine requirements for travelers from the European Union, the United Kingdom and Israel, and opened its doors to a handful of flights for Covid-tested passengers from the United States and other countries.

“This summer, we won’t have the numbers we had in 2019, but we’ll have good-quality people,” Mr. Ayshoh said. “People who really love Italy.”

Florence’s Renaissance past is most vividly evident on the Ponte Vecchio. Its cobblestone thoroughfare is lined with 48 pocket-size jewelry storefronts and a jumble of gravity-defying work spaces propped up beyond the bridge’s girders. 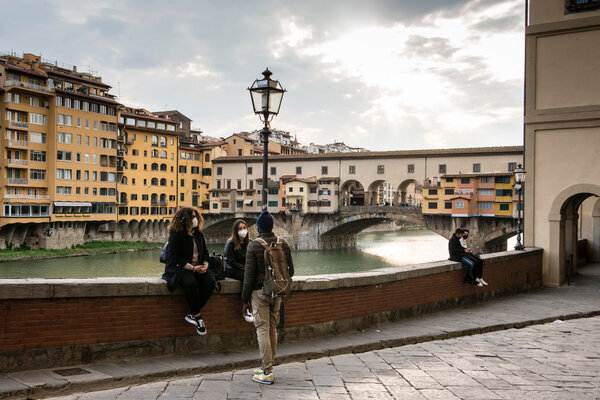 Built in 1345 at the narrowest crossing of the Arno River, Ponte Vecchio originally was a street market of butchers and fishmongers, but after the Medici’s Vasari corridor was built so the family could traverse the bridge in comfort, a 1593 decree by Ferdinando I de’ Medici replaced those foul-smelling operations with goldsmiths and jewelry dealers. To this day, the shops are reserved exclusively for jewelers, although most of the artisans who collaborate with them have relocated just beyond the bridge’s high-cost commercial strip.

Like much of the rest of the city, the bridge’s businesses were both nurtured and battered by tourism — and then all but starved by its sudden, pandemic-induced absence.

Before the spread of the coronavirus, Gold Art was grossing 10 million euros (about $12.15 million) a year. Now, Gold Art’s three Ponte Vecchio locations can go weeks without a single transaction, yet each site still must pay €15,000 to €25,000 in rent every month.

Its best sellers had no brand names: Crafted by artisans in the vicinity, the Florentine gold pieces, with their delicate saw work and shimmering engraved surfaces, could trace their fabrication methods to Renaissance techniques developed along this very bridge.

“Our customers bought them like candy,” Mr. Ayshoh said, “because you can’t get this Florentine workmanship anywhere else in the world.”

The city goldsmiths have long been celebrated as virtuosos of engraving, fretwork, niello inlay, Damascene inlay, repoussé and other highly specialized techniques. And a number of the Renaissance’s artistic titans arose from their ranks, including Donatello, Brunelleschi and Ghiberti.

In 2019, hotels and vacation rentals had 11 million visitors, and some of the city’s 367,000 residents marched in the streets to protest the onslaught. By 2020, the visitors’ abrupt disappearance left the city center all but empty and the municipal budget with a shortfall of €160 million, 25 percent of its total.

“A city like Florence was invaded —  fortunately! — by tourism,” said Roberto Vaggi, the second-generation owner of S. Vaggi, his family’s antique jewelry and silver business on the corner of Ponte Vecchio. “How else could a city of this size support a bridge full of luxury products like these?”

These days, two S. Vaggi employees have relocated from the sales floor to an upstairs office to handle email and phone requests from longtime clients — the way business here is done now. Like almost all of Ponte Vecchio’s businesses, S. Vaggi has no online shop.

Among Mr. Vaggi’s antiques are honeycomb-cut gold pendants with diamonds, repoussé silver tureens and the micro-mosaics that were the original Grand Tour travel souvenirs. Doubtless, some returning tourists will be looking for such items, but others will have different tastes.

Cassetti, a family-run set of four stores on Ponte Vecchio, started as silversmiths in 1926. Today, its windows are dedicated to multinational behemoths like Rolex, Vacheron Constantin and Cartier — brands “that customers can buy in any city in the world,” the owner Filippo Cassetti admitted. Yet he also boasted of introducing status-symbol watch sales on Ponte Vecchio, insisting that “luxury offerings like mine raise the caliber of tourism, just like a five-star hotel.”

When the region’s latest lockdown ended on April 17, only the luxury watches at Cassetti attracted a steady stream of customers. The rest of Ponte Vecchio was desolate, lacking the usual shoulder-to-shoulder crowds of selfie-shooting visitors.

Most of the diminutive shops didn’t open at all, still closed up by madielle, the distinctive shutters of heavy wood and iron fleur-de-lis hinges that have protected them through the centuries.

“We used to see hundreds of people a day in our shops,” lamented Giuditta Biscioni, president of the Association Ponte Vecchio, which represents the bridge’s businesses. “Now we’re all alone.” She said she didn’t have annual income figures, but estimated that member businesses had seen earnings fall by 80 percent in the last year.

And the artisan community working with them are even more vulnerable, she said, adding, “When we’re closed, they’re on their knees.”

While the government permitted family-run and independent workshops to stay open throughout the lockdowns, most had little to do — and artisans were eligible for only a few small stimulus payments. Store owners received some government compensation for closing, although it was only about 3 percent of lost income. Employees received partially funded furloughs, but there have been complaints about extreme delays in payments.

“We’re eating up the earnings from the past now,” said Daniela Messeri, holding a lacy gold bracelet at Nerdi Orafi, her family’s atelier since 1948. “We’re just preparing things for the day when tourists might reappear.”

Nerdi, whose handcrafted jewels reflect classic Florentine artistry, is one of 20 workshops in the Casa dell’Orafo, a monastery just north of Ponte Vecchio that four centuries ago was converted to studios for engravers, stone setters and goldsmiths.

The Casa dell’Orafo’s artisans still serve Ponte Vecchio’s shops, but Nerdi itself flourished during the travel boom, when well-informed tourists bought directly from the workshop. “All of us in the center of Florence live off of tourists,” Ms. Messeri said, as her goldsmith engraved a gold ring with dainty blossoms at Nerdi’s bench. “But some of us still try to carry on the old traditions.”

At Fratelli Piccini, a boutique dating from 1903, the fourth-generation owner, Elisa Piccini, employs one of the few goldsmiths still on Ponte Vecchio. “There should have been regulations to help artisans before,” she said with a sigh.

Her goldsmith of 21 years, Carlotta Gambineri, soldered a detachable pendant with garnet beads for a pink tourmaline collar — one of the many custom designs she has created. “Some traditions merit support,” Ms. Piccini said.

As does the city itself, she added, gazing out the boutique’s picture window at the Uffizi museum looming above the river.

“The city of Florence is like a museum,” Ms. Piccini said. “And a museum requires a ticket for entry and a fixed capacity.”