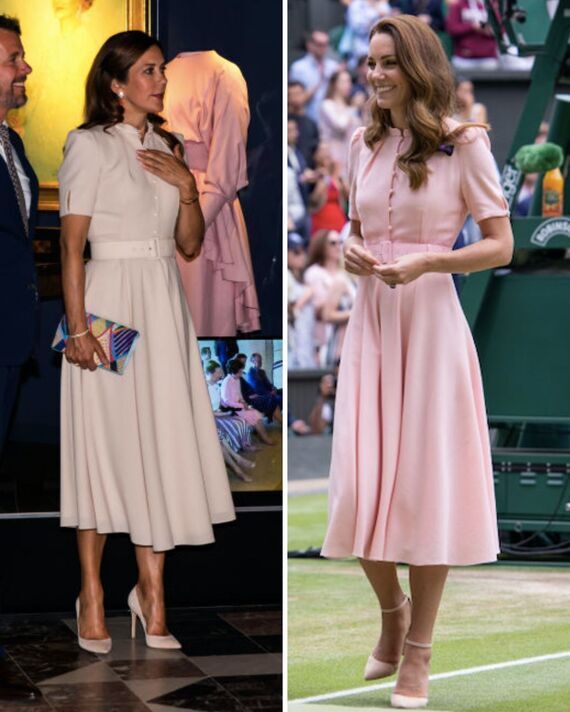 Kate, Princess of Wales and Crown Princess Mary of Denmark are both style icons in their own right, but they are often compared for having similar styles. A year apart, they were spotted in the same Beulah London dress, a royal favourite.

However, despite their age gap, the Princesses share a similar taste when it comes to what to wear.

But she wasn’t the first to don the chic gown, with Crown Princess Mary donning it a whole year prior in June 2020.

A fashion expert spoke to Express.co.uk about the royal duo’s style similarities.

Daena Borrowman, PR, Social and Digital Marketing Manager at jewellerybox, said: “It must be noted that so many British and European royal women are fashion icons in their own right and their choices of clothing often align because the perks of being royal include access to the world’s most sought-after fashion houses and designers.

“The Duchess of Cambridge and Crown Princess Mary of Denmark are near style twins.

Their similarities might not stop with clothes, with the expert pointing out they both have “athletic statures and brunette”.

Daena concluded: “Kate and Mary have even been spotted on different occasions wearing the same style of dress, albeit with differences in colour from Beulah London, Emilia Wickstead, Jenny Packham and many more.”

Kate looked stunning at the tennis tournament in a blush pink version of Beulah London’s Ahaha Dress, priced at £695.

The dress, which boasts a tailored bodice and full midi-skirt, is described as a “classic, wardrobe must-have crafted from a beautiful creamy beige wool crepe”.

Kate paired the dress with nude strappy heels and wore her hair in big, bouncy curls.

She also wore a special accessory marking her relationship to the sport, a green and purple ribbon.

This signifies that she is a royal patron of the All England Lawn Tennis & Croquet Club (AELTC).

While Kate looked marvellous in the 50s-inspired Beulah London creation, complete with structured shoulders and a belted waist, she was not the first royal to do so.

Denmark’s Crown Princess attended the opening of the an art exhibition at Frederiksborg’s National History Museum on June 16, 2020, wearing exactly the same dress.

However, rather than blush pink, Mary opted for a subtle beige. However, everything else was the same, from the buttons down the front to the belted waist and flared skirt.

The Crown Princess accessorised with pointed-toe pumps in the same shade, and a pop of colour bag in blue, pink, yellow and green.

Like Kate, she went for big, bouncy curls for this particular engagement.