Kate Middleton and Princess Diana: How royals made statement on their wedding days Kate Middleton, the Duchess of Cambridge, tied the knot with Prince William back in 2011. Sadly, the bride never got to meet her mother-in-law, due to the tragic death of Diana, Princess of Wales, in August 1997. While they may have never been able to meet, the pair do share a link – and it comes down to their wedding dresses. Express.co.uk has taken a look at how their clothes paved the way for trends in years to come.

For her wedding, Kate wore a stunning satin and lace dress designed by Sarah Burton for Alexander McQueen.

While the design of the two dresses were very different indeed, it seems that the royal outfits did bear a similarity.

“Both Kate’s and Diana’s dresses had definite regal status from both design aspects and the luxurious fabrics used,” she said.

“Both ballgowns, with lace details and sleeves they were sensitive to royal traditions while holding their own and making a statement.” 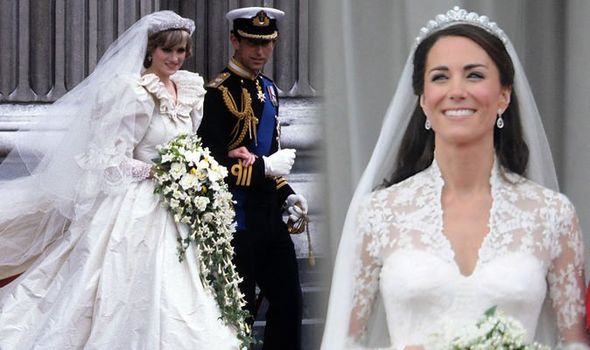 Kate Eavis, who runs the wedding blog Magpie Wedding, agreed, explaining that both designs had a huge influence on the future designs of dresses.

She said: “While Kate’s and Diana’s dress were very different, they really impacted the world of bridal design and changed the direction of style.

“Kate chose to go simpler than Diana, with subtle yet beautiful styling (we were in the middle of a global recession after all) whereas Diana went all out with puffed sleeves, huge train and veil.”

Express.co.uk also sought the expertise from Terry Fox, a high end couture wedding dress designer who has worked with the Emanuels and Zandra Rhodes after the wedding.

“Yes, there are some similarities in the two dresses,” she said. 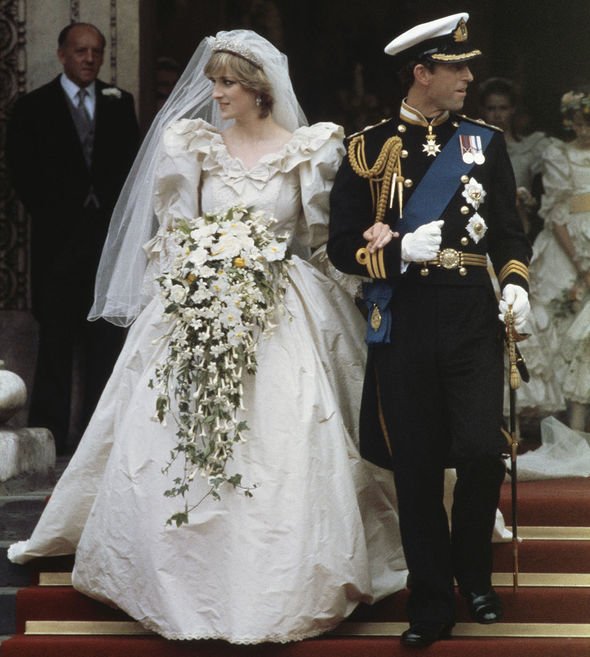 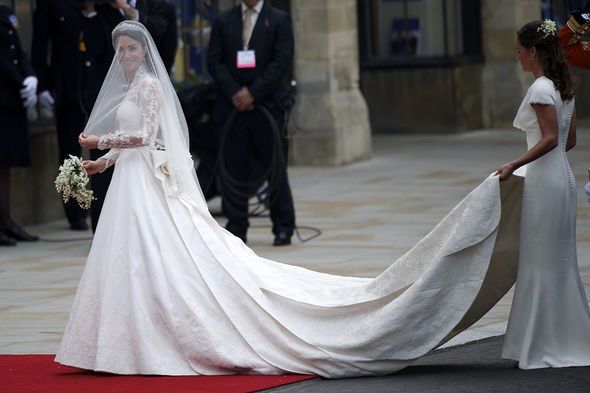 Terry detailed how both of the dresses were “nipped in the waist”, had full skirts, and close fitting bodices.

“Both created a huge refreshing change in the design of bridal wear trends, instantly,” she added.

It has become a tradition for royal brides to wear a wedding tiara to their nuptials.

Kate wore the Cartier Halo Tiara, but what headpieces did other members of the Royal Family opt for?

Who: His Royal Highness Prince Harry and Meghan Markle (now the Duke and Duchess of Sussex)

Dress: Meghan wore a dress designed by Clare Waight Keller for Givenchy. The white dress was made of silk and had a boat neckline. The veil was an incredible 16 feet long.

Tiara: The Duchess of Sussex chose the Queen Mary diamond bandeau tiara, made in 1932, with a flower brooch in the middle from 1893.

Cake: The cake was a made by Claire Ptak, based in London. It was lemon and elderflower cake, decorated with peonies and buttercream icing.

Who: Princess Eugenie of York and Jack Brooksbank

Dress: Eugenie’s dress was made by Peter Pilotto and Christopher de Vos and had a full skirt, long sleeves and was ivory in colour. The dress has a low back designed to show Euegnie’s scar from scoliosis surgery, a cause she has spoken out about in the past and since the wedding.

Tiara: She wore the stunning Greville Emerald Kokoshnik Tiara, lent to her by the Queen. It has a huge emerald in the middle.

Cake: The cake had five tiers and was a red velvet and chocolate cake made by London-based cake designer Sophie Cabot.

Who: Prince William and Kate Middleton

Dress: Kate wore a dress made by Sarah Burton for Alexander McQueen. The satin gown featured long lace sleeves. It had a nine foot train and the lace featured roses, daffodils, thistles and shamrocks.

Tiara: Kate borrowed the Cartier Scroll Tiara, now known as the Halo tiara. It bought by the Queen’s father, the future King George VI, for his wife Elizabeth.

Cake: William and Kate opted for a traditional fruit cake with eight tiers. It was decorated with sugar flowers. William also had an additional chocolate biscuit cake was made from a Royal Family recipe.

Notable guests: Guests included family and friends of the couple, as well as members of the military and people who work with charities the pair support.

Dress: Diana’s gown was designed by the Elizabeth and David Emanuel and had an enormous 25-foot train. The dress was ivory and featured lace. In typical 80s style the rather large dress had huge sleeves. The dress was badly creased during the carriage ride to the ceremony, as it was so large.

Cake: Diana and Charles had a number of cakes including a five-foot-tall layered fruitcake. Another cake was made by Belgian pastry chef S. G. Sender and another by Chef Nicholas Lodge.