Kim Kardashian reporting for duty! She went all-in with her latest camouflage look, donning thigh-high boots and a plunging top.

Kim Kardashian appears to have a new go-to look for spring, donning a super chic green camouflage outfit. The 40-year-old showed off her military tribute in three Mar. 22 Instagram photos where she looked like a sexy soldier. Kim wore a plunging sleeveless super-short cammo mini-dress that barely grazed the top of her thighs. She paired it with matching thigh-high boots that widened as they went up her legs. That meant she was able to wear them in a pulled-down slouched style for several of the snapshots.

In the first photo, Kim showed off some skin on her trim upper thigh by letting one of the boots drop down towards her knee. For the second picture, Kim sat down on the stairs of her home, flashing the back of her thighs. She reached her arms outward from her sides and made a duck-lip face for the camera.

In the third photo, the SKIMS founder showed off the outfit’s versatility. She had her boots pulled up all the way so that they resembled pants, and held on to the bottom of her mini-dress. Except for a flash of upper thigh skin, it could have passed for a sexy cammo  jumpsuit. Kim seems to be dressing extra hot these days, after she filed for divorce from Kanye West, 43, in Feb. 2021.

Sadly, Kim didn’t tag the photos so its unclear what label she was wearing. Her stylist Veneda Carter also posted the photos to her IG page, but she didn’t include any wardrobe tags either. Veneda did share in the caption, “yeaaaaaaahhhh we do it that way,” so the two appeared to have collaborated on Kim’s fierce look. 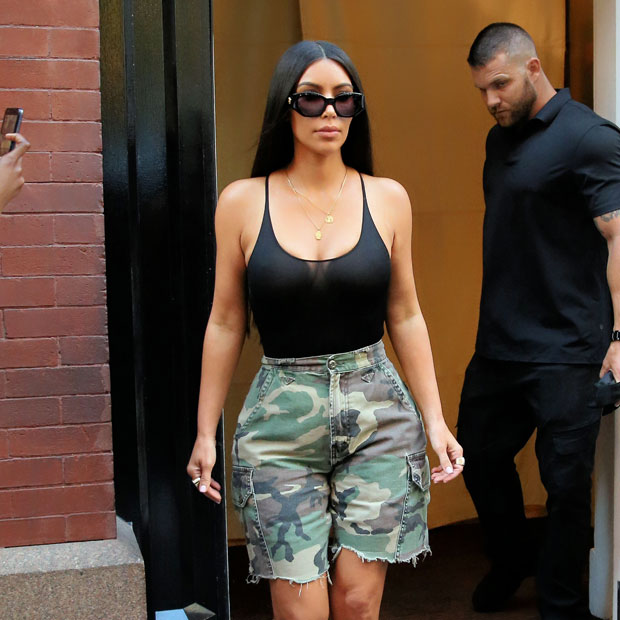 Aspiring lawyer Kim already went to war when it came to taking the California “baby bar” exam, which was so intense she bought Depends adult diapers in case she had to pee during the grueling seven hour test. She shared her experience on the Mar. 18 season premiere of  Keeping Up With The Kardashians. While she didn’t don camouflage for the exam, she did explain to fans how it was an automatic fail if she got up out of her chair at any point during the test, which featured with four hour-long essays and 300 multiple-choice questions. Though she had the diapers on hand, Kim fortunately didn’t need them as she completed the exam in her allotted time.