To a casual observer, the elegant blonde woman in a caramel turtleneck watching the goings-on at Madrid Horse Week from a private box on Sunday could have been any high-flying member of Spanish society.

In fact, her name is Marta Ortega Pérez, the youngest daughter of Amancio Ortega, the world’s 11th richest person and reclusive founder of Inditex, the parent company of a portfolio of world-famous high street brands including Zara, Massimo Dutti, Uterque, Stradivarius and Bershka. Now, Marta has been identified as the successor of that empire. 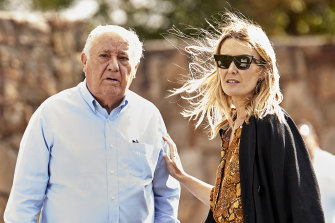 Marta Ortega Pérez and her father, Amancio Ortega, one of the wealthiest clothing retailer in the world, in 2018.Credit:

The man with his arms wrapped around Marta’s waist was her husband of three years, former model agent Carlos Torretta. With them was their one-year-old daughter Matilda and her eight-year-old son Amancio, from her previous marriage to professional equestrian Sergio Álvarez Moya. Although Marta prefers to avoid the limelight, she and her family are exhaustively covered by Hola!, Spain’s answer to Hello! and the Spanish edition of Vanity Fair.

You can’t blame them; her friends include Queen Letizia, Athina Onassis and Jessica Springsteen. When she married Torretta, she wore four Valentino couture creations, flown in by private jet and delivered personally by the label’s creative director, Pierpaolo Piccioli. Their 400 guests enjoyed performances by Norah Jones, Jamie Cullum and Chris Martin, and it was all captured by the late legendary fashion photographer Peter Lindbergh.

Despite all these trappings, and her front-row seat at Valentino couture shows, the 37-year-old generally steers clear of the fashion party circuit, favouring the equestrian crowd instead. For the past 14 years, however, she has also held an integral – if undefined – role at her father’s company. Come April, she will become fashion’s most powerful woman you’ve never heard of, when she assumes the role of chairman of Inditex. 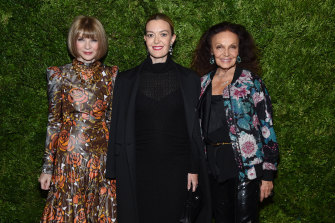 It’s a familiar story: company founder grooms son or daughter, before handing over the reins to their empire. It’s a compelling one, too – the combination of family and business can be explosive, as we’ve seen only too clearly in the stranger-than-fiction plotline of Ridley Scott’s new House of Gucci film, as well as television dramas such as Succession and Empire.

In a rare interview with the Wall Street Journal in August, Marta claimed she had no plans to take a more formal leadership role. You could almost imagine Succession’s Shiv Roy breezily saying the same thing to a reporter, despite her ambitions for the top job. But that’s where the similarities with the HBO hit end.

Although she has never had an official job title, Marta has been the chosen one from the start. The only child of Amancio and his current wife, Flora Pérez Marcote, she has two older siblings from her father’s first marriage to Rosalía Mera Goyenechea, with whom he founded Zara in 1975. They are Marcos, who was born with cerebral palsy, and Sandra, 53, who became Spain’s richest woman when she inherited her mother’s 7 per cent stake in Inditex in 2013 and devotes her time to Fundación Paideia Galizak, the charity Rosalía founded to support people with mental and physical disabilities.

Marta, meanwhile, quite literally worked her way up from the shop floor, having started her career as a sales assistant at Zara’s King’s Road store (the Duchess of Cambridge’s favourite branch) in 2007, after graduating from the European Business School in London. “The first week, I thought I was not going to survive,” she told the Wall Street Journal of that time. “But then you kind of get addicted to the store.”

If you’ve ever shopped in a Zara store (and, let’s face it, most women have) you’ll know it will have been a demanding job, replacing products on rails as quickly as they sold. Since Zara opened its first UK store in 1998, it has set new speed records in bringing catwalk trends to the high street, ultimately replacing Topshop as the fashion girl’s destination of choice. Yet, unlike Boohoo and its ilk, it remains that rare, affordable beast where even designer addicts aren’t embarrassed to shop. And Marta is largely responsible for that.

Despite having no official job title until now, her role has been described as “overseeing Zara womenswear design and merchandising.” She has been responsible for setting Zara’s image apart from its high street competitors with commercially savvy decisions such as putting stores on streets dominated by designer boutiques, hiring big-name photographers like Mario Sorrenti and Steven Meisel to shoot supermodels including Sasha Pivovarova, Paloma Elsesser and Precious Lee, as well as the launch of Zara’s more high-end SRPLS line and the collaboration with KASSL Editions.

“They’re smart,” says Hattie Brett, editor of Grazia. “By using top photographers and models they elevate their positioning on the high street. I don’t know a woman that doesn’t shop there.”

It’s a strategy that has paid off – even the pandemic, with global lockdowns and forced retail closures, did little to quell our appetite for Zara: Inditex reported a 49 per cent increase in sales and profits of £1.1 billion ($2 billion) in September, defying high street trends by some distance. H&M’s sales were only 9 per cent up on the same period last year, John Lewis’s just 6 per cent.

Marta’s high fashion connections have come in useful, too – she had the late design genius Alber Elbaz, as well as Piccioli, speak to the Zara design team, rare privileges in the fast fashion world.

In terms of their approach to work, it seems as though Marta and her 85-year-old father, the son of a railway worker who began his career at 14 as a shirtmaker’s delivery boy, are cut from the same cloth. Both prefer to sit on the main floor of the company’s head-quarters in La Coruña, the Galician port city where he founded the very first Zara store, rather than in private offices, in order to “stay close to the product”.

The organisation boasts that its structure is hierarchy-free and on its careers website it says humility is a quality it actively seeks in its workers. By all accounts, Marta operates by these tenets too. “She’s very calm and polite,” says a source close to the company.

Inditex has said that yesterday’s appointments completed a “generational handover process” that began in 2011 when Amancio stepped down as chairman, and though Marta is an unquestionable asset to the company, she has big shoes to fill when she assumes her new role in April: she will succeed Pablo Isla, who has been chairman and CEO of Inditex for over a decade and has been credited with making it a $100 billion company. Indeed, shares in the company fell almost 6 per cent in Madrid following the announcement.

“I’m interested to see how Marta evolves the business,” says Brett. “She’s got to tackle some thorny issues for all high street brands, such as an emphasis on sustainability – something consumers are increasingly asking questions about.”

The source says Marta will be happy to leave the day-to-day operational and financial decisions to the incoming CEO, Oscar Garcia Maceiras, much as her father has allowed Isla to run the show.

“We can expect a natural evolution of what she does now – she has no desire to rock the boat,” they said. “Her big thing is the product; she brings the consumer perspective.”

What may change when Marta becomes chairman is a focus on Inditex’s other brands, as her current role only involves Zara womenswear. It’s likely that she will be expected to work that same magic on Massimo Dutti, Bershka and Zara Home.

There is another role Marta can play, though, and that’s as a figurehead, which Zara currently lacks as her father is so publicity-shy. When she steps up as chairman, it is likely that she will become the public face of the company, too. “Marta lives and breathes Zara, she’s grown up with the company,” the source says. “She has great respect for the brand.”

Clad in Zara most days, albeit accessorised with a Hermès handbag, Celine shoes and Marie Lichtenberg diamonds, Marta is the woman we all hope we’ll look like when we buy a new top on a lunch-break shop. For all its expensively shot campaign supermodels, the definitive Zara woman is sitting under Inditex’s nose.

Marta has said, “I will always be wherever the company needs me most.” Marta, prepare to step into the spotlight.