Mum in hysterics after son, 9, writes ‘persuasive’ note stating why he should get pocket money – but was he successful?

A MUM was left in hysterics after receiving a note from her nine-year-old son trying to persuade her to give him pocket money.

The woman shared a photo of the incredible letter on Facebook and said she was crying with laughter. 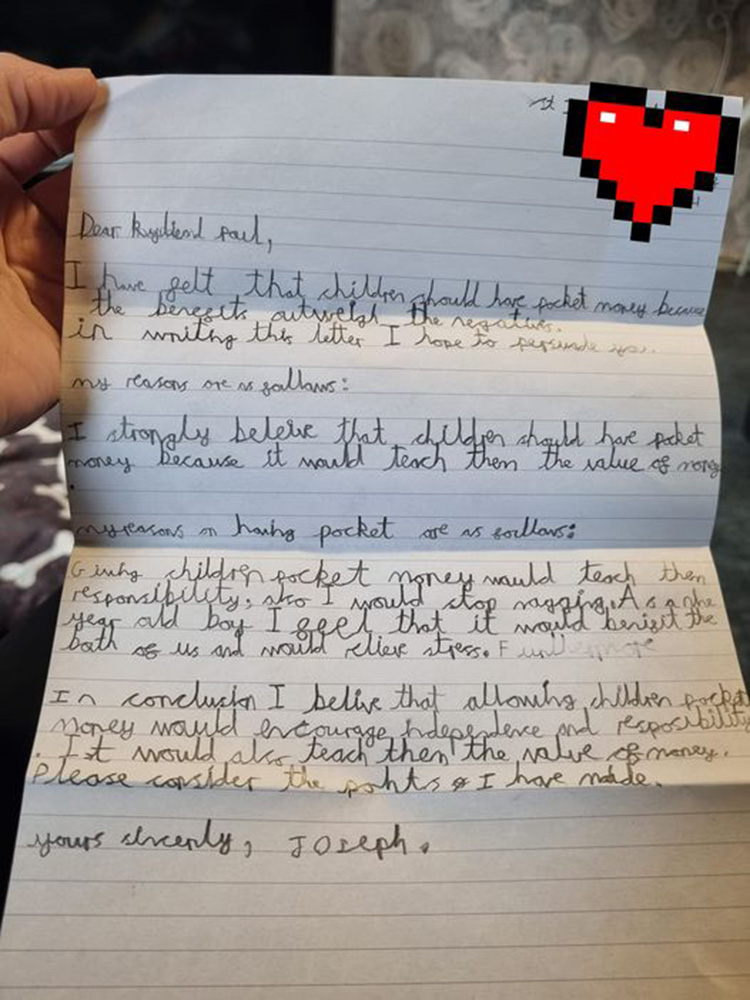 The note read: “Dear Kylie and Paul, I have felt that children should have pocket money because the benefits outweigh the negatives.

“In writing this letter I hope to persuade you.

“My reasons are as follows:

“I strongly believe that children should have pocket money because it would teach them the value of money.

“Giving children pocket money would teach them responsibility, also I would stop nagging.

“As a nine year old boy I feel that it would benefit the both of us and would relieve stress.”

He concluded the letter by saying: “I believe that allowing children pocket money would encourage independence and responsibility.

“It would also teach them the value of money.

“Please consider the points I have made. Yours sincerely Joseph.”

The ingenious letter has been liked over 2,000 times, and people have praised the boy for his efforts.

One person said: “To be fair that letter deserves pocket money.”

Another added: “That boy is prime minister material.”

So did the letter work?

It seems Joseph's efforts weren't in vain, as the mum said in the comments that she will be giving him pocket money linked to a chores list.

Previously, a mum shared the heartwarming note child left in her supermarket basket which totally changed her day.

For more viral stories, this bride shared the horrific black eye she got on her wedding night after accidentally headbutting the best man.

And this mortified woman claimed she woke up with seven blokes’ names tattooed on her hip after a drunken night in Magaluf.