A MUM has revealed how she transformed her boring bathroom into a Dalmatian-themed space for just £12.

Drew Legate, 29, from Hertfordshire, said she desperately wanted a Dalmatian patterned wall in her bathroom but her husband Adam was totally against the idea. 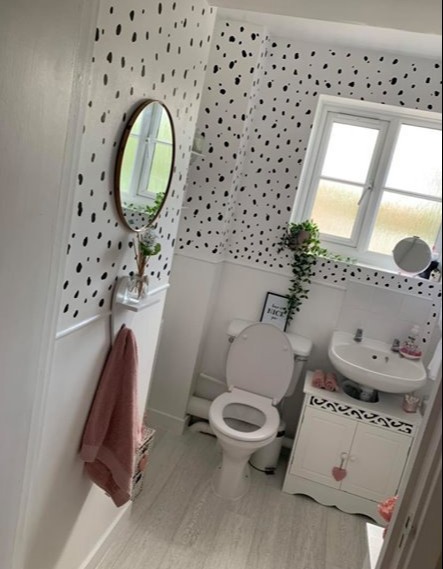 So while she worked away during Covid-19, Drew, a stay-at-home mother, decided to pick up the paint brush and give the bathroom a DIY dalmatian makeover.

She handpainted the dots using Wilkinson’s paint and got carried away painting spots for over eight hours despite Adam joking he would put a ‘sledge hammer’ through the wall if she did it.

However Drew got carried away and painted black Dalmatian dots all over her bathroom walls and drawers.

Drew transformed the bathroom then shared her incredible results to a Facebook DIY group. 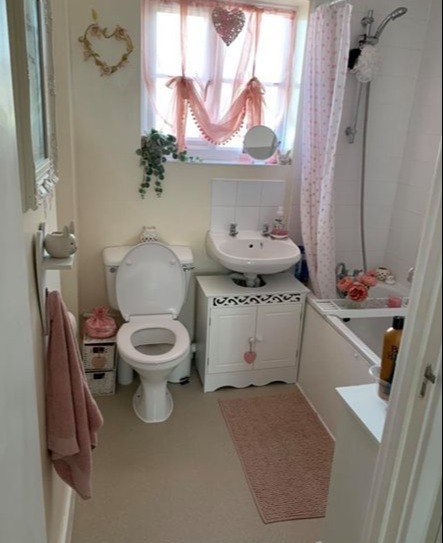 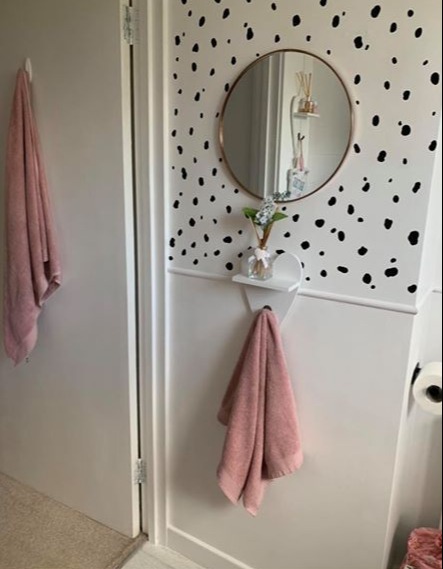 She wrote: “Hubby said no I can’t have a Dalmatian wall. Okiessss I’ll do them all then hahaha.

“Oh and some drawers. Would you put dots on the wall with the shelves? I'm tempted lol.

“These are hand painted – it took me many many hours in the evenings a few here and there. I used black satin wood from Wilko so won’t be the easiest to get rid of I’m sure lol!

“The white railing was £2.50 a length I used two and stuck them on with glue.” 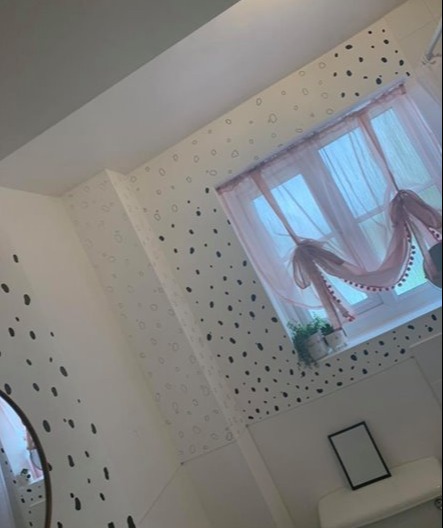 The post instantly raked up nearly 4,000 likes and hundreds of comments with many strangers praising Drew’s ‘brave’ bathroom makeover.

The mother said she only received one negative comment by a person who suggested she was selfish for going against what her husband wanted.

But Drew said despite being really unhappy about his wife’s plans to paint the bold design, Adam was pleasantly surprised when he returned home and said it looked “bright and fresh.” 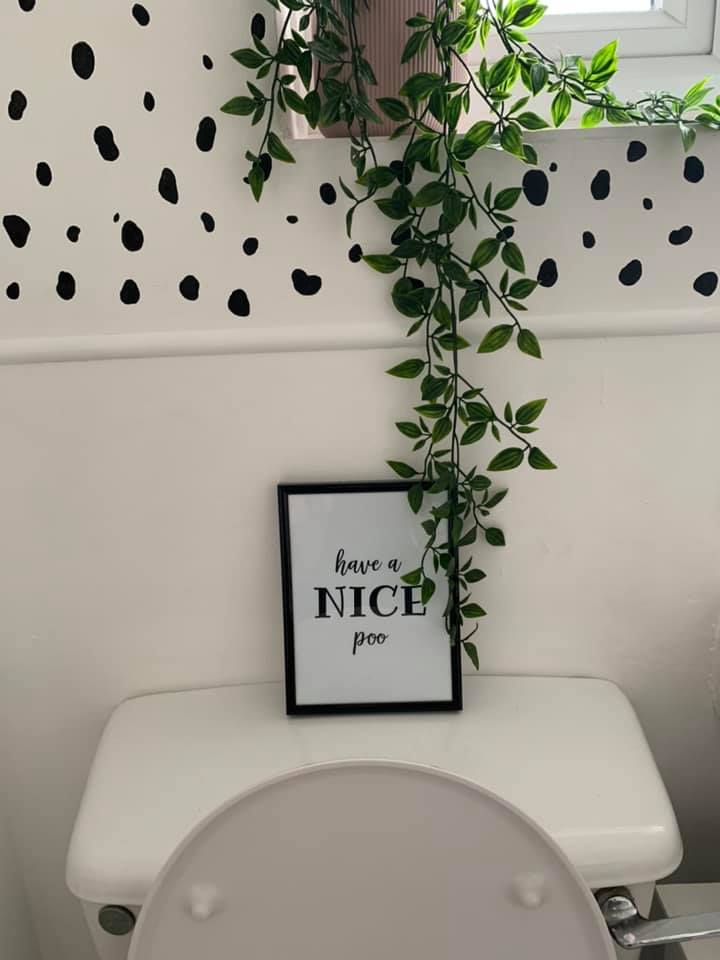 Drew said: “I had wanted to do a Dalmatian wall in the bathroom for ages but my husband said he would put a sledge hammer through the wall if I did it!

“He has been working away from home so I decided to start it anyway and see what he says when he got home!

“It cost me £12 for the black satin paint I used to paint the dots and a few accessories from Matalan.” 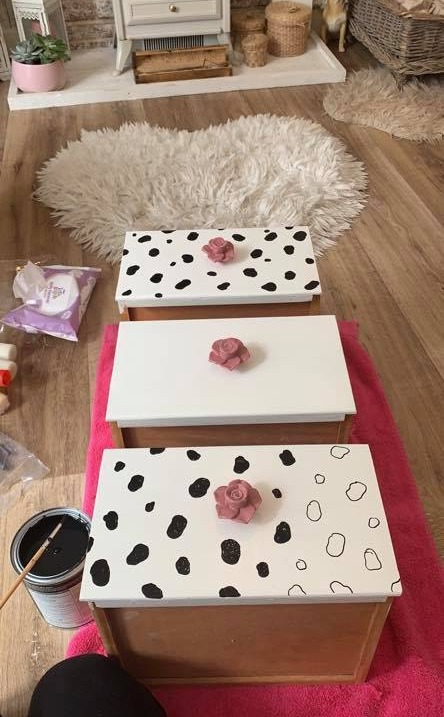 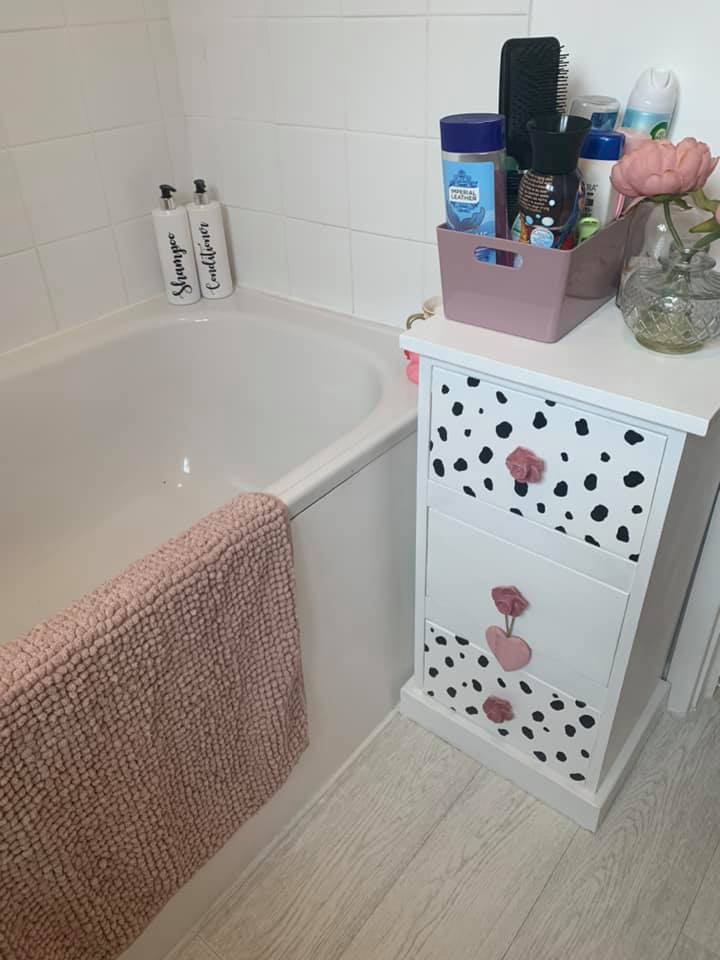 She said she drew the dots on the wall with a balck posca paint pen and then used a fine paint brush to fill the spots with black paint.

Each spot needed two to three coats of paint and Drew spent around eight hours in total painting the spots all over the bathroom.

She also used £2.50-a-length edging from Wickes to stick to the middle of the walls with no nail glue. 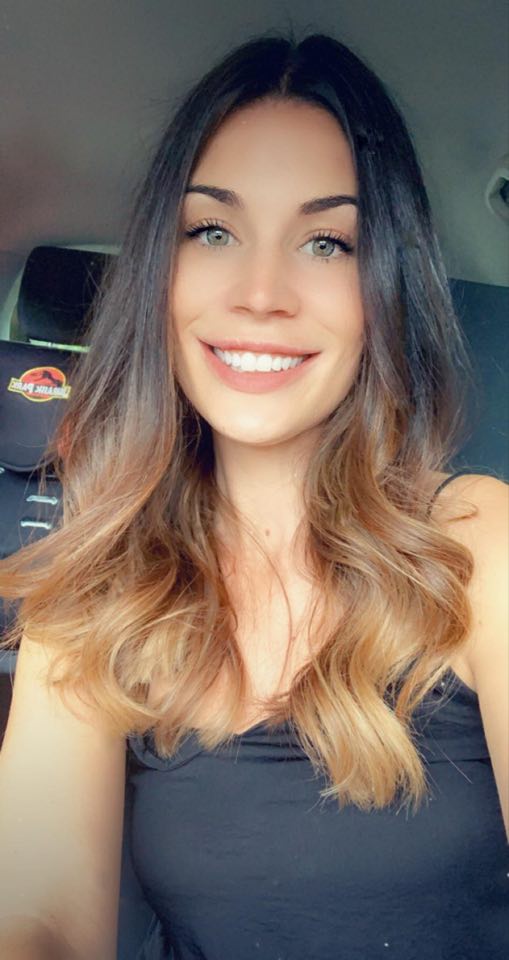 Drew said: “You wouldn’t believe how many times I would go to the toilet and end up adding a spot in a gap!

“And guess what, my husband also loves it now!” 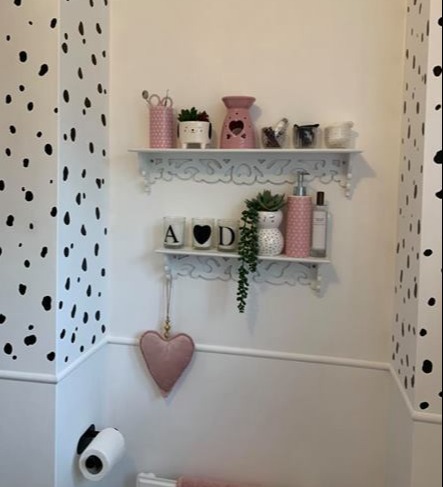 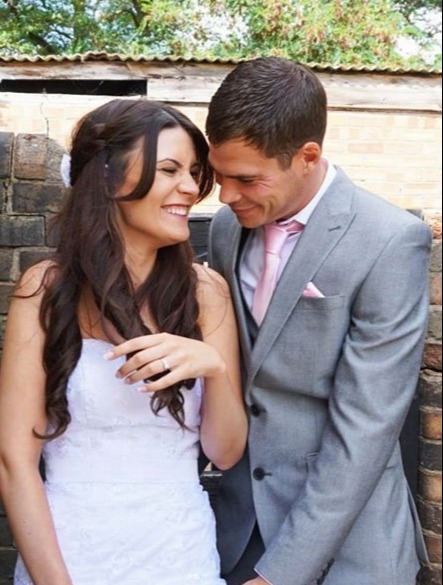 She said she was surprised and overwhelmed to see her Facebook post go viral and said she was shocked at how many people loved her bathroom DIY.

Despite the one negative comment, Drew said she is excited other families have decided to take the plunge and add a Dalmatian wall into their homes.

She is glad she was able to show them how easy it can be done using just black paint and a paintbrush.

She said: “It’s so nice to see my daft DIY project is loved by so many.

“Adam was really not happy about me doing it but when he arrived home he said it looks so bright and fresh and his words were ‘yeah it’s decent’.”

One Facebook user commented on the post: “Always when the Mr says no that really means YES go ahead lol!”

A third shared: “I think you should put animal print over the entire house- especially if he says no.”

Drew is no stranger to attempting DIY in her home – she also transformed her son’s bedroom for just £2 using Wilkinson’s tester paint.

We shared how a mum with the ‘ugliest house on the street’ revealed an amazing transformation & people think she built a new one.

And a girl, 12, completely transformed her family home for £50 in seven days & she’s a dab hand with the power drill too.