WHEN Fiona Cracknell drew a Flinstones mural for her daughter on the pavement outside her house, she hoped it would also bring a smile to her neighbour's faces.

During lockdown, the talented Australian mum has been encouraged by other members of the community to draw even more murals around the neighbourhood – including ones inspired by Futurama and Mario. 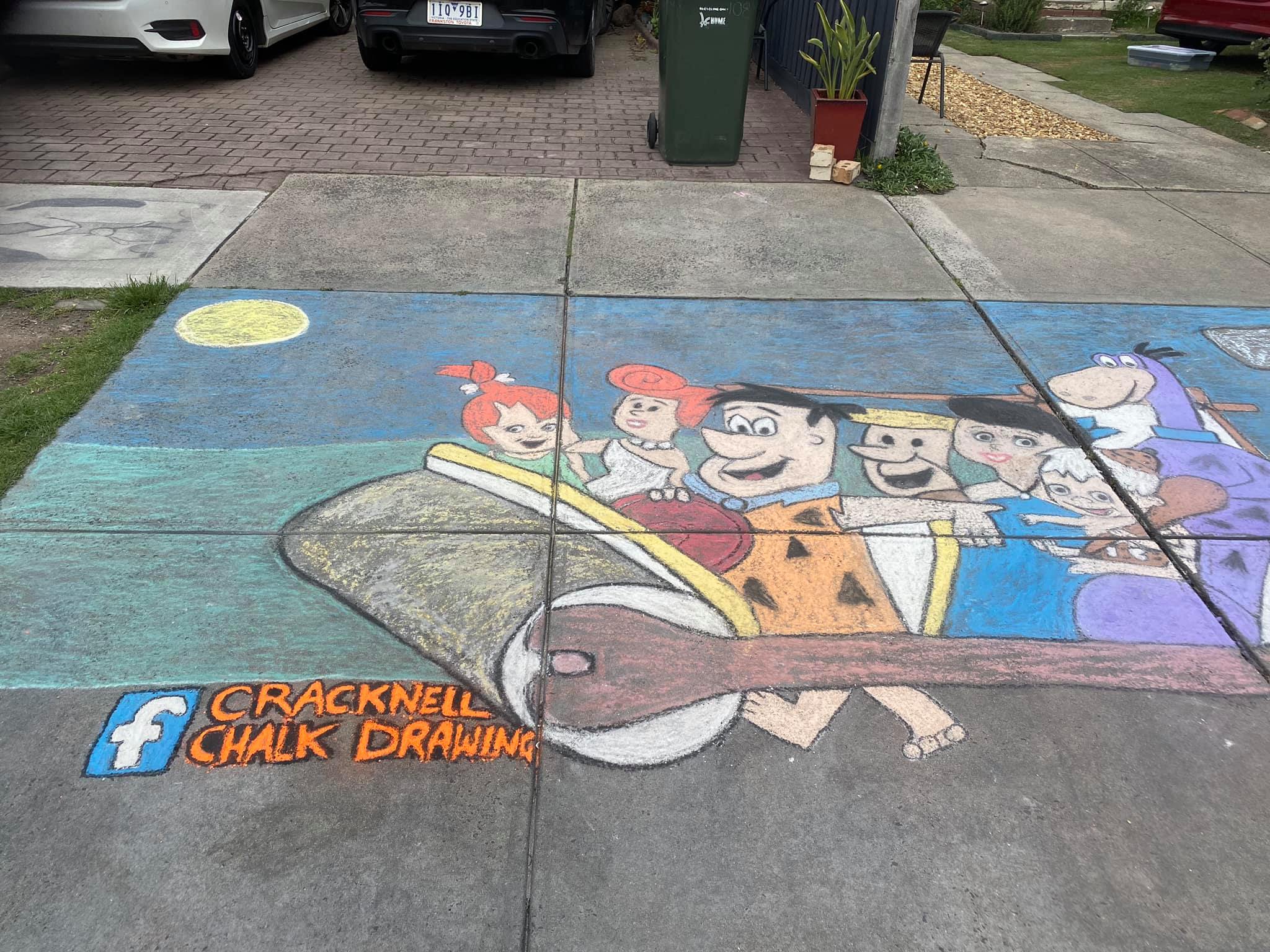 Fiona has been sharing her amazing murals on her Facebook page Cracknell Chalk Drawing and had her designs shared by people all over the world.

She wrote: "I started drawing for my beautiful 3 year old daughter, had no idea it would impact my local neighbourhood while in lockdown this much!"

But not everyone is impressed with Fiona's handiwork – and earlier this week, the mum revealed that a neighbour had reported her to the council and written a three-page letter calling her a "pretentious p****".

Sharing the foul note with her 2,200 fans, the mum said: "I cannot believe this! I am really upset and angry. All I wanted was to make people smile at a time they needed it the most. 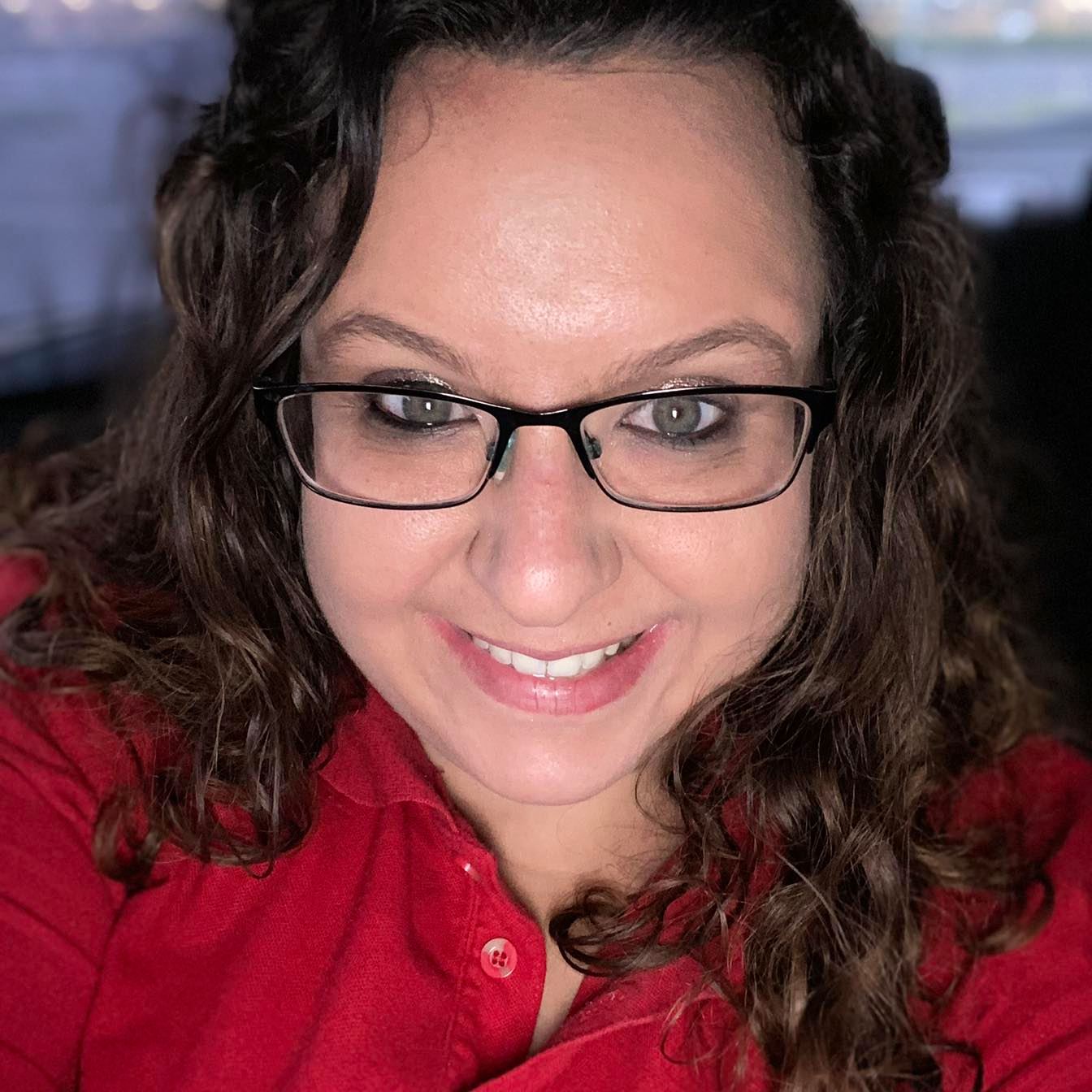 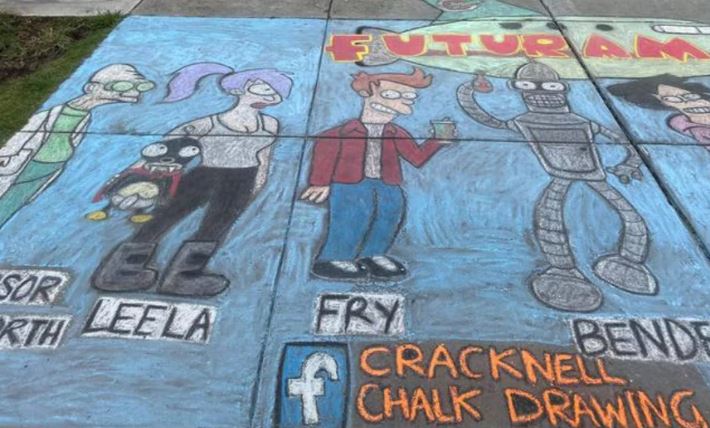 "All I wanted was to [do was] put a bit of me into the world. Spread love and positivity everyday to my friends!"

The letter was written by an anonymous neighbour and sent to Fiona and her local council.

"I’ve copied the letter to the pretentious p****s at that house in the hope they will see this letter as a warning and cease their crap," the letter reads. "They may also get it into their skulls that graffiti of council land is illegal. Placing the lives of locals at risk because of their desire to."

Over the course of three pages, the angry neighbour shares pictures of Fiona's various murals and claims the chalk makes the pavement slippery. 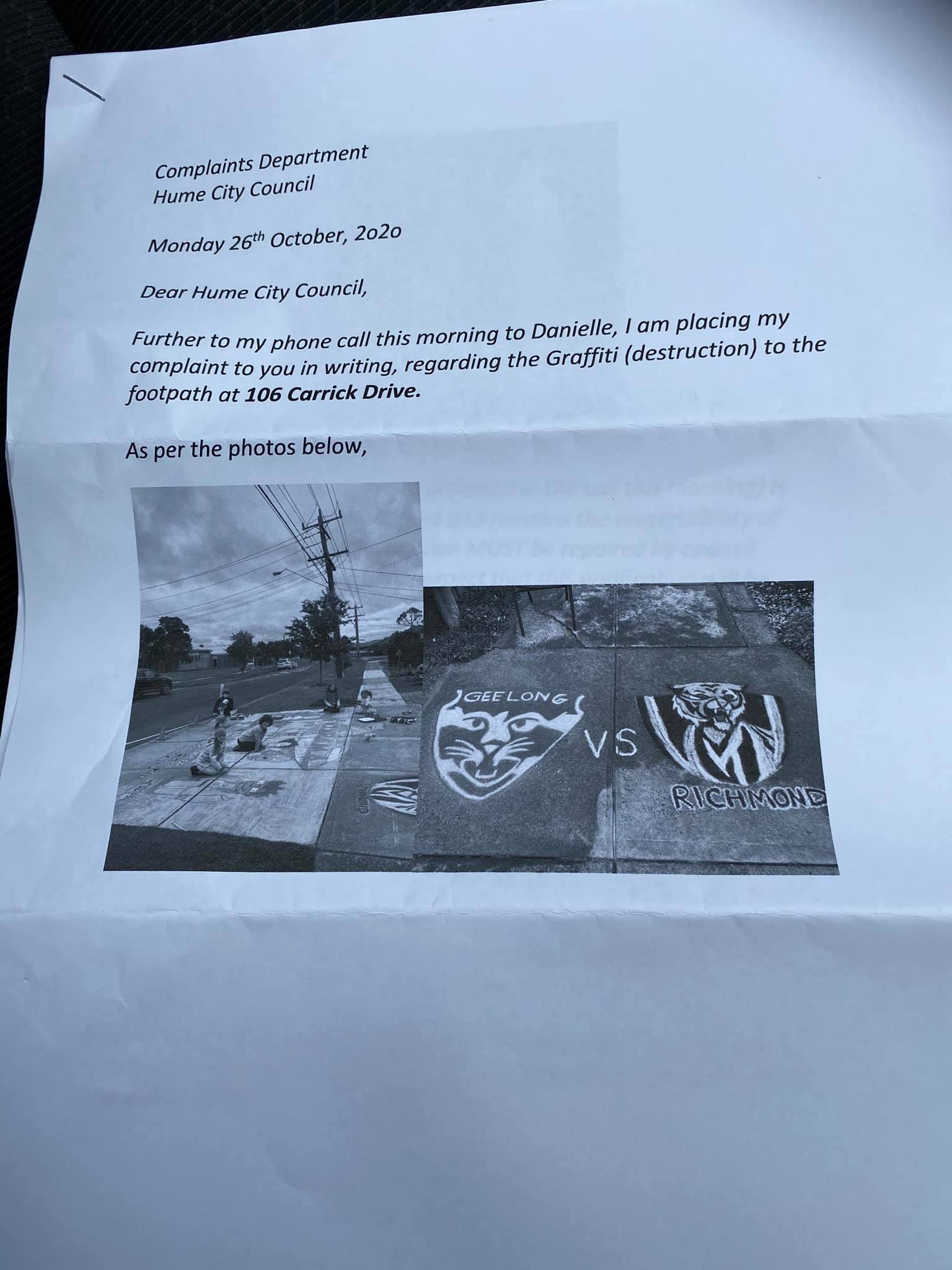 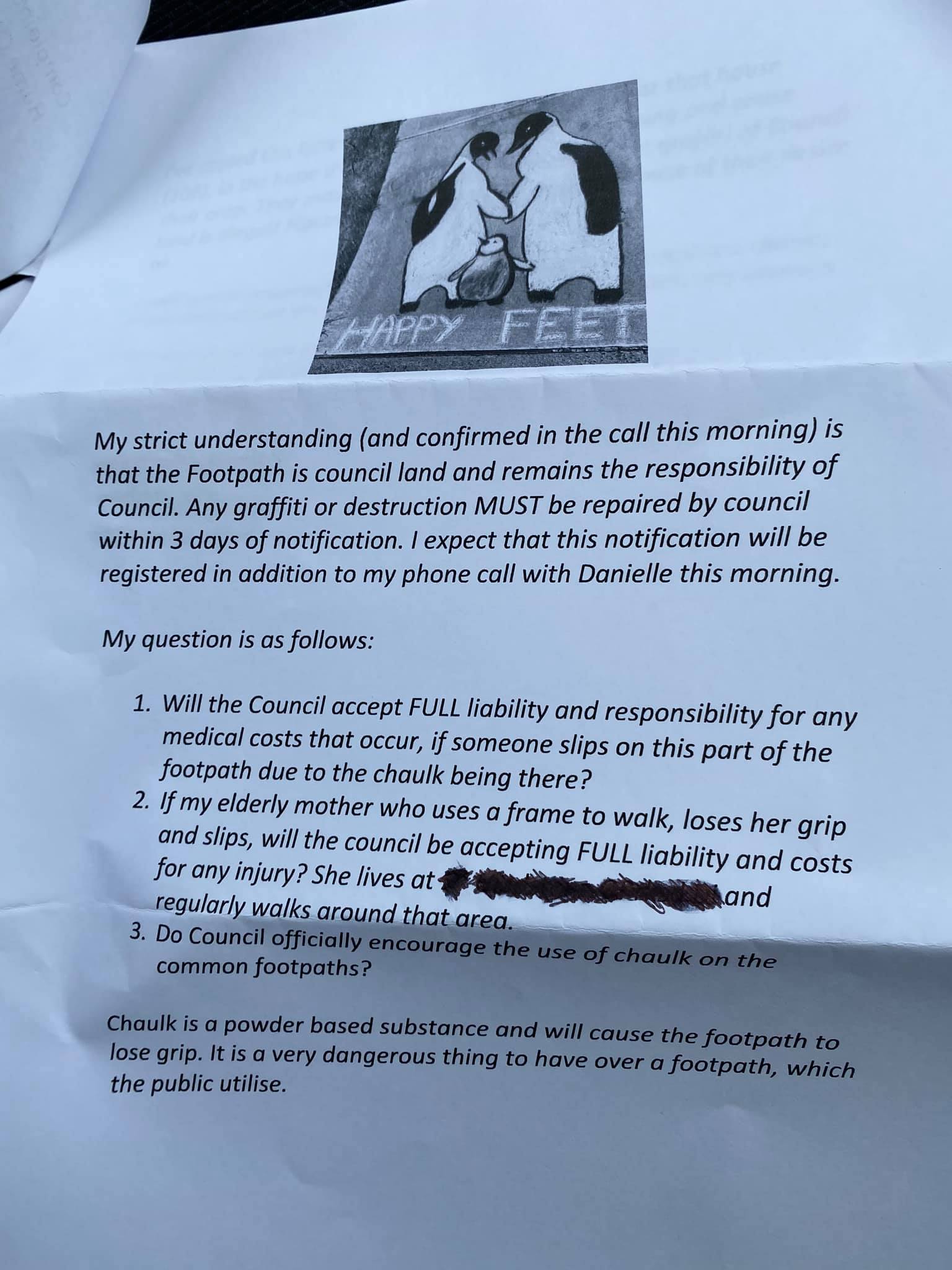 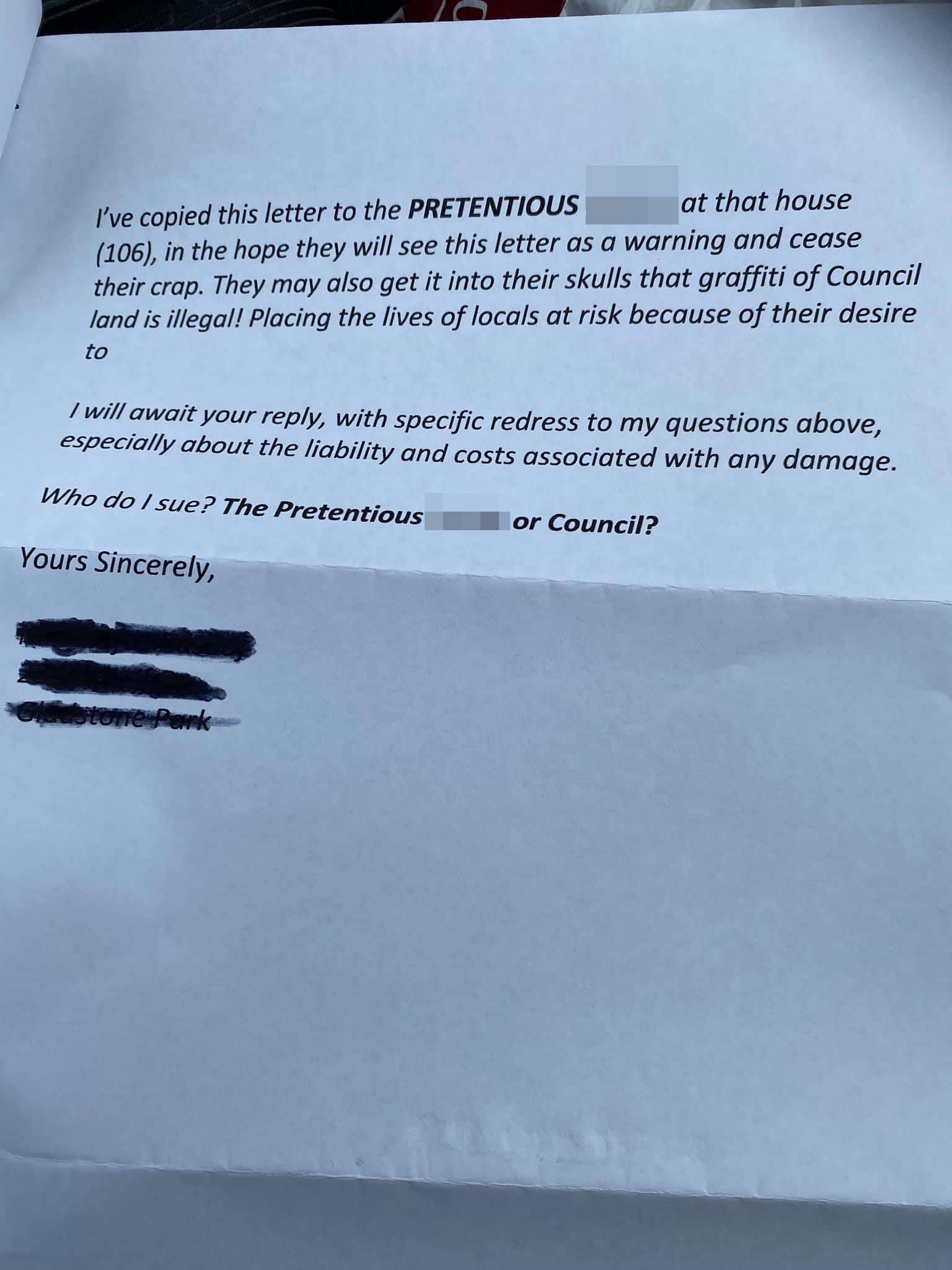 They wrote: "If my elderly mother – who uses a frame to walk – loses her grip and slips, will the council be accepting FULL liability and costs for any injury?"

Signing off the note, the anonymous neighbour asks: "Who do I sue? The pretentious p****s or the council?"

After sharing the letter on her Facebook group, Fiona received countless messages of support from her local community.

One replied: "I told my 8 year old that some mean person wrote a letter about your drawings. She was so angry at them and suggested we bring you flowers to make sure you’re ok. 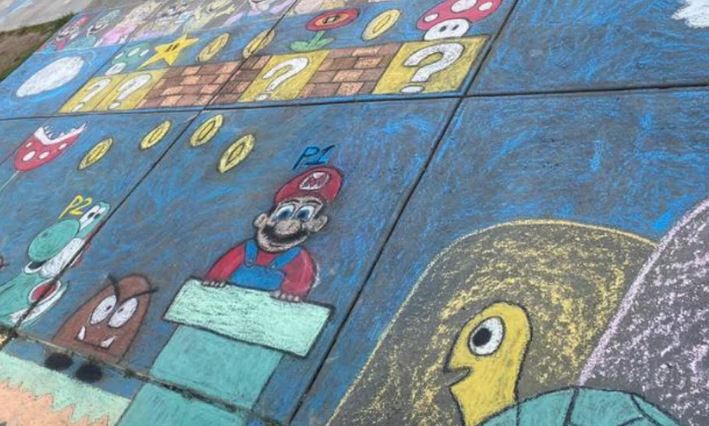 "Point is, we all love your sidewalk art, don’t worry about one miserable person, it will be a case of more about him than you."

Another added: "Just wanted to say thank you for brightening our days. Keep drawing, your work is wonderful."

A spokesperson for the council told Seven News: "Chalk messages and drawings on streets have been developed by children and adults alike during the COVID-19 pandemic, bringing hope and joy to Victorians during this difficult time.

“Council will not issue any fines for these drawings or ask for them to be removed."

For more viral stories, this bride-to-be was mercilessly trolled for her Mickey Mouse engagement ring which people have dubbed the ‘worst EVER’.

And this woman showed off her sister’s disgusting bedroom with dozens of bottles of WEE all over the floor.

Plus this 'petty’ woman took savage revenge on ‘controlling’ couple next door who complained about her fence.