WHEN Una Ring’s colleague James Steele began texting her, it was the start of a terrifying ordeal that culminated in him trying to break into her house with a crowbar, rope, duct tape and a sex toy. 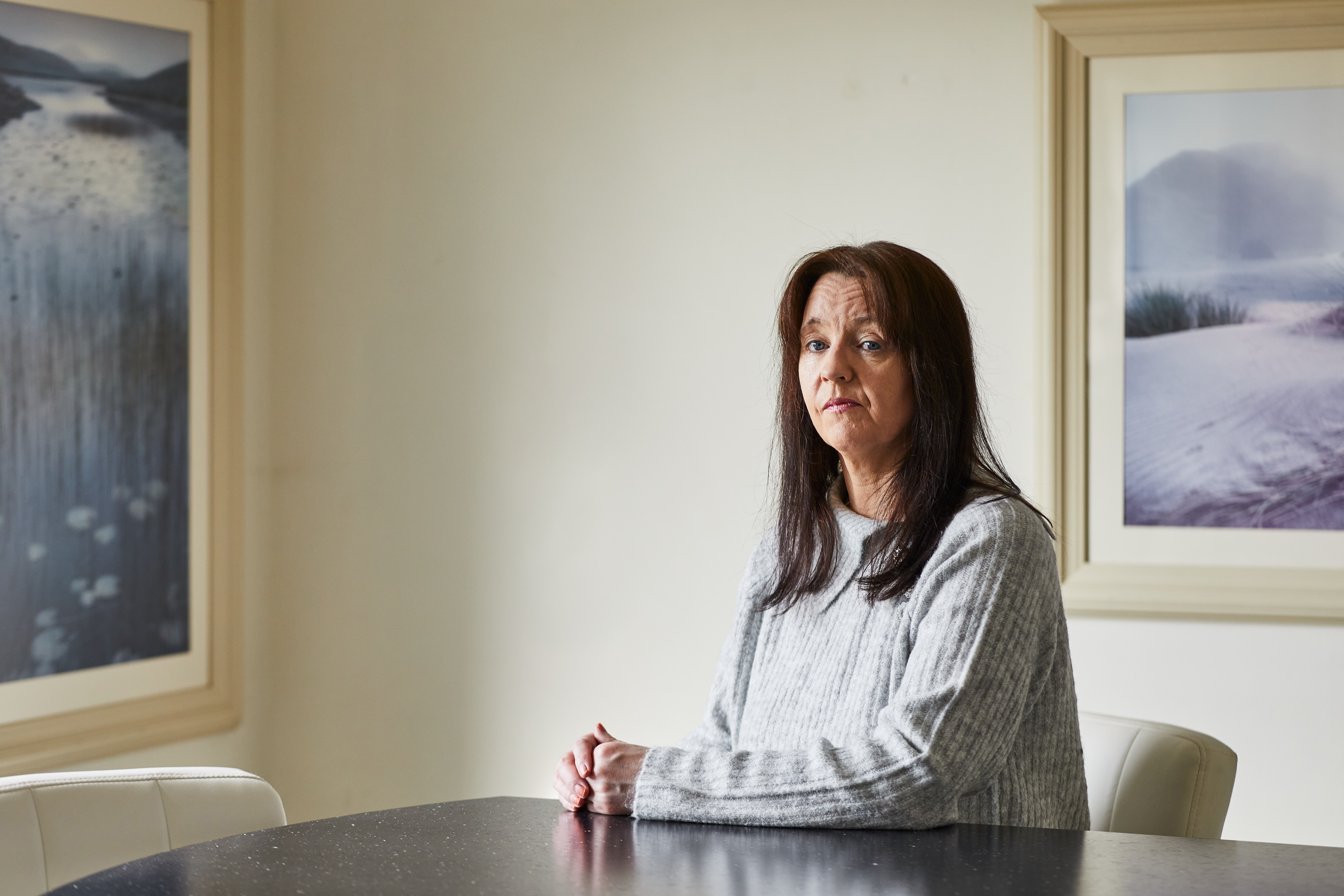 When I noticed the letter planted under a windscreen wiper on my car, my stomach plummeted.

It read: “Hello neighbour… We are going to have sex and I have listed the two options. You leave your back door open and we have sex with consent. [Or] rape. I will brake [sic] in and rape you and your daughter.”

Immediately, I bolted back inside my house, terrified that my stalker was watching me.

Before my nightmare began, I was working at a door company in my hometown of Youghal in Ireland.

I’d been separated from my ex-husband for 10 years and lived a quiet life with my daughter Rebecca, now 23, and son David, 19, focusing on my career.

I’d recently been promoted to office manager, which had been a real confidence boost.

It was at work that I met sales rep James Steele, 52, a married father of two, who was Australian but had been living in Ireland since 1996.

Though I was always polite, we had zero contact outside work and there was never any flirtation between us

We worked together for 18 months before Steele left the company in February 2020, and I didn’t think anything of it when he called me, asking some work-related questions, and assumed he’d got my number from the work WhatsApp group.

A few days later, he called again and asked me to come to his new office to give him some files he’d left behind.

Because his reasons for contacting me seemed legitimate, I didn’t feel like anything was off.

I went to meet Steele at 7am on February 14 last year. 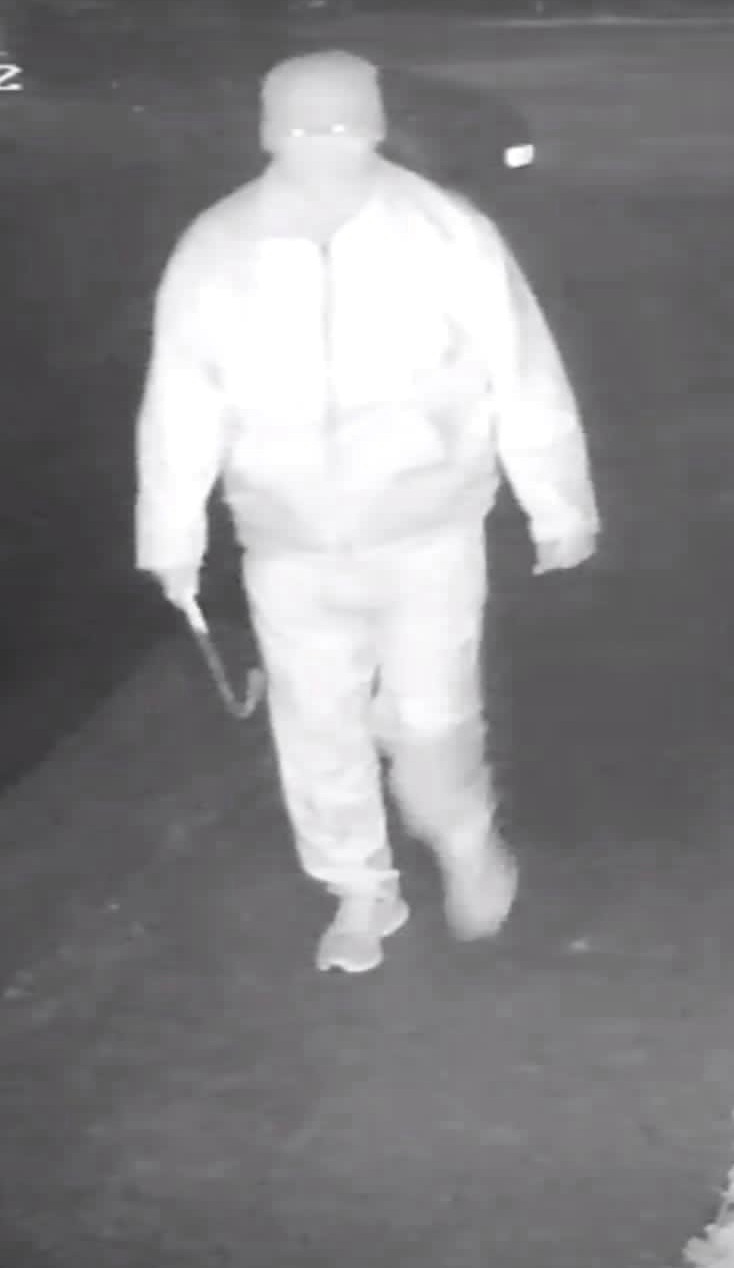 It was still pitch black outside as we entered his office, and he locked the front door behind us, though I didn’t think much of it at the time.

Then once we were upstairs in the meeting room, he launched at me, putting his arms around me and trying to kiss me.

Panicking, I told him to stop, but he wouldn’t.

He was much stronger than me, and it was a struggle to get away, but eventually I managed to shake him off, telling him firmly: “Just stop.”

Anger flashed across his face.

Knowing that I was locked in, I managed to keep my fear inside and persuaded him to sit down and have a coffee with me.

My heart was thumping, but I told him calmly that I had to leave.

He led me downstairs, unlocked the door, and as breezily as I could, I walked to my car then drove away.

Anger flashed across his face.

Afterwards, I was too shocked and bewildered to tell anyone what had happened, but I kept going over it in my head.

The next day, Steele’s name flashed up on my phone while I was at work.

It was a text apologising for what he’d done. I replied to say I accepted his apology.

I ignored it, but soon there were more, expressing anger that I hadn’t replied.

Over the next few days, he sent me 20 texts accusing me of being rude for ignoring him.

Unable to sleep with worry, I decided to go to the police.

I printed off the messages and found two attachments I hadn’t noticed before. They were pictures taken in the area where I lived.

I realised he must have driven from his home 70 miles away to take them. 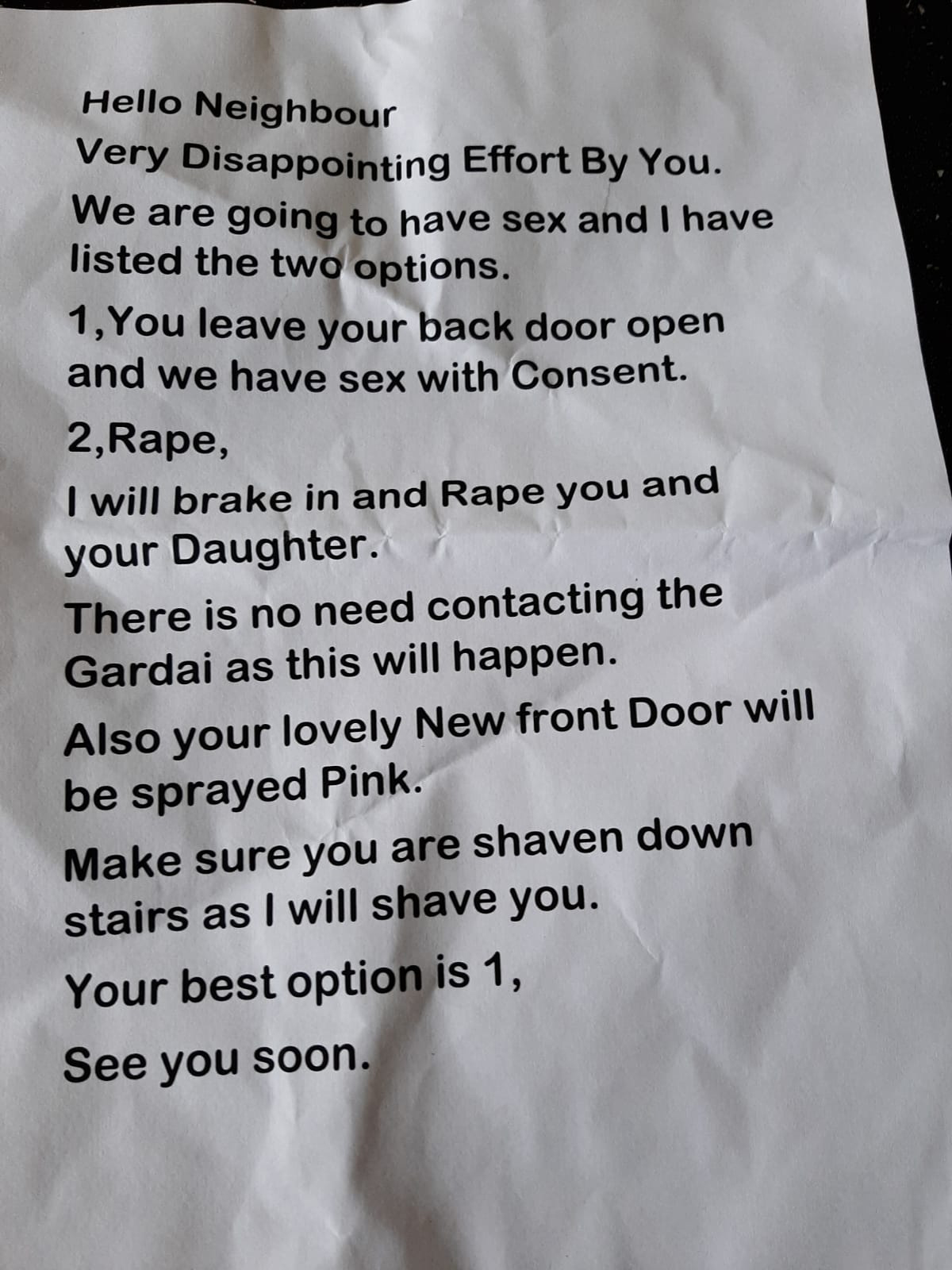 At the police station, I was relieved when officers took me seriously. They told me not to reply and that they would keep the messages as evidence in case things escalated.

He continued to send me messages – each more and more angry

Meanwhile, I was becoming increasingly stressed, especially at night when I would double-check that every door and window was locked.

Every time I heard a car door slam, I was terrified that it was Steele, but still I kept it to myself as I didn’t want to burden my children.

A week later, Steele texted, threatening to come to my house. I broke my silence, telling him not to come anywhere near me, and immediately went to the police.

They told me they could caution him, but that it might anger him further and make things worse.

Reluctantly, I asked them to leave things for now, and they told me to call if anything else happened.

The messages calmed down over the next few months, but I was still on edge, convinced that Steele might turn up at any moment. 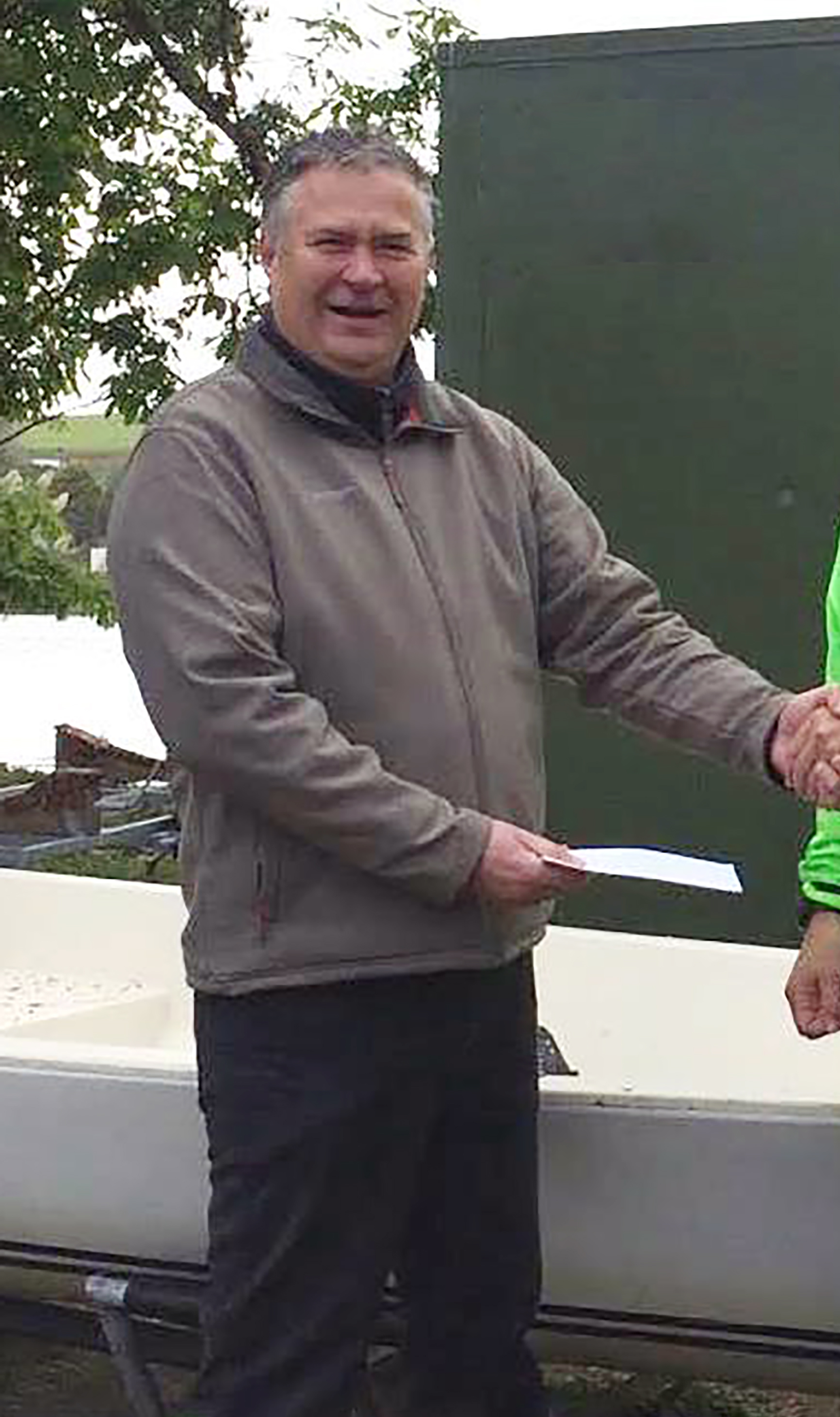 By the start of June I was feeling unwell with stress and insomnia.

My GP gave me anti-anxiety medication and recommended that I tell my family and my employers what was going on, but still, through a feeling of shame, I kept my struggles to myself.

On July 7, I was leaving my house to go to work, when I noticed that my car tyres had been spray-painted bright pink.

Immediately I knew it was Steele.

The country was in lockdown and my estate  was eerily quiet, which made the whole thing even more sinister.

I called the police, but without any CCTV evidence there was little they could do.

My heart was thumping, but I told him calmly that I had to leave.

It was the most unnerving feeling, knowing that he had been near my house while I slept.

Six days later, I woke to find the windows of my house had been sprayed with Xs and Os, and “I win” had been daubed on the windowsill.

I called the police immediately, and this time I could tell that they were concerned, which put me further on edge.

They took photos and a statement, but as there was no evidence that it was Steele who was responsible, they couldn’t arrest him.

Instead, they told me that they would apply to get CCTV installed on my property, but the paperwork would take several weeks.

The next morning, on July 14, I found a letter under the windscreen wiper of my car, which was parked outside my house. 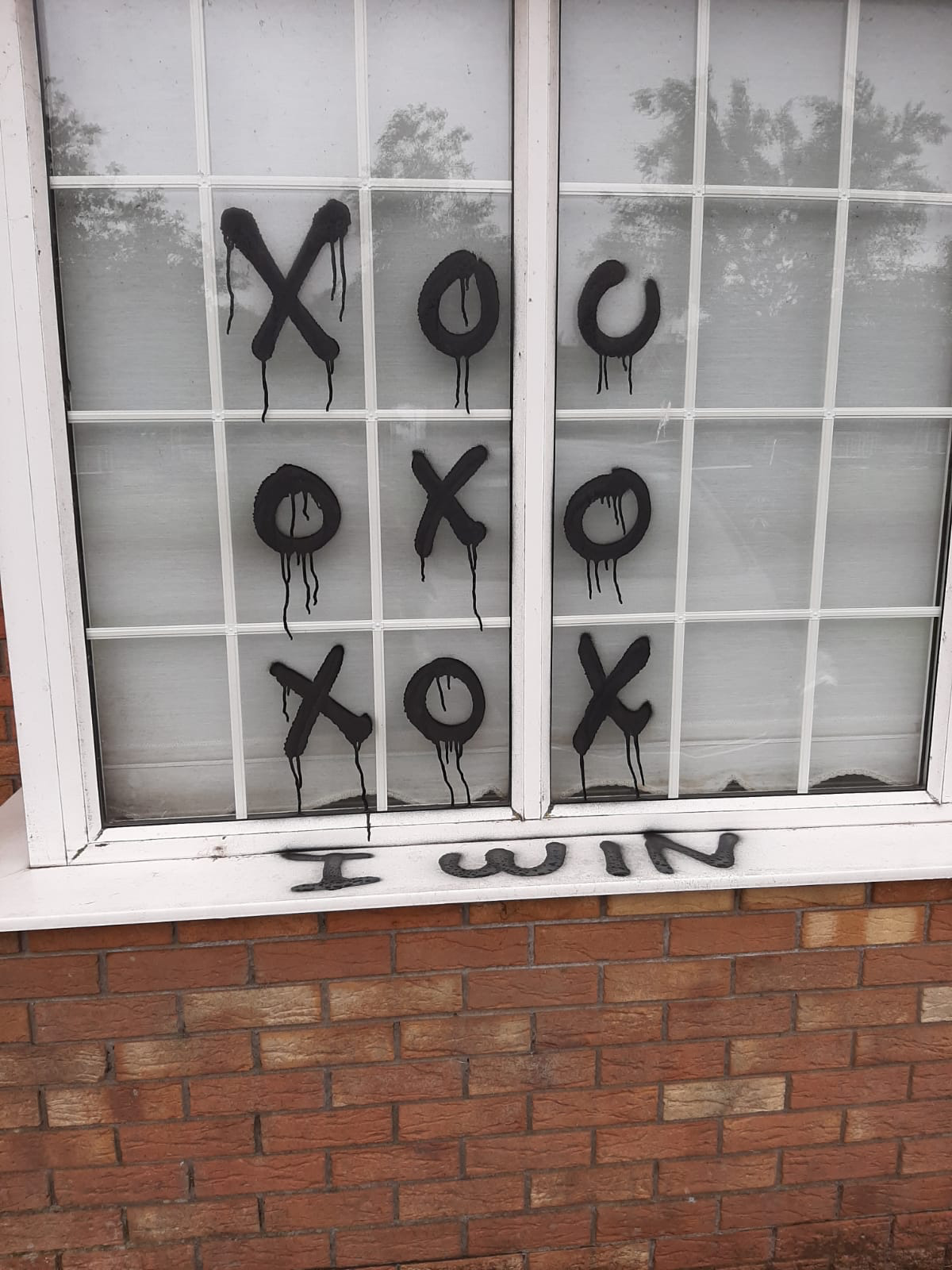 I ran back inside, where David and Rebecca saw how shaken up I was.

Opening the letter in front of them, I saw that it contained two condoms and a note that began: “Hello, neighbour” and then went into graphic detail about what he wanted to do to me sexually.

I collapsed in tears as I explained to the kids what had been going on.

David was furious, as well as anxious for me and his sister, and I couldn’t bear the look of worry on Rebecca’s face.

I called the police, who sealed up my letterbox and checked the locks.

They told me they would patrol outside my house to try to catch Steele out.

I wasn’t prepared to wait for them to install CCTV, so I asked a friend to put some in that evening.

It was some comfort that David was at home, but I was worried about Rebecca leaving the house and was too scared to go out myself, except to work

By now, I’d told my company, and they were shocked but very supportive.

The next morning we discovered the letter threatening to rape me and Rebecca.

I contacted the police, who viewed my CCTV and confirmed that Steele had been caught on camera at 3.15am leaving the note.

The thought that he was actually going to try to carry out his vile threats was sickening.

They decided to wait in unmarked cars to see if he came back the following night so they could arrest him, as he was wearing his hood up and a face mask in the CCTV video, and they were worried a jury might not be 100% sure that it was him.

I slept better knowing that the police were outside, but I was still terrified.

That first night, Steele didn’t turn up, but sure enough, four nights later at 3.45am, in dark and stormy weather, I was woken up by the sound of Steele being apprehended outside.

Running to the window, I saw him being handcuffed and taken into the van.

The police told me he’d been carrying a crowbar, rope, duct tape, lock-picking device and a sex toy.

I was absolutely horrified.

The thought that he was actually going to try to carry out his vile threats was sickening.

The next day, Steele was denied bail and a hearing date was set for that October.

Though I felt relief when he was arrested, my anxiety spiralled out of control.

By September, I felt like I was falling apart, so my GP upped my medication and I began seeing a counsellor.

Although he is in prison, the trauma stays with me.

I was diagnosed with PTSD and was signed off work.

I was suffering with nightmares and became obsessed with checking that the doors were locked.

When I was out, I would walk with my keys in my hand, and whenever I got into my car, I would checked the back seat to make sure there was nobody there.

Steele pleaded guilty to intent to burgle and commit rape, as well as criminal damage to my house and car, and harassment.

Despite this, I still came face-to-face with him during hearings and it was gruelling seeing my tormentor, though he looked sheepish and avoided eye contact with me.

He eventually received a sentence of five years in prison, which I don’t think is long enough.

I learned that he has a previous conviction for indecent assault in Australia – it was no surprise that I wasn’t his first victim and that he has a history of harassing women.

I have nothing but pity for him now, and I feel sorry for his wife and kids.

I just don’t understand how he could bring Rebecca into it when he has a daughter himself.

I slept better knowing that the police were outside, but I was still terrified.

Although he is in prison, the trauma stays with me.

Rebecca and David are both young and resilient, and they have coped well, but I’m still having therapy for PTSD.

I’m back at work but only part-time, and it frustrates me that I worked so hard on my career, only to have him take it away from me.

I’ve been single for 10 years and I can’t imagine trusting a man ever again.

I was happier when the 2m rule was in place, because I can’t handle anyone standing too close to me – it makes my skin crawl.

Despite this, I refuse to live half a life and I’m focusing on rebuilding my future. 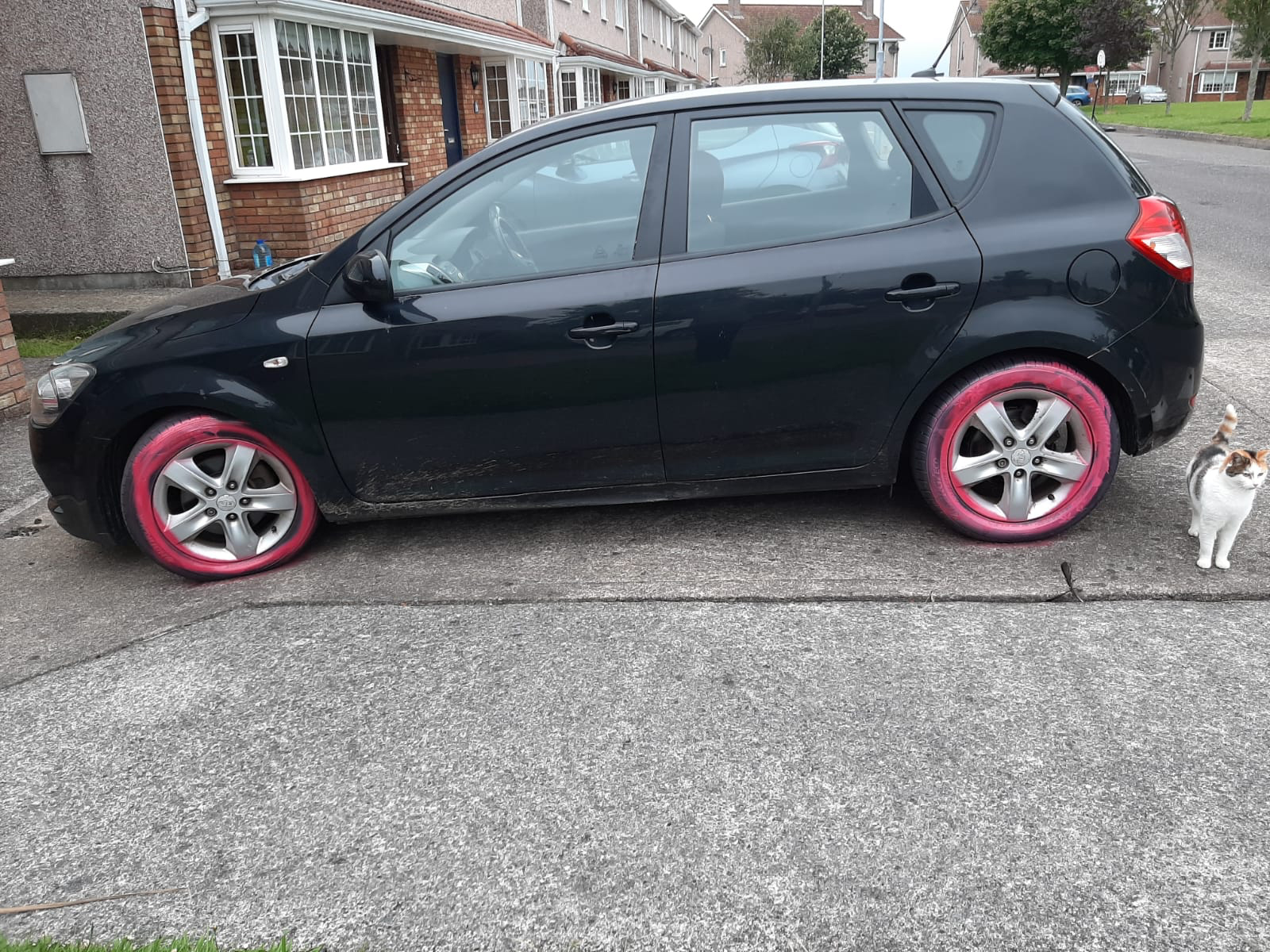 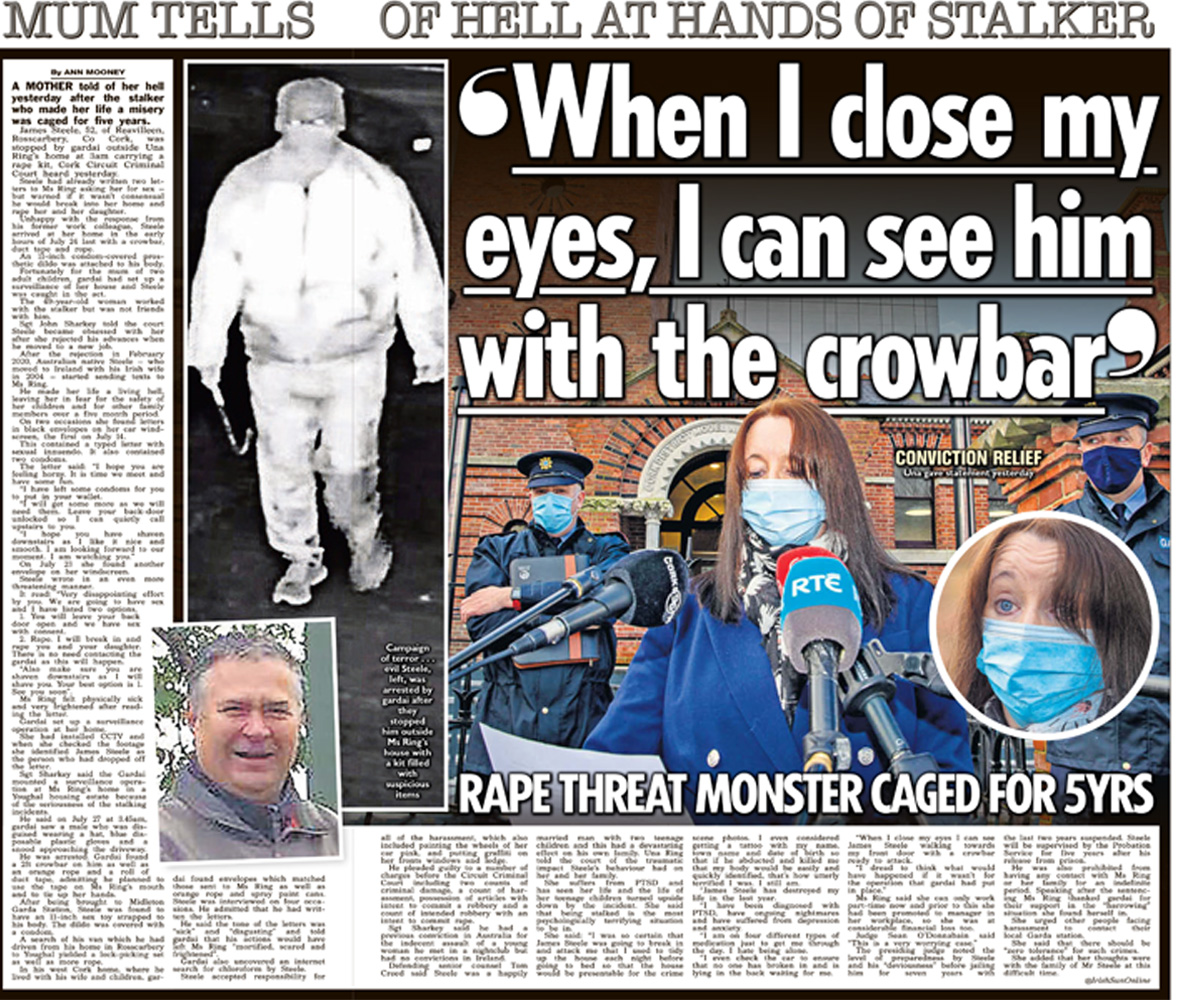 I’m campaigning for the Irish government to make stalking an official crime like it is in the UK – plus a penalty to deter people from doing it.

Women with similar stories have contacted me and it’s appalling just how many of them have been through something similar.

Stalking is such a prevalent issue, and I won’t stop until the law has been changed so that no one else has to go through what I did.