Now’s the Time for Wigs. If You Can Get the Hair for Them. Supply-chain problems have interrupted Black women’s efforts to stockpile during the pandemic. 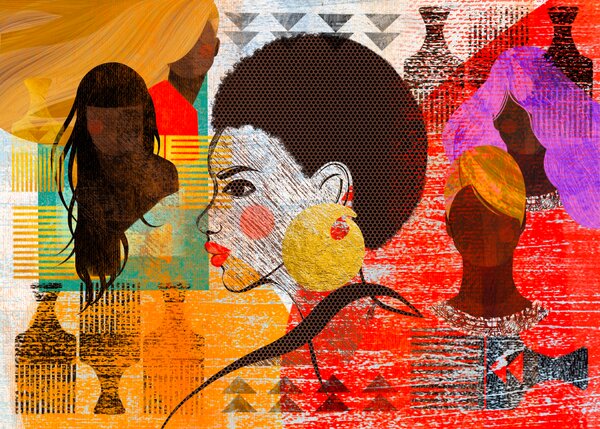 When Mia Birdsong was around 8 or 9, she’d prance around in cowboy boots and a spiky Tina Turner-style wig.

As a tween, she coveted fake manes in a wig store for their sleekness and eminent manageability, compared with the vigorous multitexture hair she’d inherited from her Black father and white mother.

“You know the story: Black kid with white mom who doesn’t know how to do her hair,” said Ms. Birdsong, an author in Oakland, Calif. “I would have these big bangs I’d do with a curling brush. Basically, the front and sides would be straight. And the back wouldn’t.”

Wigs give the illusion of all-over-the-head uniformity, she thought. “It was all about, like, long flowing hair, too,” she said. “I was super into wigs that gave me white women’s straight hair.”

Those childhood yearnings aside, it wasn’t until this July — almost four decades later — that Ms. Birdsong, 47, bought her first wig that wasn’t for a special occasion or play.

Actually, she bought six, all with generous and sleek bangs. Among them was a Twiggy-esque short number in orange Creamsicle colors; another with electric blue waves; and three basic black wigs with names like “Mariella” or “Flirt.” They arrived with another delivery: a machete. With her wigs, a giant knife and a stocked pantry, she declared herself ready for intransigent shrubby weeds in the “the garden, honoring my Jamaican roots, and the apocalypse,” she said.

Ms. Birdsong has been unable to see her hairdresser since March because of the pandemic, and she wanted to look presentable during frequent Zoom meetings. During them, she’d been absent-mindedly trimming her curly hair, and soon cut beyond the forgiving length of even the shortest ponytail.

She’s one of many women in the United States, particularly Black women, who have changed their hair routines and stocked up on multiple wigs. They fear future salon closures in states where cases are surging, warnings about hair salons potentially being high-risk transmission sites, and sometimes glacially slow delivery and spotty supplies from online retailers.

Holly Stepp, who works for a biomedical company and lives in Raleigh, N.C., found herself in the club of wig novitiates. Ms. Stepp, 46, knows how to make a “relaxer” last. She typically gets her chin-length bob chemically straightened every four months, stretching well past the conventional salon wisdom that she should get a “retouch” to smooth new growth every six to eight weeks.

Ms. Stepp, 46, has worn her hair natural only briefly during college. She didn’t want to take her chances if the pandemic lingered and she couldn’t get a fresh perm. Unable to see her hairdresser during a monthlong shelter-in-place order that started in March, she went online and, for the first time in her life, shopped for wigs.

At the six-week mark when many people with relaxed hair would be headed back to the salon, she felt the siren call of Instagram marketing. “You see all these ads for wigs, the hair companies, and the influencers showing themselves unboxing their wigs and how quickly they can put them on,” she said. “I thought, You know what? That could be a thing to do.”

Ms. Stepp bought about $600 worth of midpriced wigs — five conservative lace-front bobs that “looked reasonably like my own hair” — and all the accouterments: tweezers, scissors, glue, canvas stands and tripods to prop them up. She promptly discovered that, despite her ideas of plop-and-go, the wig installation learning curve is steep. After numerous YouTube tutorials and efforts to get the hairline right, she gave the wigs to her 27-year-old niece, who Ms. Stepp said “will wear a platinum blond” to work.

Ms. Stepp hasn’t felt comfortable changing her hair drastically or obviously in professional settings, and she long held some notions about wigs being “something not done” in her middle-class family and community. Even so, she occasionally fantasizes about ordering a $3,000 hand-knotted made-to-order wig from a salon in Washington, D.C. In June, she cut her hair short and is going “semi-natural.”

Ida Harris, a writer and graduate student in Oxford, Miss., was similarly unpleasantly surprised by the work of putting on a wig. A hair chameleon, she often rocks long, flowing middle-part extensions that recall Mona Lisa or Solange Knowles. Sometimes she’ll a choose big, bohemian, bouncing Afro, though she thinks the time she went bald “was my best look.”

A lover of extravagant extensions that obviously aren’t issued by her own scalp, Ms. Harris, who is in her forties, thought that wigs would be much the same as weaves and ordered two.

But “it’s cumbersome, you got to lay it out, spray it down, melt it,” she said. “It has a whole new language. I don’t want to do no hair.”

Ms. Harris opted for buying hair and getting a beautician to make it into a two “forever wigs,” right for her face and head measurements. Even so, she hit several snags. When her wigs arrived, one was just too full.

“The world knows I don’t have this lion’s mane,” Ms. Harris said.

There was another problem: Her globally sourced human hair was on back order. The hair originated in China, was shipped to her contact in Atlanta, then to New York where it would be fashioned into wigs.

Even as many Black women are transitioning to wigs or buying multiples, those wigs aren’t as easily obtained as they were just months ago. Chantell Carrtherol is a Los Angeles stylist and wig maker who learned how to make hairpieces on Broadway and also helps clients customize wigs she designed.

Her premium handmade wigs can sell for up to $6,000. Since July, she said, sales at Her’s by Chantell have plummeted 75 percent. Economically uncertain buyers have delayed purchases of luxury wigs, which are painstakingly sewn and personalized, but she finds it challenging to source the hair she needs to fulfill new orders.

Ms. Carrtherol, 39, had trouble getting the lace for the cooler, lighter lace-front wigs that are popular. South Korea is a major player in lace manufacturing, and its production was delayed when coronavirus raged through the country earlier this year. Switzerland sold out of lace for a time.

Lace closures — typically, a horseshoe-shaped piece onto which the hair is sewn — have been hard to find. Prices have spiked accordingly; a square foot of sturdy lace can now top $120 a square foot, up about 20 percent. Hair shipments from the two vendors in Asia that Ms. Carrtherol uses slowed to a business-killing trickle.

“With one company, I put in an order in July and I’m still waiting,” she said. “It’s been really challenging to get any concrete answers or real information from the suppliers. If you can’t promise a client, what do you have?”

Arthur Ramlal, a consultant for the China International Hair Fair from the Netherlands, said that geopolitics, trade disputes and the pandemic have created a uniquely frustrating situation for hair vendors and buyers, be they corporations, small business owners or consumers.

“India had a very strict lockdown, and something like 80 percent of the hair for wigs and extensions come from India, mostly from the temples” where people donate hair, Mr. Ramlal said. Furthermore, he said, the political relationship between China and India “is not so good at this moment, with boycotts” and threats of impending trade wars.

Less hair is being donated and some workers have been afraid to process hair or go to work, rupturing the supply chain. The international hair fair that Mr. Ramlal represents was canceled in late August; annually, the expo attracts up to 30,000 visitors, with separate conference halls for Chinese and English speakers.

And that may have a disproportionate effect on the U.S. market and its Black buyers. Mr. Ramlal estimated that Black American hair buyers like Ms. Carrtherol (who previously spent a year traveling to find vendors in China and India) make up the overwhelming majority, perhaps as much as 90 percent, of the foreign visitors who come to the Guangzhou hair show.

And then there are stateside delays. In July, U.S. customs officials seized a hair shipment from China — one of the biggest “sending countries,” along with India, Brazil and Malaysia. U.S. Customs and Border Control believes that the hair came from forced labor camps largely holding ethnic Uighurs, a Muslim-minority group from western China.

News like that is a worry to a wig and extensions industry that’s a massive, continent-spanning business. In the United States alone, wigs and hairpiece stores net $391 million annually, according to Ibis World Analysts. And Black Americans are among their most faithful customers. A 2017 Nielsen Homescan report noted that Black consumers spent $473 million on hair care that year and another $54 million on “ethnic hair and beauty aids.”

Antionette Kerr, a writer and nonprofit media consultant from Lake Norman, N.C., is watching for any hints that her wig pipeline is further endangered. U.S. mail delays, order restrictions and travel prohibitions earlier this spring cramped her style. She keeps a mini-stockpile, usually ordering two at a time. She wears wigs to cover her hair loss from alopecia and because her grandmother had a predilection for glistening silver bobs one day and Diana Ross hair halos the next.

In the summer, when she’s outdoors and swimming frequently, Ms. Kerr, 41, runs through a wig a week. She giggled at the memory of a vacation at an all-inclusive resort in the Dominican Republic. When she dolphin-dived in the pool, her wig went one way, floating on the surface like a hirsute water lily. She went the other.

“My boyfriend at the time said, ‘I don’t know whether to save you or your hair.’ I was, like, save the hair. I got me.”

On March 28, she ordered her favorite wig online. The model — an Isis “Brown Sugar” human hair blend that often costs less than $40 — arrived a full two months later, on May 30. She searched around the web, but it was consistently sold out, except in colors she balked at wearing on her frequent online trainings.

“I went to HairSisters.com,” Ms. Kerr said. “The selection was slim. They only had purple left. And I love purple hair.”

But it “just wasn’t what I wanted to wear during webinars” she was facilitating, she said.

“For a couple of weeks in the beginning, Amazon was only delivering ‘essential’ items,” Ms. Kerr said. “And it was freaking me out. Because don’t they know my hair is essential? Though I did get toilet paper then — for $30. Ridiculous, ridiculous.”