It takes some gumption for a designer to announce, just days before the opening of the Metropolitan Museum’s costume extravaganza celebrating the ubiquity of “camp,” that “reality is what interested her. Because everything now is too much: too complicated, too sophisticated.”

Too angry, Miuccia Prada could have added. Too gilded. Too full of distortion.

“Simplicity is a kind of protest,” she said.

But then, Ms. Prada has never been afraid of a little dissonance, aesthetic or conceptual. Bringing her cruise collection to New York for the second year in a row, she proved it.

Anti-fur protesters set the tone outside the old piano factory on the Far West Side of Midtown Manhattan that serves as Prada headquarters in the city, toting signs that read “Animals are not ours to wear” and “Shame on Prada.” 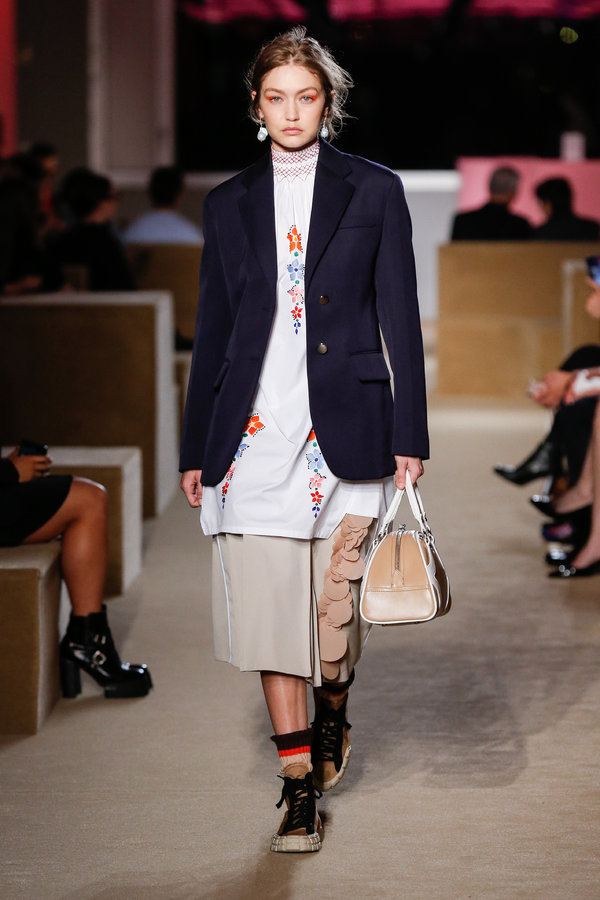 Prada is one of the few brands that has not joined the current trend toward renouncing exotic skins and fancy pelts, though in point of fact there was only what looked like a single sheepskin coat on the runway. And none of the guests, who included Naomi Watts, Lee Daniels, Uma Thurman and a bunch of the “Stranger Things” kids, were wearing fur. So guests could be forgiven for wondering what, exactly, the picketers were protesting: a general sense of wrongdoing, perhaps. The inchoate yelling did kind of underscore Mrs. Prada’s point.

“In moments of difficulty,” she said after the show, “the only way to survive is being yourself.”

So that’s why she held the collection in her “home,” with its views over the Hudson River, and that’s what she expressed in her clothes. Going back to the awkward elegance that originally defined her approach to dress, she layered neatly tailored double-breasted coats and long blazers over high-necked cotton tunics, often sprinkled with naïve pastel flowers, and themselves worn long and loose atop A-line pleated skirts.

Banker stripes — in shirts, yes, but also shorts and dresses — mixed it up with frumpy plaids and checks in ’70s shades, as well as scattershot florals. There were boudoir granny rose-print trouser suits, the pants cropped at the ankle, the jackets with safari waists or with a painter’s smock line. The silhouette was, generally, loose and long (save for the occasional pair of shorts).

Everything was paired with thick ribbed socks scrunched at the ankle and high-top Prada sneakers or wedges. Often, there was a skinny ribbed scarf covered in paillettes tossed around the neck. Sometimes a beanie. The most ubiquitous fabric was cotton. The air was youthful, without insisting on being young. It didn’t try too hard.

“Meh,” said this show and these clothes. There is enough to think about in the world at the moment without freaking out over what you wear. Who needs slogans, when you have dad closet shirting?

“Intellectually, I am very worried,” Ms. Prada said as her celebrity invitees came over to pay their respects. (“Who is that one?” she asked after one newly minted star had been presented; everyone around her shrugged.) “Sometimes, as a designer, you feel you always have to impress and to please. But I think you need to do what is right for the moment.”

This — the offhand provocation of dowdiness, the refusal to perform for the eye of the beholder — was her gauntlet, and she threw it down with aplomb.

Vanessa Friedman is The Times’s fashion director and chief fashion critic. She was previously the fashion editor of the Financial Times. @VVFriedman