WHILE certainly not encouraged, many of us have woken up from a night out with friends with a gaping hole in the memory bank as a result of too much alcohol.

But you probably don't expect to wake up in a bouncer's spare bedroom with a note left by the stranger who came to your rescue, as this pubgoer experienced. 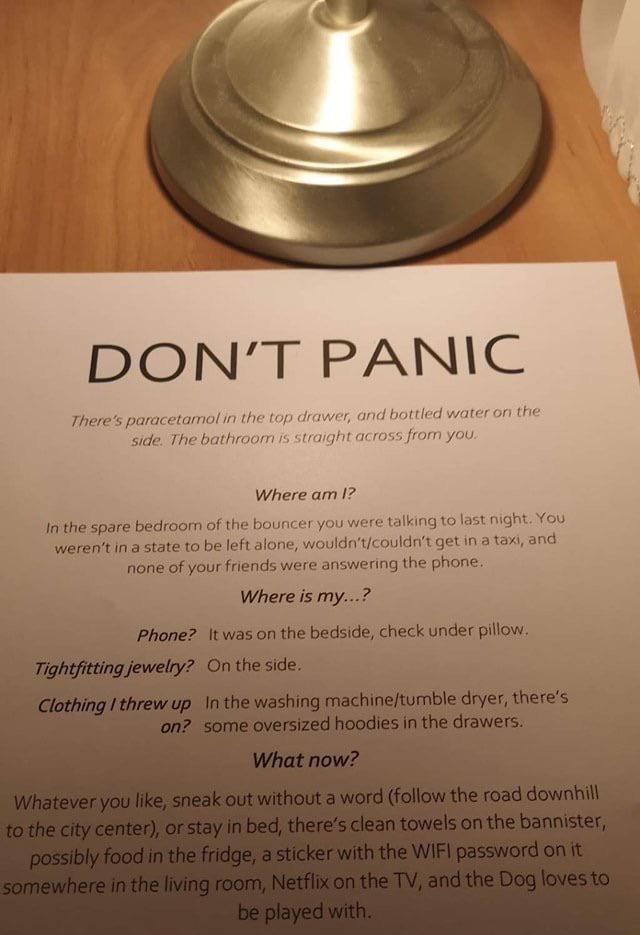 The 'wholesome' note was shared on Reddit with many finding the gesture rather funny, although some dubbed it'creepy' instead.

You see, the pubgoer appeared too drunk to go home so the bouncer took it upon themselves to offer a helping hand.

"DON’T PANIC" it began before going on to explain how exactly the person wound up where they were.

“You’re in the spare room of the bouncer you were talking to last night,” the note read.

“You weren’t in a state to be left alone, wouldn’t/couldn’t get in a taxi, and none of your friends were answering the phone.”

The note then detailed where the pubgoer could find their seemingly missing belongings – including their phone and jewellery – and some very helpful information about what to do next.

The anonymous poster thought the bouncer was "wholesome" having gone through the effort to look after the intoxicated person, although this opinion wasn't a shared one.

“This is terrifyingly creepy. I would immediately call the police and check for injuries. No way this is not premeditated,” one person wrote, according to 7 News.

Another agreed: "This is borderline weird. Take me to a hospital if you’re concerned, not to your house and don’t take off my clothes to wash them."

Also calling it "creepy" a third wrote: "This bouncer, a stranger, took another drunk (vulnerable) stranger to their home, undressed them and put them to bed and then is happy to let them stay and use their home like a hotel? Bonkers!”

With someone else adding: "Im glad I’m not the only one freaked out by this note… it’s not cute. Hes picked up a belligerent drunk with sick all over. Removed her clothes (okay, I can understand why). Remove her jewellery (weird). Then had time to type this out? It along looks like he hit print and does this a lot. I’d be worried"

Plus this woman fumes when boyfriend offers to pick her up from a night out – then demands she pays him a £20 ‘Uber fee’.

Elsewhere, this woman who is 26 fell in love with the bouncer, 55, who kicked her out of a nightclub – people say it’s ‘inappropriate’.