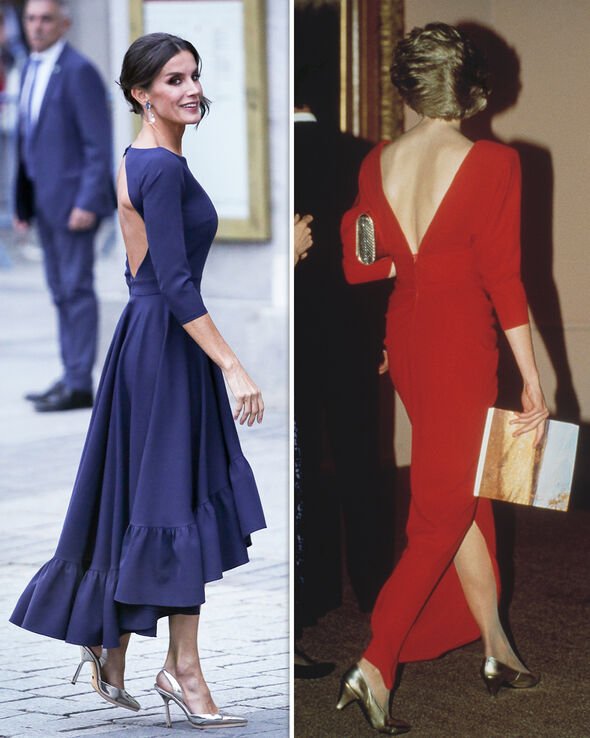 Queen Letizia of Spain is arguably one of the most fashionable royals and she is bold with her choices, favouring bright colours, modern silhouettes and cut-out details. Earlier this month, the Spanish monarch stepped out wearing a navy dress with a large cut-out back – an area not many royals choose to display. But, perhaps Queen Letizia took inspiration from Princess Diana, who was a firm favourite in showcasing her back when wearing gorgeous ballgowns for events.

The King and Queen of Spain presided over the premiere of the opera Aída by Giuseppe Verdi in Madrid earlier this week.

The Majesties watched the performance from the Royal Box and the couple then met with directors and artists of the opera after.

For the occasion, the Queen stepped out in a new dress by designer Miphai.

The exact dress is the Paris dress in navy and is made of crepe material with a three-quarter sleeve and drop hemline with added ruffles.

The large skirt has two tiers of ruffles and an open back with a “spectacular neckline”.

Princess Diana, on the other hand, frequented cut-out or open-back dresses.

In March 1985, the Princess of Wales attended designer Bruce Oldfield’s London fashion soiree in aid of Barnardo’s wearing a gorgeous silver dress with an open back.

The dress was designed by Bruce himself and after learning Joan Collins, Shirley Bassey and Charlotte Rampling were going to be at the party, Diana reportedly set the designer a strict brief: “Bruce, just make me glamorous!” And he did just that as Vogue said Diana “looking like an old-time Hollywood star in silver pleated lamé”.

The dress featured long sleeves and padded shoulders, with a large plunging v-neckline.

The material gathered at the waist with a rouche in the middle before falling into an A-line skirt.

The back however was where all the detail was, as it featured a large triangle cut out, and a train that fell from Diana’s waist to the floor to add extra volume.

This was not the only time Diana wore this dress, she chose it when visiting Melbourne in November of that same year.

From this moment, Diana went on to wear more of Bruce Oldfield’s designs, and according to Vogue, he was credited with creating the duchess’s glamorous “Dynasty Di” persona.

Before that, she was known as a young ingenue that was new to the family and trying to keep up with the royals. After their collaborations, she was a star all her own.

In December of that year, the Princess chose a plum crushed velvet gown with a low v-back for the film premiere of Back to the Future in London.

It has a high neck and long sleeves and the skirt was ruched over the bottom into a large satin bow.

To accessorise, the royal opted for a pair of long pearls which she had knotted and worn down her back.

A few years later, when Princess Diana was back in Melbourne and attending a state reception, she chose a bold red dress with a large open v-back.

The dress featured three-quarter sleeves and again, large shoulder pads. It has a wide neckline which was twisted across the collarbones and created a keyhole.

The waistband was thick and featured ruching down the middle, and there was a slit in the hemline from ankle to knee on one side.

Another time Princess Diana wore a cut-out back dress was when she attended the premiere of the film Back to the Future Part III in London, in July 1990.

She wore a white evening gown by Catherine Walker and it was created in two parts; on top was a long-sleeve structured jacket with a Queen Anne neckline, that was covered in pearls and had mirroring cut-out at the back.

The jacket stopped below the waist and an a-line skirt in soft material billowed out.

Catherine Walker & Co designed an array of clothes for Diana that ranged from bespoke evening-wear for state visits around Hong Kong, Saudi Arabia and South Korea, to the black dress she purchased three weeks prior to her death, and which she was subsequently buried in.