Ryan Reynolds, 42, is known for comedic leading-man roles like the Marvel superhero Deadpool, who wears a full bodysuit. Turns out, Mr. Reynolds wears a uniform in real life, too.

When he’s not on set, or being the face of the Armani Code Absolu fragrance, he can be found at home in Westchester County, N.Y., wearing a favorite T-shirt, well-worn trousers and trusty pair of boots. “My wife sort of jokes that I don’t need a closet, I need a drawer,” he said, referring to Blake Lively.

I have an old T-shirt that I’ve had for maybe 18 years. It was black, but is gray now. And on the front it says Zukey Lake Tavern. I don’t even know where that is, but it’s a real tavern somewhere in the United States. I’ve had a couple of people say, “No way! That’s from my hometown.” I got it at a vintage store shortly after I moved to Los Angeles from Vancouver, way the hell long ago. Maybe this was in 1998 when everything in vintage stores was like four bucks.

I always wear these Rag & Bone pants that I really like. They make three different colors, and I have them all. They’re cotton pants and not jeans, so they’re trousers I guess. In general, I don’t have a lot of clothes. I don’t have one of those expansive closets full of fancy stuff. Marie Kondo and I would get along great. I just feel like there are a few things that make you feel like they’re you, and are special, and you stick with them. 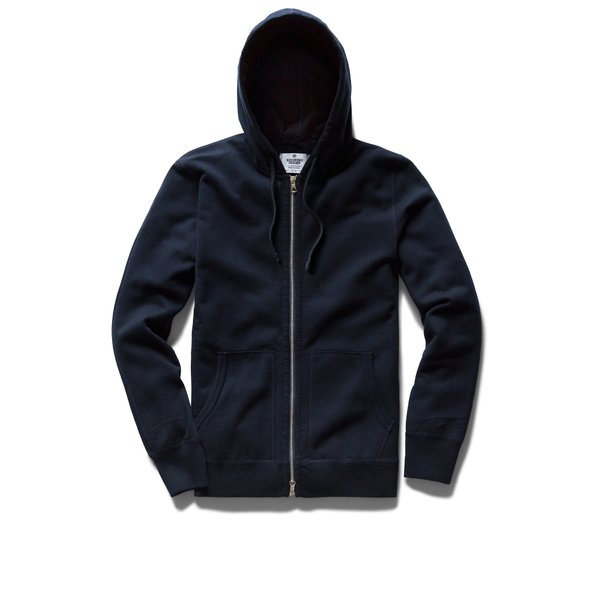 I have a sweatshirt that I am a bit obsessed with. It’s a navy blue zip-up hoodie by a Canadian company called Reigning Champ. I feel an enormous amount of Canadian pride. I make no secret of that, and I do love my home country and my hometown Vancouver. I guess style is a bit about where you grew up. I grew up in a super middle-class house. Everything I wore was at one point worn by my three older brothers (I’m the youngest of four), which is probably why I tend to find something and stick with it. I think I have some appreciation for things that last and are quality and like things that are not disposable.

I have a pair of shoes that I love by McCaffrey. I got them from a movie. That’s where a lot of my clothes come from by the way. Actually for the Armani Code shoot, I wore one suit and an overcoat, and I definitely took them. I mean they were tailored to me, so where else are they going to go? Anyway, the McCaffrey boots are three-quarter and are brown suede and super comfortable. I actually asked if I could get an extra pair, but they don’t make them anymore.

I’ve had a hat for 15 years that I still love. It’s a hat that my wife would kill me if I ever got rid of it. She thinks of it as just indelibly me. It’s an old driving, newsboy kind of hat. It’s made by a guy named John Hanly. It’s called a John Hanly Ireland cap. I don’t know what that means. I only know that because I’ve looked at the back of it for 15 straight years. It’s threadbare. I don’t think it’s going to last. I don’t wear it as much as I used to because I’m afraid it’ll fall apart.