A WOMAN has accidentally exposed her fella's naked picture as she leaves a review of her latest outfit.

As she was giving an insight into her opinion of an outfit from Shien, the woman ended up sharing too much. 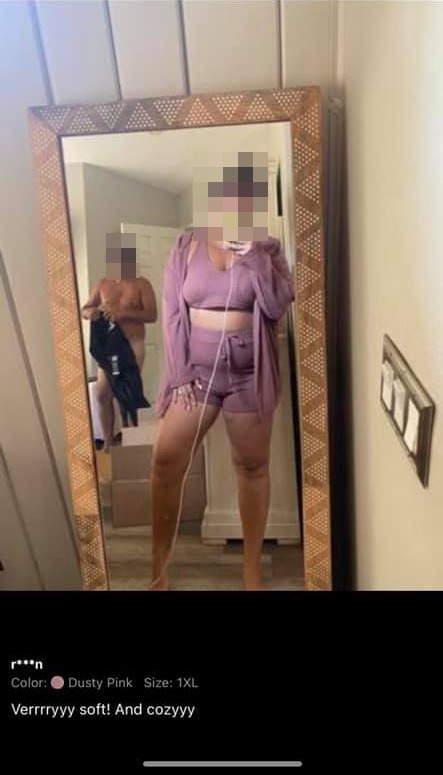 Not realising what her selfie included, the woman posed in front of the naked man who barely had his with his privates covered.

The woman uploaded the picture of "her outfit" to the website in the 'reviews' section on the website.

Behind her, the man is completely naked, but holding up a pair of jeans which luckily hides his modesty.

Overlooking what was happening in the back of her selfie, the woman uploaded the photo to Shien's website with the caption "Very soft and cosy."

The review has received 1468 votes for being "helpful" on the online clothing site.

After spotting the picture when shopping online, one woman shared the review on Facebook with the caption "SHEIN'S reviews are crazy."

People have responded in hysterics with one commenting "At least he’s covered lol."

The poster responded "True" followed by a range of laughing emojis.

In related news see how shoppers are baffled by what clothing brand Shein considers an XL – with customers saying it’s disgusting.

Also, Iskra Lawrence celebrates her curves as a new mum and doesn't listen to trolls.