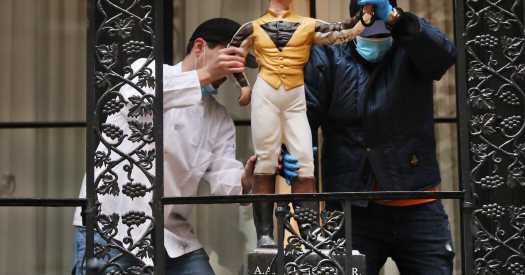 It should not have, but it came as a shock that the jockeys had vanished. There they’d stood outside the “21” Club on West 52nd Street for decades, 35 of them, with their cast metal arms upraised to grasp the reins of some invisible mount, their silks brightly painted in the colors of storied thoroughbred stables. Suddenly, then, they were gone.

On March 9, almost a year since the pandemic forced the city to ban indoor dining, the “21” Club moved to terminate 148 employees, the majority unionized, according to a notice filed with the New York Department of Labor. “‘21’ Club has been an iconic part of the New York experience for nearly a century,” a spokeswoman for LVMH, the private French luxury goods conglomerate that acquired the restaurant as part of a $2.6 billion 2018 deal for the Belmond Limited hospitality group, said in an emailed statement.

The devastating impact of the pandemic on the restaurant and hospitality industries, the spokeswoman added, had necessitated making “the difficult decision not to reopen ‘21' in its current form,’’ but rather to reimagine its “distinctive role in the city’s exciting future.”

What that “distinctive” role is remains to be seen. Yet almost certainly it will not include John Papaliberios.

For 29 years, Mr. Papaliberios, 69, and an immigrant from Sparta, Greece, waited tables at “21,” serving five U.S. presidents, passels of the requisite plutocrats, as well as Broadway stars and Frank Sinatra, the baseball Hall of Fame catcher Mike Piazza and also the man who first acquired him for the Mets.

Among regulars, Mr. Papaliberios’s hands-down favorite was John F. Kennedy Jr., who kept a low profile, tipped well and often rode to the restaurant from the office of his magazine, George, on his bike. Until this week Mr. Papaliberios had reasonably considered the “21” Club a second home, as well as his final destination in a restaurant career spanning a half-century. 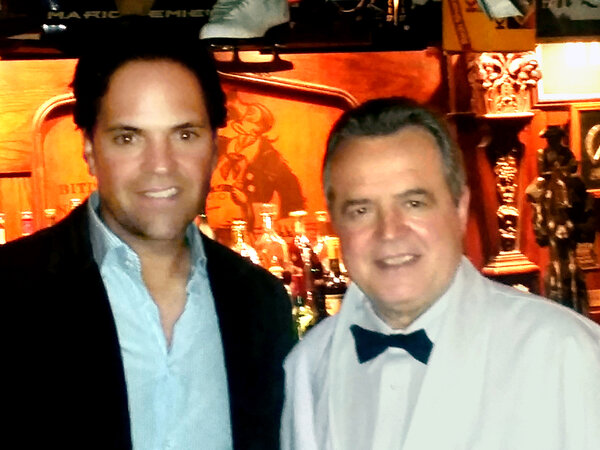 That history was at the center of a flurry of nostalgic press accounts that greeted the restaurant’s closing late last year, at a time when it was still impossible to foresee how wrenchingly the pandemic would alter the retail landscape of New York. And there were abundant reasons to look back with affection at this singular Midtown institution with its wrought-iron gates from 1926, its flickering gas lanterns, the red-capped lawn jockeys donated to the place over the years by people with names — Vanderbilt, Mellon, Phipps — that filled the gossip columns of the past and then eventually, like high society itself, faded into unlamented desuetude.

The “21" Club, was, after all, a rare survivor of Prohibition, that raucous interlude following the passage of the 18th Amendment in 1920 when New York greeted a federal ban on the manufacture, importation or sale of liquor in characteristic fashion by transforming itself into what a temperance lobby, the Anti-Saloon League, blared was “the liquor center of America.”

Opened in its current location on Jan. 1, 1930, at a time when the New York City police commissioner estimated there were 32,000 speakeasies, the “21” Club outlasted almost all of its competitors. It survived the Depression, 9/11, the Great Recession and changing habits in dining to become, after nine decades, an institution. Now it may be lost to a pandemic that has also claimed neighborhood landmarks like La Caridad 78 on the Upper West Side, Colandrea New Corner in Dyker Heights, Brooklyn, and the Monkey Bar in Midtown, sustained on affectionate life support until March by the hotelier Jeff Klein and Graydon Carter.

So relentless in 2020 was the drumbeat of loss that it was initially hard to register the slow-motion decline of “21,” a business-district brownstone that remained an anomalous holdover of the Roaring ’20s; a watering hole of presidents (every one since Franklin Delano Roosevelt, with the exception of George W. Bush); a repository of outlandish lore (camouflage doors, invisible bottle chutes, revolving bars, Hemingway getting busy in a stairwell) that turned out to be substantially true; an adult playpen where Willie Mays’s bat hung suspended from the ceiling of the Bar Room alongside Bill Clinton’s Air Force One replica, Jack Nicklaus’s golf clubs and countless dusty souvenir toys; and the sort of dining establishment where calling for a Rob Roy did not required ironic “Mad Men” quotations around your drinks order.

For most ordinary New Yorkers, of course, the experience of the “21” Club was well out of reach. “It’s a restaurant that’s called a club, which connotes a public space, yet one that’s effectively private,” Meredith TenHoor, an urban historian and professor of architecture at Pratt Institute, said.

“It’s this central node in a network where deals historically get done and decisions get made,” Ms. TenHoor added, and this is perhaps why Donald J. Trump frequented the restaurant and even chose it as the setting for an election victory dinner in 2016. “He liked to greet everybody when they walked by,” Mr. Papaliberios, the waiter, said, referring to Mr. Trump’s preferred table, No. 11, along a wall on the way to the bar.

Yet for those with the means to dine there at the “21” Club had become largely passé, the sort of spot you imagine visiting but seldom do — and with good reason.

There was the restaurant’s notoriously exclusive seating policy, for one thing — may I show you to Siberia, section 17, at the very back of the townhouse? There was a tiresome dress code requiring gentlemen to wear jackets that eventually relented, relieving them of ties. There was the pedestrian food that was already considered overpriced in 1950 when, two decades after the birth of the modern hamburger, “21” was charging $2.75 for a burger that coffee shops of the era were serving for little more than a dime.

“It is one of those restaurants that people mourn though they haven’t been there for years,’’ said Paul Freedman, a Yale history professor and culinary historian whose book, “Ten Restaurants That Changed America,’’ notably omitted the “21” Club from the list. “Lüchows was like that,” Mr. Freedman added, referring to a 14th Street institution that closed in 1986 after a 104-year run. “It was terrible for years, but still endearing because of the experience of being there.”

For habitués, the place evoked the atmospherics of an exclusive club: the hushed atmospherics, the indifferent décor, the soothingly sentimental bric-a-brac, the implicit understanding that, as one was being inducted into a special sanctum, almost certainly someone else was being kept out.

“I loved the place,” said Stanley D. Petter, 86, a pioneering Kentucky thoroughbred breeder and bloodstock agent. “It was the atmosphere and the feeling that it was something you had done when you were younger and it was always nice to be welcomed back.”

Reliably the “21" Club was where Cornelius Vanderbilt Whitney, known as “Sonny,” and other members of a gilded elite repaired after the National Horse Show, the oldest continuously held horse show in the country and a key fixture on the calendar of now-vanished New York. “It’s strange when you consider that, within my lifetime, I’ve seen the rise and fall of most of what they used to call Society,” Mr. Petter said.

If, as its owners suggest. the “21” Club does eventually return, it will surely be in a form those people would have found unrecognizable. And if the restaurant resurfaces, as some in the hospitality industry predict, as a branding anchor for one of the high-end hotels LVMH has set about developing as it seeks to expand its reach beyond luxury goods, it would be following a formula those like the proprietors of Carbone or Ralph Lauren at the Polo Bar have deployed with great success: quoting New York back to itself.

Whether they will be doing so with unionized workers remains open to question. “It’s a sad, sad time,” said Bill Granfield, the president of UnitedHere! Local 100, a restaurant worker’s union. “If am a sommelier or a line cook or a banquet busboy, what have I moved to since March of last year?”

Central to the legacy of the “21” Club is another group besides its patrons, said Carmen de la Rosa, a New York State Assembly member who rallied to preserve employment for longtime workers first furloughed and now left to survive on federal stimulus payments as their union lobbies to preserve their jobs. “Places like the ‘21” Club don’t exist in my community, to be honest,” said Ms. De la Rosa, who represents the 72nd District, in Upper Manhattan.

The survival of such places, she added, is not only crucial to livelihoods but also to the city’s economic and cultural vitality. “I’m an immigrant from the Dominican Republic, and when I go into these settings and look over and see someone Colombian, Dominican or Mexican that has similar experiences to mine, I don’t want that to be lost,” she said. “That’s the essence of what makes New York a beautiful place to live in.”

Nor does Maria Veramendi, 46, the restaurant’s first woman banquet captain, whose job loss will force her to move out of the city, she said. Nor Mr. Papaliberios, who said that after working at fine dining spots around the city, he landed at the “21” Club certain it was “the place I’d been looking for all my life.” Nor Katia Malarsky, a 34-year-old pastry chef who, if she reluctantly traded the high excitement if low-wage life of a freelance kitchen worker for regular hours and health insurance, found to her surprise that her seven years at the “21” Club have felt like the acme of her career.

“There’s a reason I stayed,” Ms. Malarsky said, referring to the rush she got each time she walked past the lawn jockeys that were carted off in December — for “restoration” as an LVMH spokesman said.

“The name has gravitas,’' said Ms. Malarsky. “When I told my grandfather I’d gotten a job at the ‘21’ Club, he was the proudest he’d ever been.”