The House That Grief Built When visiting the newly restored private apartments of the Duke of Aumale at the Château de Chantilly outside Paris, you could easily think you were seeing the interiors of an 18th-century French castle. The rooms are sumptuous, with purple damask-covered walls, marquetry-inlaid furniture, parquet de Versailles floors and exquisitely carved boiseries, or wooden panels, depicting musical instruments and garden implements.

It all seems very grand, though these rooms were actually redone in the 19th century, but the décor is linked to utter tragedy.

In 1830, the Duke of Aumale, one of the eight children of the king, Louis Philippe d’Orléans, inherited the estate at 8, after its rightful heir was shot by a firing squad on Napoleon’s orders. The young duke attended school in Paris and chose a career in the army. He distinguished himself in military campaigns in Algeria.

In 1844, he married his cousin Marie-Caroline, the daughter of the Prince of Salerno and a grandniece of Marie Antoinette, and hired the fashionable society decorator and court painter Eugène Lami to design the interiors of the old private apartments in a ground-floor wing of the castle.

Then came the revolution of 1848. The monarchy fell, forcing the duke and his family into exile in England (with their furniture, fortunately). Chantilly was sold. 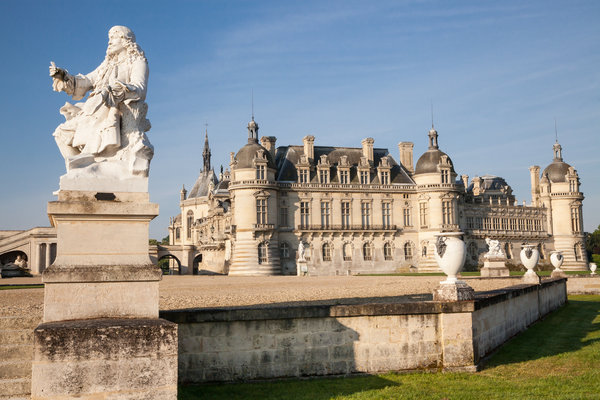 The duke could not return to France for more than 20 years, until the fall of the Second Empire in 1870, when Napoleon III was overthrown. In the meantime, the duke’s wife and older son had died in England. He returned to France only to witness his younger son die from an illness.

The duke regained ownership of Chantilly. In his grief, he re-created the old private rooms with their original contents, precisely as Lami had decorated them in the 1840s.

“These private apartments became his ‘cemetery,’ as he called them,” said Mathieu Deldicque, curator of the Condé Museum at Chantilly. “Furniture was placed precisely where it had been earlier.”

Eventually, the duke bequeathed the chateau to the Institute of France, so the décor and collections would be protected and open to the public. After his death in 1897, the private rooms were closed and remained closed until the 1990s.

Now, Mr. Deldicque has overseen the full, detailed restoration of the suite of rooms, a two-year project costing 2.5 million euros, about $2.8 million. The restoration included meticulously removing centuries of overpainting on the 18th-century boiseries, fixing the gold-inflected plaster cove ceilings, reinstalling elaborate curtains and swags, and reupholstering the furniture with elaborate trim. The rooms opened in February.

Sarah Lavoine, a modernist designer in Paris (and a Polish princess), recently toured the apartments and photographed decorating details that caught her eye. The following conversation with her has been edited and condensed.

What was your overall impression of the private apartments?

It was a chance to visit a unique place in history and see the work of craftsmen with real know-how. I found the details incredible. In this mix of 17th-, 18th- and 19th-century works, each piece conveys a style, treats color or addresses noble materials. It is part of my definition of interiors: Break codes, and don’t be afraid to mix colors. The door lock, in particular, is an ode to craftsmanship.

As a modernist, how did you react to the 19th-century decorator Eugène Lami’s take on the Louis XV and Louis XVI styles?

I learned a lot about Lami, thanks to the special exhibition about him now at the chateau [until May 19]. He used strong color to create a universe. His work is close to my relationship with color.

In your own photos of the rooms, why did you focus on the red ribbon border applied to a panel on the dark blue wool walls of the duke’s office and former dining room?

The mix of the blue and red is very modern and impressive for that time. I liked the strong color combination and the way Lami matched fabrics with wool, silk and a wood frame. It’s very graphic. And the walls of the room are “dressed” — to me, this is “couture decorating.”

What is it about the English-style, paneled bathroom that attracted your attention?

The game of light gray and white, the combination of marble and white-painted wood, I found resolutely modern and timeless. There is a purity to this room, like a modern total look, which makes it a real contrast with the other rooms.

And the inlaid marble floor?

I liked its graphics, the combination of colored marbles, and I found the craftsmanship unique and modern.

What was it about the specially commissioned 19th-century marquetry-inlaid Grohe Frères piano in the music room that attracted you?

It is deeply contemporary and interesting to adapt furniture to the shape of a room. The Purple Salon is romantic in style and completely round in shape. The curved back of the piano marries the shape of the room perfectly.