The troubled marriage between the Kardashians and fashion’s bad boys

Four years ago billionaire Italian designer Stefano Gabbana allegedly described the Kardashians as the “most cheap people in the world,” but on the weekend his label Dolce & Gabbana was cashing in on the publicity as the unofficial outfitter for the first family of reality television’s latest wedding spectacular.

Kourtney Kardashian married drummer Travis Barker in Portofino, Italy, wearing a satin mini-dress featuring one of the label’s signature corsets, while manager mother Kris and sisters Kim, Khloé, Kendall and Kylie posed across the festivities in an array of animal print, religious motifs and DG logos. 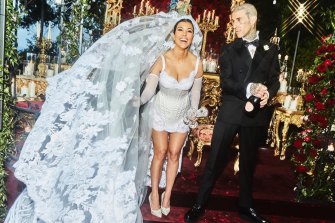 The “most cheap people in the world” looked expensive, but with Domenico Dolce and Stefano Gabbana hosting the wedding at their estate, Villa Olivetta, and the copious social media coverage, it is easy to assume that the Kardashians did not have to open their D&G wallets wide.

Changes of heart are easy to understand, just ask Kim Kardashian who has been married three times and is currently dating SNL comedian Pete Davidson, but Gabbana’s about face could have more to do with the brand’s troubled reputation than love.

Since 2018, Dolce & Gabbana has been crawling its way off a fashion blacklist following short films from the label featuring a Chinese model eating spaghetti, pizza and cannoli with chopsticks, that was widely perceived as racist.

“Let’s use these small stick-like things to eat our great pizza margherita,” the voice-over announced as a Chinese model covered her face and giggled. Leaked racist comments from Gabbana’s Instagram account fuelled the growing backlash, with the designer claiming his account was hacked when they were made public on fashion watchdog Diet Prada’s account. It was Diet Prada who also said that Gabbana had allegedly commented on an image of the Kardashians: “The most cheap people in the world.”

Dolce & Gabbana were forced to cancel a runway event in Shanghai, had their clothing removed from Net-a-Porter’s Chinese site and faced protests from Chinese customers, including director and writer Xiang Kai who burned $US20,000 ($28,215) worth of designer products, as the #BoycottDolceGabbana took off.

Both designers, Gabbana and Domenico Dolce, issued an apology in 2018. “We have always loved China passionately, and our countless visits to China have made us love its culture even more. Of course, we still have much to learn. With regards to our earlier transgressions, we must apologize.”

They followed this up by filing a defamation suit against Diet Prada seeking approximately $780 million in damages. In response Diet Prada established a crowdfunding page which has reached more than $93,000.

Apologies are familiar terrain for Dolce & Gabbana. In 2015 Dolce was forced to ask forgiveness after telling the Italian publication Panorama: “We oppose gay adoptions. The only family is the traditional one.” He described children born through IVF as “children of chemistry, synthetic children. Rented uterus, semen chosen from a catalogue.”

Those familiar with Kourtney Kardashian’s IVF journey with Barker, currently screening on The Kardashians on Disney Plus, might find the Dolce & Gabbana alliance ill-fitting. There’s also Kourtney’s comments against racism in 2020 on her lifestyle blog Poosh: “The pain and suffering inflicted by racism is not a thing of the past and I bare [bear] the responsibility to speak with my kids honestly and often about it, even when the truth is uncomfortable.”

The wedding is the most recent example of fashion’s short memory. In 2011 John Galliano was fined by a Paris court for racist and antisemitic rants at people in a Paris bar and removed from his post as creative director at Dior. Two years later US Vogue editor Anna Wintour helped Galliano find work at Oscar de la Renta before he moved to Maison Margiela as creative director in 2014. 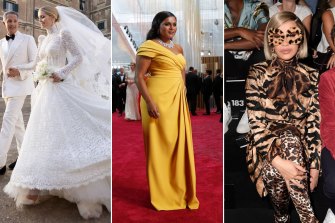 Galliano has been praised by the Anti-Defamation League for attempting to learn from his remarks about Jews, Hitler and the Holocaust.

Kimora Lee Simmons, Lisa Rinna, Harry Hamlin, Coi Leray, K-pop singer CL and model Behtai Prinsloo-Levine all attended Alexander Wang’s runway show in April, the first since the designer was accused of sexual assault and drugging male and transgender models in 2020. Initially denying the claims, in 2021 Wang posted a statement to Instagram saying that he would “set a better example.”

Dolce & Gabbana’s redemption has been slower than most. Celebrities such as Mindy Kaling, Cardi B and Jennifer Lopez have worn the label on the red carpet. In July Princess Diana’s niece Lady Kitty Spencer wore a Dolce & Gabbana wedding dress to marry fashion executive Michael Lewis, along with six other pieces from the brand during the celebrations in Rome.

It remains to be seen if the Kardashians’ fashion amnesia will spread but considering how their own controversies fade into the background, with Kim at one point planning to name her successful Skims shapewear line Kimono, #BoycottDolceGabbana could be so last season.