Two of Us: How the duo behind hot fashion label Aje balance their ‘creative tension’ Adrian Norris, 34, is the CEO and creative director of fashion label Aje, where he works with fellow creative director Edwina Forest, 36. The pair met in 2005 when Edwina mistook Adrian for a hapless Norwegian tourist. 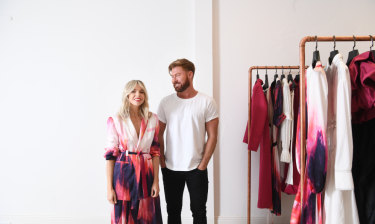 ADRIAN: I first met Eddie in a store in Brisbane in 2005; I was lost and asked her for directions. I was very dressed up and thought I was cool, and Edwina looked incredible. She thought I was a Norwegian model – although she likes to say tourist! That night I went out for drinks at a party and she was also there. We've been inseparable friends ever since.

I had moved to Noosa from Sydney with my family when I was 11. After school I studied art in Venice but soon fell in love with fashion. For my 21st my parents gave me some money to open a shop, so I had opened Strada in Noosa in 2005, selling clothing by Australian designers.

Eddie came to the store's opening party. She had experience in retail and I needed help, so she began working with me in the store.

I started producing clothes because I saw a gap in the market. The clothes I was buying for Strada weren't suitable for Noosa and others weren't appropriate for when customers returned from their holiday to Sydney or Melbourne. That's how Aje started. I'd designed two collections and remember bringing back the third from Bali, where they were produced, and it was awful. I called Eddie and said, "I really need you to come and style this." We reworked it together and it felt like magic. She brought something I didn't have: that beautiful fashion and styling eye. We created a collection together in 2008 and it's still one of my favourites.

Relationships in business are difficult, especially when you mix friends and business, so we made a pact that if either of us was pissed off we'd talk it through. Eddie loves beautiful things, as do I, but I won't make beautiful things unless there's a reason. Trying to find that balance is definitely where most tension comes from. It's a creative tension.

Around six years ago Aje faced financial ruin. It was affecting our business decisions, life decisions; it wasn't a fun place to be. The banks hadn't given us money, so we'd scraped money together and borrowed from family to run Aje. That hung over us because we knew that if we didn't succeed, our parents could lose whatever they'd put on the line for us.

I’m not afraid of anybody’s opinion, except Edwina’s.

I did a lot of financial mapping and figured out which way Aje needed to go but I needed Edwina on board. I said, "I'll fix this but you need to trust me, or we shut this down and walk away." One thing Ed has always done is trust my business decisions.

We have an intense relationship. We know everything about each other and we're best friends. When Edwina met [her husband] Felix, it took a bit of time to work out where he and I both fit. He's now one of my best friends.

I'm not afraid of anybody's opinion, except Edwina's. Everyone wants to be Eddie but she has no awareness of the impact she has. She's one in a million.

EDWINA: I had finished university in Queensland and it was the summer before I moved to Sydney to begin an internship with Russh magazine. I was working in a Brisbane boutique when this poor, lost Norwegian tourist came in. He had golden, shoulder-length locks and wore a white open shirt, skinny jeans, a big Dolce & Gabbana belt and white cowboy boots. His sense of style was not Brisbane! That night he was at a party I was also at and I found out he wasn't Norwegian, he was Australian, and he was Adrian.

When I met him, it was like the feeling I had when I met my husband Felix, that instant click. The connection was so instantaneous I left the boutique and helped him at his shop.

We had this amazing three months working on the shop floor, drinking champagne in the middle of the day; we created a fun vibe. I later moved to Sydney but we spoke all the time and he'd come to Sydney on buying trips.

Around 2008 Adrian said he needed help creating a unique brand to sell in his store, and that's how Aje was born. Adrian moved to Bali, where we were producing. I worked as a freelance stylist so would visit him there for a month at a time to brainstorm. We were selling our clothes through Strada and also wholesale to high-end Australian boutiques.

About five years in, we tried to cement our brand ethos but our clients began asking for different things and we felt we were getting pulled in different directions. We were also not getting paid by a lot of people and we started to struggle. Suddenly the world crashed in and we couldn't afford to keep going. Adrian's family had given so much – my family, too. It was so stressful. We borrowed a bit more from family and decided to concentrate on retail.

At this point Adrian really blew my mind. It was like he woke up one day and had this business brain; he realised our inability to understand the business side was the thing that was letting us down and began to take a real interest, from the leasing of cheap shops in cool areas to painting the floor ourselves.

Our relationship is like a marriage. In the early days we fought like you fight with family but we always socialised together and at day's end we'd have a glass of wine and talk it through.

Adrian is determined, feisty, charming and has a beautiful big heart. Creating Aje has been like giving birth, which is a weird thing to liken your business to, but so much of your heart, soul and life goes into this thing, and you can't do it with just anybody.

Aje opens the Mercedes-Benz Fashion Week Australia in Sydney on Sunday, May 12.

To read more from Good Weekend magazine, visit our page at The Sydney Morning Herald, The Age and Brisbane Times.