A RECENT study found that women in their 50s are far more confident than 20-somethings.

Here, three women tell us why. 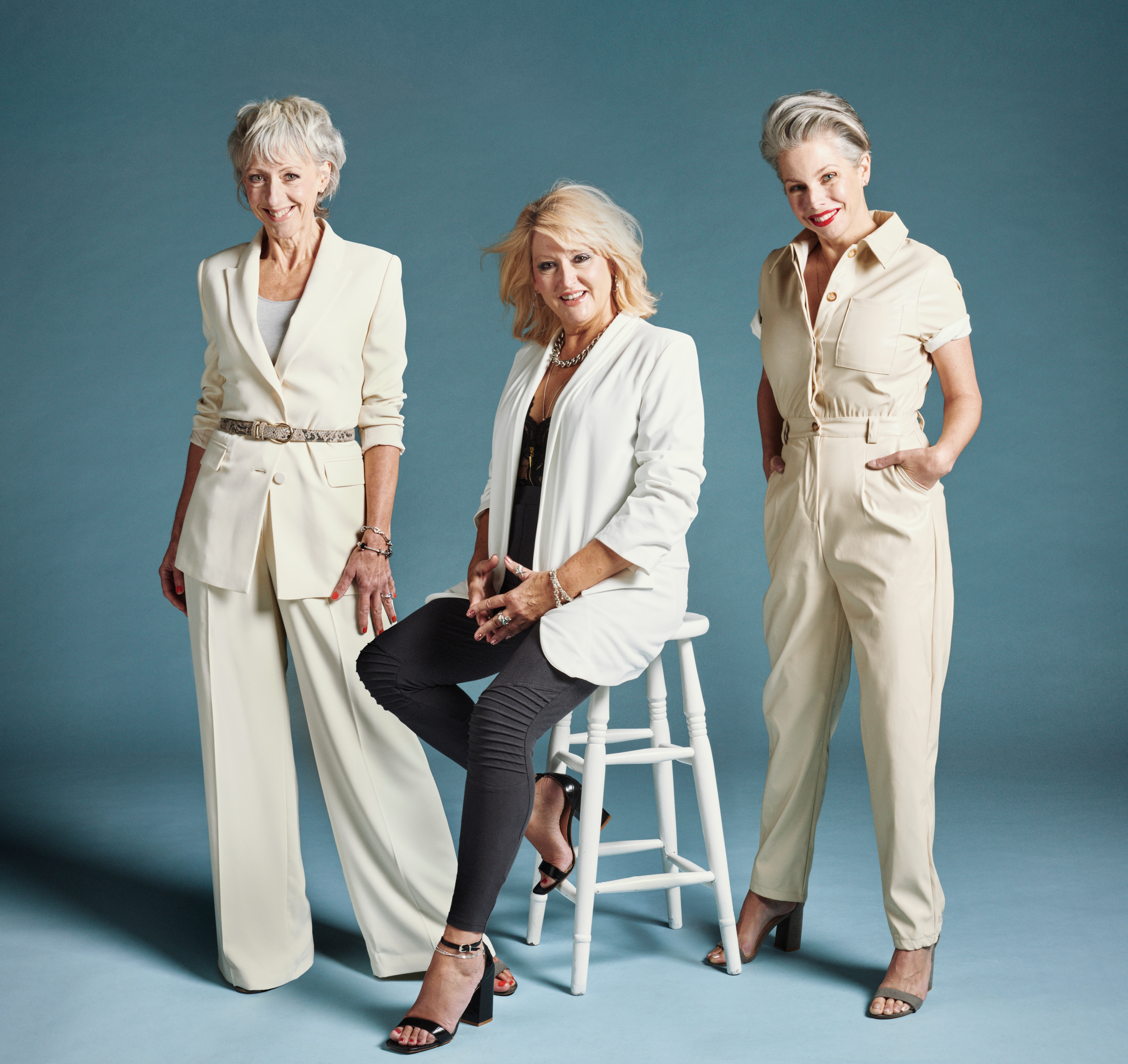 “Opening the changing-room door, I walked out to do a twirl for my husband Wayne. I’d avoided skinny jeans my entire life, hating the idea of squeezing my size-26, 5ft 7in body into them. 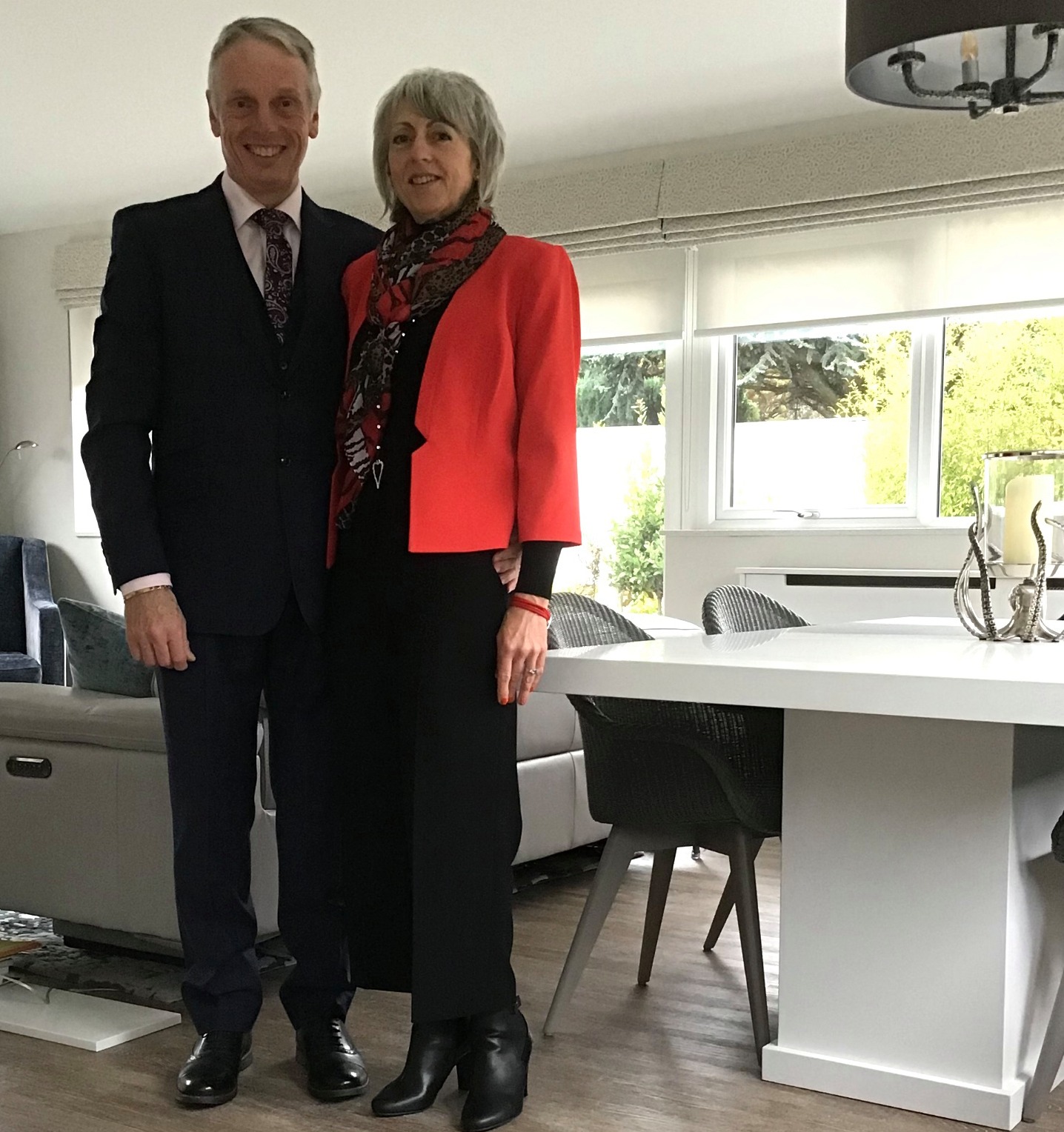 “When the shop assistant had handed me a couple of size-8 pairs, I’d almost laughed in her face. Even after losing nearly 9st, I thought there was no way I’d get into them. But to my delight, they were perfect.

“Growing up, I was always overweight. In our family, food was a source of comfort – having nice treats was how we showed each other love. I was the fattest girl in my class and by age 13, my nickname was Blobby, which was mortifying.

“The following year, Wayne was posted to Sardinia and I got a job running a souvenir shop there. We were living the good life and my weight sky-rocketed. By the time we moved back to the UK four years later, I was size 26, weighed over 18st and was desperately unhappy. 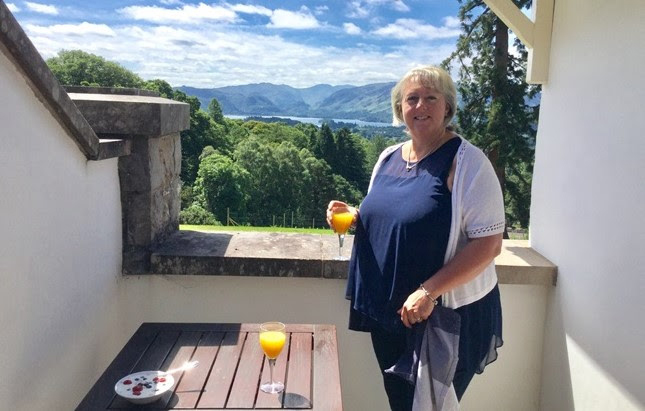 “Over the years, I tried crash diets like the Cabbage Soup Diet and Atkins, but could never stick to them. I worried endlessly about what I would wear, trying to hide my figure under baggy tops and skirts and uncomfortable control underwear.

“I was so self-conscious, I’d end up cancelling nights out with friends, while holidays were always spent in private villas with our own pool so that I wouldn’t have to face anyone in my swimming costume. My weight affected my health too – I developed asthma and chronic heartburn.

“In August 2018, I confided in my friend Elaine, who offered to take me along to her Slimming World meeting. I made excuses in my head – I was too busy and diets didn’t work anyway – but forced myself to try it.

“From the moment I walked in, I loved the camaraderie. I was shaking as I got on the scales and saw that I weighed 18st 4lb, but I was determined that it was time to change.

“Previously, I’d skip breakfast, have chocolate mid-morning, lasagne and chips for lunch and more chocolate in the afternoon. Dinner would be a bowl of pasta with an entire garlic baguette, washed down with nearly a whole bottle of wine. 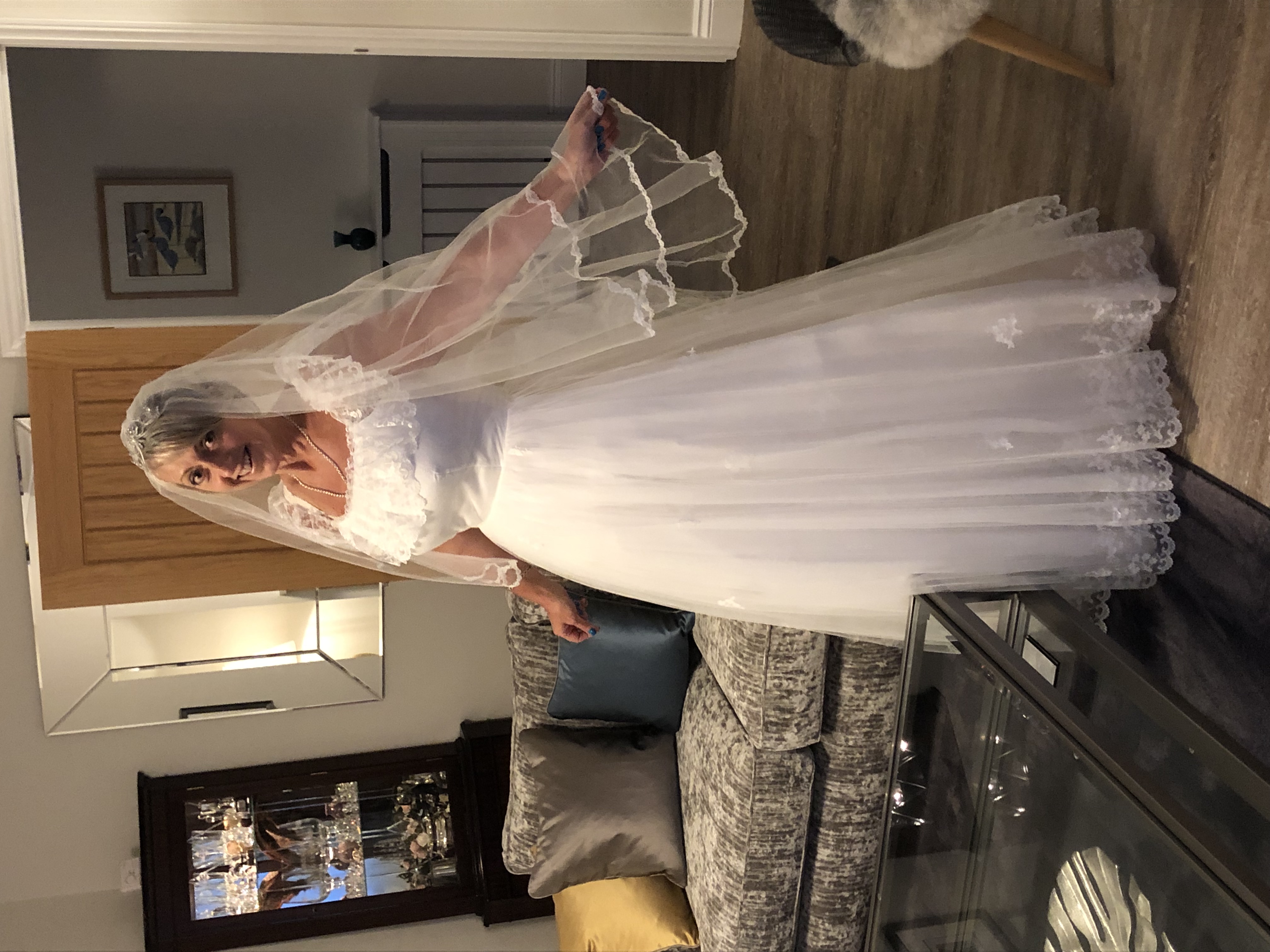 “But after attending that first meeting, I started having oats for breakfast, salmon for lunch, and homemade curry made with loads of veg for dinner. I ditched the wine for elderflower cocktails and snacked on fruit instead of my usual sweet treats.

“I also started going to aqua aerobics once a week, after years of avoiding swimwear in public. I was nervous at first, but as the weight came off, my confidence soared.

“In November 2019, I was ecstatic to hit my goal weight of 9st 2lb, 64 weeks after starting the plan – and I’ve maintained that weight ever since. I no longer need to use my inhaler, and I’m fitter than ever. I can wear things now I wouldn’t have dreamed of, such as fitted dresses and, of course, skinny jeans.

“Pre-Covid, Wayne and I loved going out dancing – it was something I would never have done before, and being able to move my body around the dance floor made me feel incredible. My relationship with Wayne is better than ever, too, because I feel sexier and he can see how much happier I am.

“I never would have believed it was possible to feel this amazing in my 50s. It makes me sad that I wasted so many years being unhappy with myself. I’m proof that it’s never too late to overhaul a lifetime of bad habits.”

‘I lost my boobs and gained a friend with benefits’

“Walking into the party in my slinky red dress, I noticed a handsome man do a double-take as he spotted me. A few hours later, I left with his number, happy that at 59 and after a double mastectomy, I could still feel – and look – sexy. 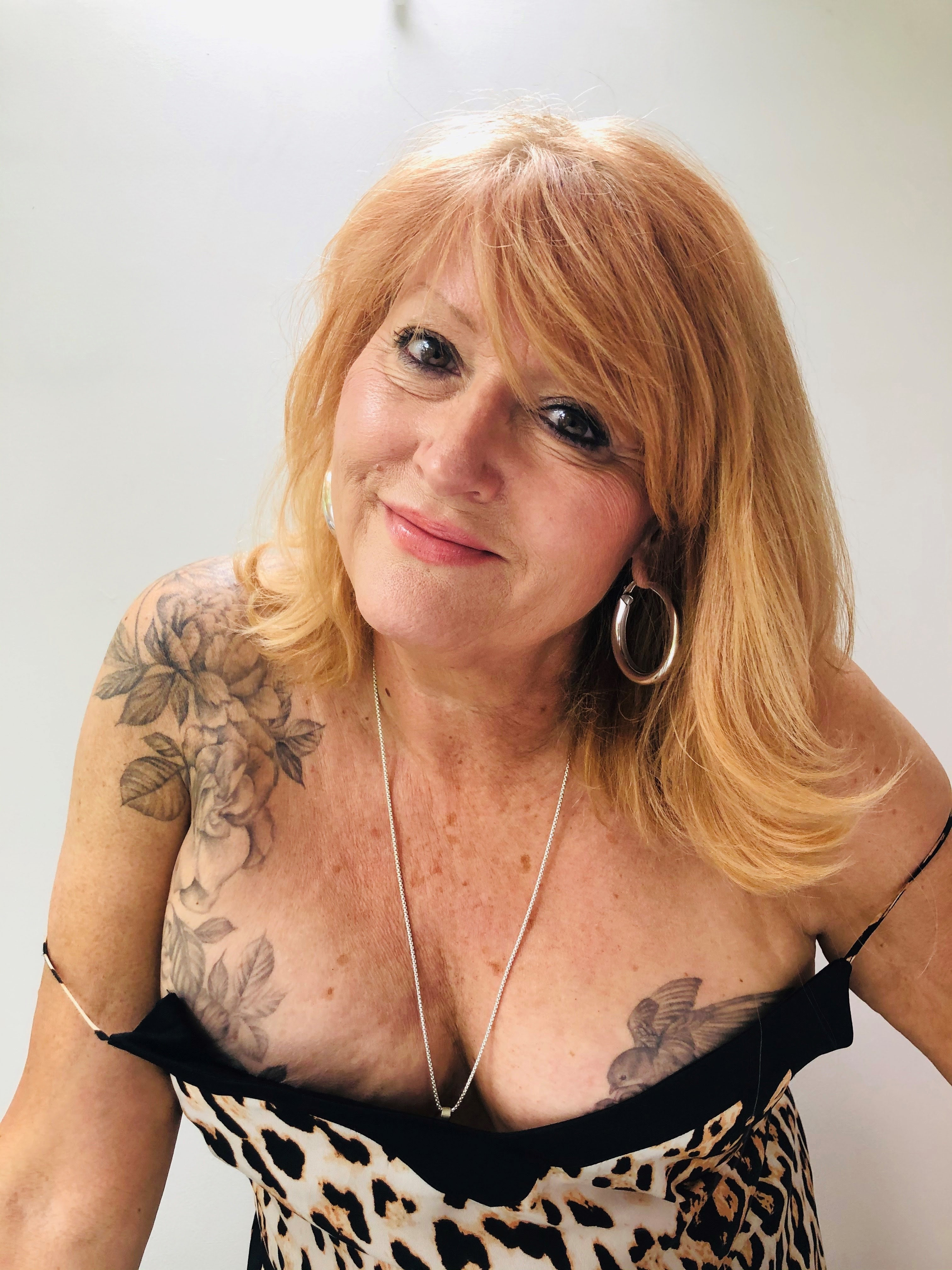 “I was 54 in October 2016 when doctors diagnosed invasive lobular breast cancer after a routine mammogram showed a blurry area. I’m a pragmatic person and I took it in my stride, especially as doctors were confident I’d be OK.

“At the time, I was in a long-term relationship but we split up soon after I received my diagnosis, and I ended up living alone. But I knew my kids Chay, now 33 and Dollie, 23, would be there for me throughout the treatment, as well as my sister Mel, 58, who is my rock.

“I had several unsuccessful surgeries to remove the cancer, so in May 2017, I had a double mastectomy. I didn’t feel sentimental about losing my 38EE breasts – I just wanted the next stage of my life to begin.

“A year later, I had my new implants. I liked how perky they were, but without nipples, there was something missing. So I chose to have a beautiful floral tattoo across them. 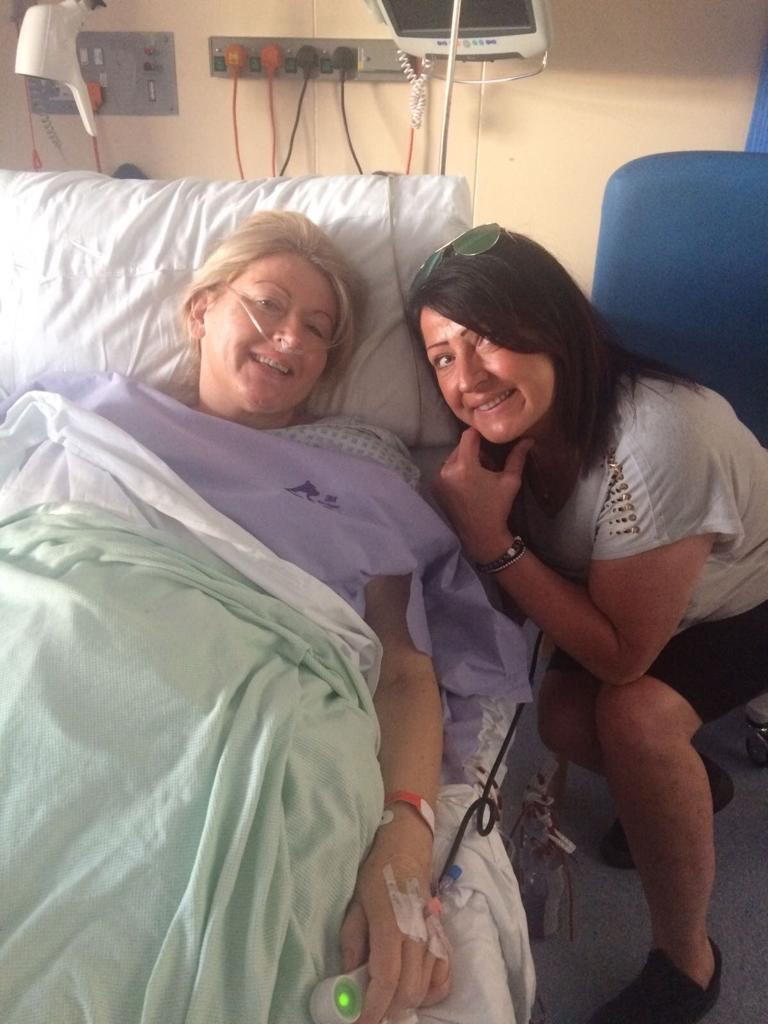 “But even with my new boobs, my confidence plummeted. The cancer treatment left me with joint pain and sped up the menopause, causing vaginal dryness. Feeling like a withered old woman, I wondered whether I’d ever be up for sex again.

“Chatting about my worries with a friend, he suggested I ‘get back in the saddle’ – with him! I’d known him for a decade, and there was always a spark between us, plus I knew I could trust him.

“Still, I was so nervous – it felt like losing my virginity again. But we took it slowly and I felt really happy. We still sleep together on occasion but keep our relationship as ‘friends with benefits’.

“In October 2018, a breast cancer charity put me in touch with an Ann Summers focus group looking at learning to love sex after breast cancer. 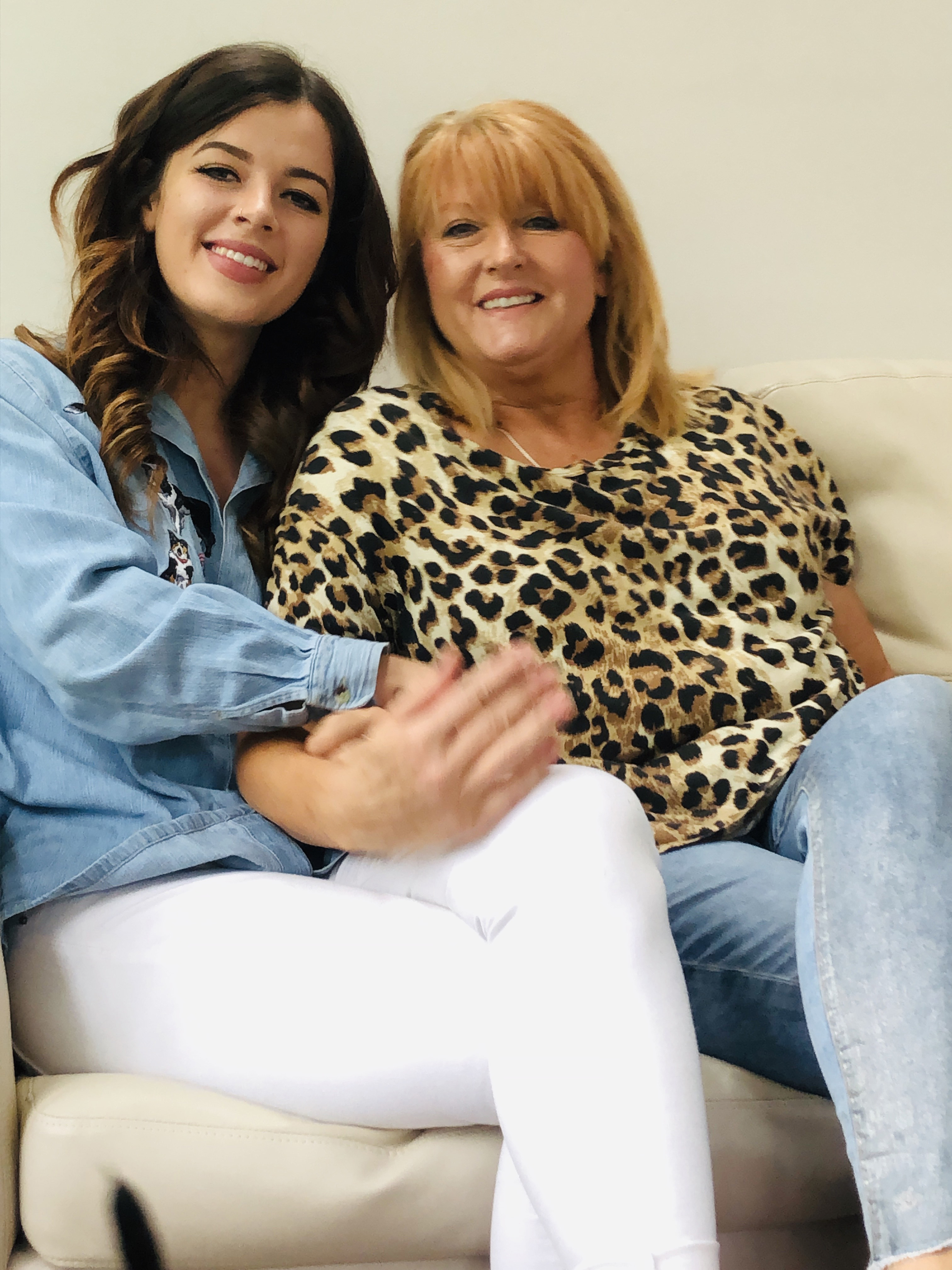 “For a year, I met up with the group, and I found it really empowering – even though I work as a sexual health advisor, it can be hard to find other people who understand what intimacy is like after cancer. We laughed, cried and shared tips, such as using vaginal moisturiser and sex toys to encourage blood flow to the area.

“As my confidence grew, I decided to try online dating. I went on quite a few dates and slept with a few men I met. I saw one guy, James*, for a while and we had great sex – it was lovely to know that he found me attractive, new body and all.

“Sex is different now – it’s less spontaneous as I need to prepare with lube. But when I look back at sex in my 20s, when the men I was with didn’t know what to do and I didn’t know how to ask for what I wanted, I can honestly say I prefer it now. I used to lie in bed and hold my stomach in, but now I’m proud of my body and everything it does for me.

“It fizzled out with James, but I’m not desperate to find someone. I have amazing friends and we know how to have fun – we love going to ‘70s-style funk evenings and dancing all night.

“I feel more confident, too. Losing my breasts has helped me come out of my shell, as I used to worry that people were only interested in my cleavage. Maybe it’s being in my 50s, maybe it’s surviving cancer, but I’m happy and I don’t care what other people think of me.”

‘Embracing my grey hair helped me become a model’

Nicola de Burlet, 50, runs her own PR company and lives in London with her husband Seb, 51, a painter and decorator, and their son Robert, 11.

“Tilting my head back and placing a hand on my hip, I smiled for the photographer. With the professional hair and make-up and gorgeous clothes, I had no doubt that I looked better at 50 than I did at 30, but I still couldn’t believe I was working as a professional model. 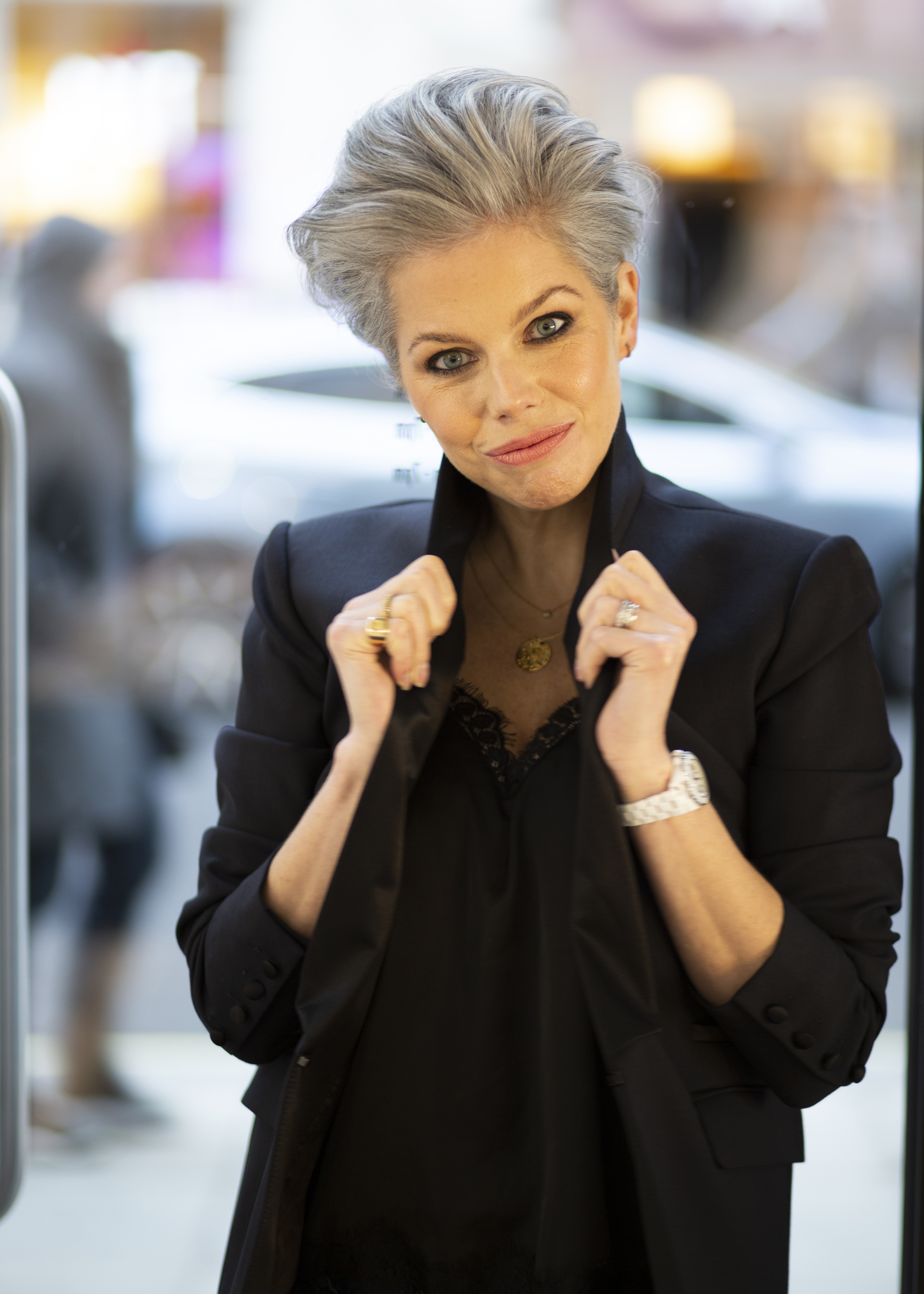 “As a teen growing up in the ’80s, I was chronically shy. With my mousy hair and NHS glasses, I would blush if any boys so much as spoke to me. I was skinny until the age of 16, when my boobs seemed to grow to a G cup almost overnight. I hated the attention they brought and would cover up in baggy jumpers, walking the long way home to avoid the catcalls of sleazy builders near my house.

“I was still shy when I began studying French at the University of East Anglia in 1988, but I tried to enjoy uni life. After graduating, I fell into working in PR, and a few years later landed an amazing job in Paris. I became interested in clothes, and learnt how to shop at Zara and make it look like high-end fashion.

“My confidence grew, but my hair was going grey – which I was mortified about – and as it worsened in my late 20s, I turned to box dyes to cover up my secret, terrified of looking old. I got married in 2001 to a Parisian called Ben*, and my career went from strength to strength.

“The marriage didn’t work out, and I moved back to the UK in 2005 after my divorce, working in PR in London. I ended up reconnecting with Seb, an old friend from sixth form, and we hit it off right away. We married in 2008 and the following year, aged 39, I gave birth to our son Robert. 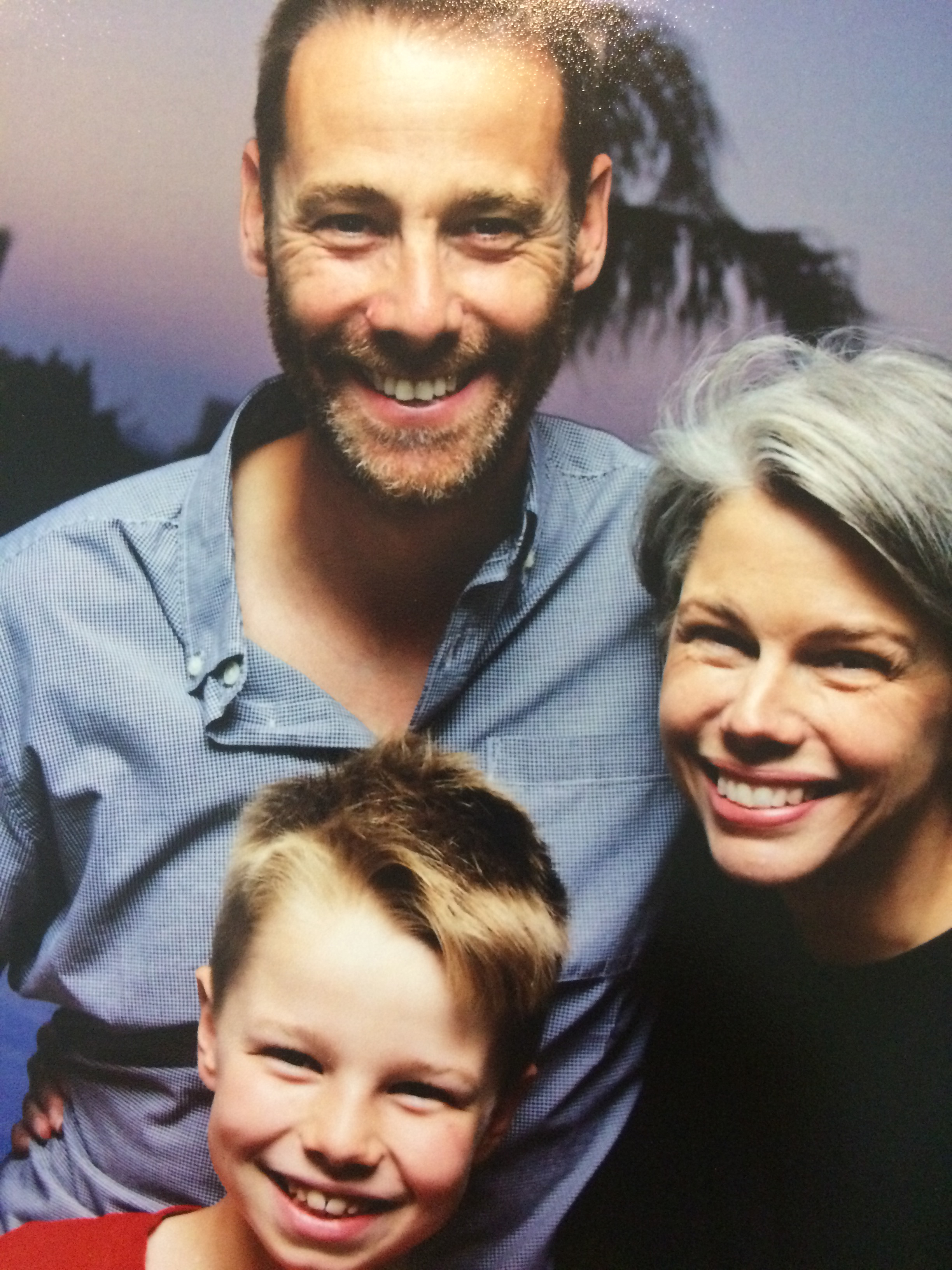 “Five years ago, I watched The Devil Wears Prada and I thought Meryl Streep’s silver hair looked incredible. I was sick of spending four hours getting my roots done every five weeks, so decided to brave my natural locks.

“I worried that my hair would be like a flashing light over my head saying: ‘Old’ but I felt amazing. I did have concerns that Seb wouldn’t find me sexy any more, but he says I look better than ever. Now, women come up to me and say that they want to grow their colour out too.

“In June 2019, a friend told me that Charles Worthington was looking for silver-haired models and the brand was having trouble finding the right women. I laughed when she said I should go to the casting, but she twisted my arm and I was astonished when I got the job.

“A year on I’ve done two campaigns with Charles Worthington, a Smashbox shoot, and landed an agent. My bookings this summer were cancelled because of Covid, but I look forward to doing more.

“I’m currently experiencing the perimenopause, which does make me feel a bit crap, but I’m patched up to the hilt with HRT and I recommend the medication to anyone who’ll listen.

“Regardless, I feel better about myself now than I ever have before. My mum’s generation had to stay at home quietly in their 50s, but we’re putting ourselves out there – and living our best lives.”