Where to Show Off Your $5 Million Horse

BRIDGEHAMPTON, N.Y. — They look innocent enough, the $6 pony rides near the entrance to the Hampton Classic, the splashy outdoor horse show that is the Burning Man of the boots-and-spurs set.

Around and around go the toddlers on Jazz, the long-maned roan pony, as their parents snap smartphone candids. Little do they imagine that this simple photo op may prove to have been the gateway drug to a costly horse sport addiction.

Undoubtedly if those selfsame parents paused to consider how much money they would end up spending over a lifetime on what may be among the costliest of all athletic pursuits, they would quickly hustle their tykes off to see the llamas at the on-grounds petting zoo.

But that won’t happen. This is the Hamptons, after all, where conspicuous consumption is an Olympics-caliber sport.

By midmorning on the Friday before Labor Day, the supply of $100 a pound lobster salad at the Loaves & Fishes food stand has all but run out, and the shelves at Citarella resemble those of a Gulf Coast Publix in advance of a hurricane.

The eastward crawl on Route 27 has become a cartoon motorcade of Maseratis, Lamborghini, convertible Bentleys and, during this 44th edition of the Hampton Classic, Ford F-350 trucks towing air-conditioned 4-Star gooseneck horse trailers, a form of equine transport that Horse & Hound magazine once judged as luxurious as a five-star hotel. 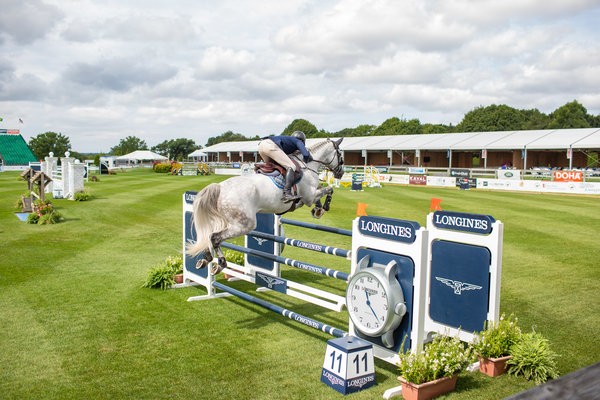 To be sure, this horse show — which showcases more than 1,500 horses competing in 200 classes at all levels of age and ability, including Olympic medalists and those with disabilities — has its egalitarian dimensions. Yet for the 60,000 spectators expected this year, at least part of the appeal is the opportunity to observe at close range that segment of the American population in possession of the greater percentage of its overall wealth.

That fact is not lost on the show’s organizers. At 25 square miles, Southampton (of which Bridgehampton forms a part) is one of the larger towns in the United States, encompassing both some of the country’s priciest real estate and, in certain pockets, people living paycheck to paycheck.

“You have houses on the beach that cost $50 million,” said Dennis Suskind, a former general partner of Goldman Sachs and president of the Hampton Classic for over three decades. “And people in Flanders” — a hamlet south of the Peconic River — “who have trouble to pay the electric bill.”

With that in mind, Mr. Suskind pegged admission to the show at $10, adding: “If you say you can’t afford it, we’ll let you in anyway.”

If admission is affordable, the same cannot be said for participation in a show where a four-legged athlete can easily be valued at more than half a million dollars.

As with everything else in the Hamptons, lines are ineluctably drawn between haves and have-nots on the emerald green lawns of the 65-acre show grounds, hemmed by the hedges that are the area’s defining horticultural element. A horseshoe of tented pavilions faces a newly reconstructed Grand Prix Arena, with its formidable vertical jumps paid for and carrying the logos of luxury brands like NetJets and Hermès.

Ringside tables inside those pavilions sell for the week to private spectators and corporations according to a tiered price system.

The least expensive cost roughly $4,000, Mr. Suskind said, and are set near the caterer’s bar or the arena entry, well away from sightlines optimal for experiencing the adrenaline rush produced by watching a rider vault a six-foot obstacle.

The sum paid by high rollers like Michael Bloomberg, the billionaire former mayor of New York, for a table closest to those jumps is roughly $50,000. “He’s not going to pay $4,000 to watch his daughter ride,” Mr. Suskind said, referring to Georgina Bloomberg, a decorated equestrian daughter of Mr. Bloomberg. “There are certain class distinctions involved.”

That may be. Yet, while the archaic essence of most horse shows has altered little over the four decades of the Hampton Classic’s existence (its sartorial guidelines alone make the National Football League’s uniform regulations look permissive) few would dispute that class is not quite what it used to be.

Historically, horse sport was a pursuit of the landed and, in its earliest iterations, the Classic could still be counted on to draw out what remained of the clubby Hamptons summer elite. The origins of the show can be traced to the early 1900s and a genteel horse show held in Southampton as a hospital benefit. Discontinued after World War I, it was briefly revived in the 1920s and then discontinued until 1952, an on-again, off-again history that resumed when the Southampton Horse show became the Hampton Classic in 1977.

It has been some time since blue-blood members of the East End gentry — people with names like Phipps or Murray or Bouvier — dominated Hamptons society in its broadest sense. The V.I.P.s expected over this particular long weekend, said Christopher Robbins, the show’s longtime caterer, include the “Real Housewives” Ramona Singer, Jill Zarin and Luann de Lesseps, almost birthright members of a reality TV aristocracy.

Yes, Billy Joel had also been spotted watching an equitation class on family day, Mr. Robbins said. But Mr. Joel is such a low-key constant in an area he calls home (the singer lives in nearby Sag Harbor) that remarking you have seen the Piano Man is not unlike saying you once drove past the Big Duck.

What is seldom mentioned is how static the celebrity population is in Long Island’s coveted summer towns. People come to the Hamptons, it seems, and stay put. This was true of the Abstract Expressionists (many of whom — Jackson Pollock, Lee Krasner, Elaine de Kooning — stuck around permanently at the bucolic Green River Cemetery in Springs.) It was true of people like George Plimpton, James Jones and Truman Capote, the boozy “Sagg Main" set that congregated for years at Bobby Van’s.

It is still true, to judge by the number of Alec Baldwin mentions in the gossip section of Dan’s Paper, the venerable East End rag. Brooke Shields turns up routinely at the Hampton Classic, as do Christie Brinkley and Donna Karan, occasionally with Barbra Streisand in tow. Bruce Springsteen and his wife, Patti Scialfa, are regulars (their daughter, Jessica, is an Olympic equestrian), and so are Jerry and Jessica Seinfeld, Kelly Ripa, George Soros and Sting.

Notoriety seems to be short-lived here, too, to judge by the appearance of Matt Lauer, the former NBC co-anchor, at the Hampton Classic on Wednesday morning, a day of near Biblical rain. Despite having been, as Mr. Robbins said, “socially exorcised” from the Hamptons after his dismissal from NBC in 2017 amid allegations of sexual misconduct, there was Mr. Lauer grinning broadly beneath a Yankees cap as his ex-wife, Annette Roque, took photos of their 15-year-old daughter, Romy, in the show ring.

Contradictions, after all, are as essential an element of the Hamptons as sweet corn and farm stand tomatoes at $6 a pound. And the tales still told of talented but impecunious riders scrapping their way to the Classic on the back of some gifted nag discovered in a barnyard seem more than ever like myth.

“Everything about it is costly,” Kevin Babington, a leading rider said Thursday morning.

After schooling his award-winning Irish chestnut gelding, Mr. Babington dismounted in a tent set aside for top riders and handed him off to a groom. Son of the owners of a small department store in County Tipperary, Ireland, Mr. Babington expressed the same amazement a neophyte to the horse world might feel that one of humankind’s oldest pursuits has evolved into one of its costliest.

Bodily risks aside, Mr. Babington added, the sport is clearly not for the faint of heart. Consider, he said, the $4,000 monthly fees charged by some barns for boarding; the $1,500 Der Dau boots favored by many riders; an imposing list of tack-room essentials (bridles, saddles, martingales, girths, blankets, coolers, fly nets, galloping boots, spurs and crops for a start); the $300 fees required to enter certain show classes; the $100 it costs to braid a show horse’s mane and tail; and the fact that many horses require new shoeing almost as often as Sarah Jessica Parker.

There is, too, the steep price tag on the animals themselves. In the barn Mr. Babington shared this week with fellow professional riders there was more than one horse whose value exceeded $5 million.

“My kids are just starting to get into the sport,” said Mr. Babington, who recently swept the top three places at the Lake Placid Horse Show. “I asked them, ‘Couldn’t you take up tennis instead?’”

Note: On Friday afternoon, Mr. Babington would suffer serious injuries in a fall from his horse, Shorapur, at the Hampton Classic. Mr. Babington, who is 51, was airlifted by Suffolk County police to Stony Brook Hospital. Hampton Classic officials did not provide further information on his injuries or condition.