10k? 20k? Half a million? When it comes to crowds, size is everything

Melburnians tuning into ABC’s Radio National on Thursday morning might have thought they had just missed a moment – a big one – in their city’s history.

In an interview with Fran Kelly, the station’s Breakfast host, Queensland mining magnate-turned-politician Clive Palmer said 500,000 people had taken to the streets of Melbourne’s CBD for a “freedom” protest five days earlier.

If Mr Palmer’s claim about the size of the crowd that marched against the Labor government’s proposed new pandemic management laws was even close to accurate, it would have easily been the largest political demonstration the nation has seen.

But of course, it wasn’t. Not even close, although the United Australia Party chairman may have set some sort of record himself by exaggerating the numbers in the CBD on November 20 by a factor of 25, if the official police estimate is to be believed.

But the scale of the demo had already become, even before Mr Palmer spoke, the latest front in the post-pandemic battle over just what is and is not to be believed.

Telegram, the “freedom” movement’s online platform of choice, lit up in fury after The Age estimated the crowd at “more than 10,000” with demonstrators and their supporters citing the reporting as yet another “lie” by a mainstream media determined to dismiss, downplay and denigrate their cause.

Figures of 80,000, 250,000 and even 450,000 appeared before Palmer, whose office told The Age his claim was based on reports from on-the-ground members of his party and the allied Reignite Democracy Australia, scooped the pool.

The game of claim and counter-claim over crowd sizes is far from a new phenomenon. The numbers attending political demonstrations have been contested for as long as people have been gathering in public to make their points.

When tens of thousands took to the streets to protest against the Vietnam War in May 1970, The Age estimated the crowd at 70,000, while one of the leaders of the rally, Labor’s Jim Cairns, insisted there were more than 100,000.

The premier of the day Sir Henry Bolte dismissed the protest which he said might have been as small as 20,000.

“They were all of the one ilk,” Sir Henry sniffed.

The generally accepted figure of 100,000 that day is thought to be among the largest demonstrations in Melbourne’s history, up there with a protest against the industrial relations policies of Liberal premier Jeff Kennett in November 1992 which is also thought to have attracted 100,000 or more.

In more recent years, 100,000 trade unionists and their supporters were reported to have turned out for an ACTU-led march to “change the rules” on industrial relations in April 2019, while a strike and protest by school students in the CBD in September that year was claimed by organisers to have attracted 150,000, later revised down to 100,000.

But Reignite Democracy Australia, one of the key groups behind last Saturday’s protest, is confident it organised Melbourne’s biggest demo ever. 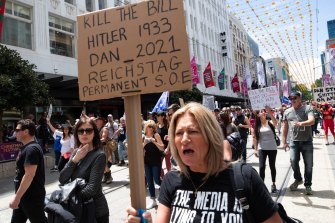 “They walked from Parliament to Flagstaff. Now, at 1:45pm, which is an hour and 45 minutes after the event started, people were still at Federation Square waiting to begin walking.”

Ms Smit, who was prevented by her bail conditions from attending the march, said the 7.2 hectare Flagstaff Gardens was not big enough to contain the entire crowd.

A few hours after Mr Palmer’s attention-grabbing intervention, Victoria Police Chief Commissioner Shane Patton told 3AW’s Neil Mitchell that the force’s estimate of the crowd numbers at the “freedom” gathering was between 10,000 and 20,000 swelling to “20,000 at one stage”.

Victoria Police has refused in recent years to release their estimates of protest numbers, until Mr Patton said on Friday that he would instruct his media unit to supply the numbers in future.

So we will have official estimates of crowd numbers for future protests but don’t expect figures from the police – who are almost as hated by the “freedom movement” as the Andrews government – to settle anything.

Mr Patton also told Mitchell that although police were “reasonably good at it”, counting crowds was not an exact science and their “guesstimations” of numbers were not perfect. 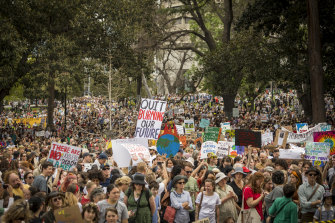 “We have broken up [the policing of the march] into sectors and those [officers] in charge of those sectors would be able to say how many in each of these,” Mr Patton said.

The force did not respond on Friday to request for more details on its crowd-counting technique.

The media has to try to get an accurate fix on numbers at demonstrations in central Melbourne either from ground level – notoriously difficult – or from vantage points in taller buildings.

Aerial observation via drone is ruled out by Civil Aviation-enforced no-fly zone above the streets, which the media observes and the protesters ignore, posting footage to YouTube and other online platforms. 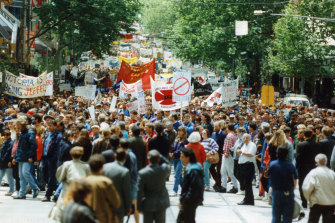 Crowd safety expert Dr Aldo Raineri, from CQ University, told The Age there was a lot of complexity in counting a large group of people and that moving crowds, most commonly seen at protests, threw up more challenges than static ones.

“It does depend very much on the type of crowd, the type of event, why they’re meeting, the space that is available for them to fit into and the movement dynamics of the crowd,” he said.

But numbers matters, according to Melbourne University lecturer Jeff Sparrow who has been studying the “freedom” movement closely, and who says its activists will be eager to use claims such as Mr Palmer’s to paint a picture of a mass-participation movement that is rapidly growing in support.

“They want to show that they represent a substantial proportion of the population,” Dr Sparrow told The Age.

“Now, every poll shows that they don’t, and vaccination rates in Victoria now are actually quite high. So we’re talking about a minority but they want to show that they can mobilise a big chunk of the population, so they’ve got an obvious interest in making those numbers as high as possible.”

Dr Sparrow says “far-right populist” movement could crumble if it failed to demonstrate it was growing in popularity.

“It’s been led by a pretty incoherent melange of disparate organisations that don’t … have very much in common and so maintaining momentum is crucial for this movement because the moment that stops, it’ll all fall apart as they start fighting with each other,” he said.

“So they need to have that sense that it’s going forward it’s onwards and upwards.” 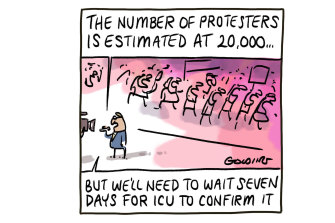 Freedom protests are planned across the country for this Saturday. Organisers say they expect to see a big turnout.