A bravura approach to autofiction pays off in Tsiolkas’ new work

He’s had enough of liberal pieties, self-righteousness, the smug certainty of the modern world. He wishes to retreat, to write unencumbered by reductive rhetoric and ugliness. His friends, however, aren’t so sure. “You can’t write about beauty,” a friend bluntly tells him. “You don’t have that talent”.

Christos Tsiolkas, subject and narrator of his own novel, isn’t so sure. He’s escaped to the coast, aiming for a digital detox and a creative renewal. He wants to write about beauty without shame or cant. He wants to write against the spirit of the age. 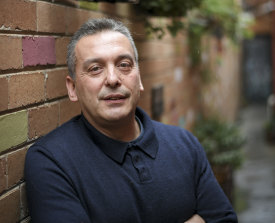 Christos Tsiolkas has taken the tired ploy of the self-referential text and reinvigorated it.Credit:Eddie Jim

So here we are: metafiction, autofiction, whichever label you care to give it. Tsiolkas’ writing has always thrived in the noise and chaos of the contemporary – the hypocrisies and double-dealing, the blood and the shit – and while in synopsis his new novel threatens to descend into navel-gazing, 7 ½ (the Fellini echo entirely intentional) is as urgent and desperate as anything he’s written.

Risking narcissism and challenging his own creative practice, he’s found a way to embrace the irresolvable without clean lines and neat conclusions.

He has also created a novel that lies waiting for misunderstandings and misreadings. For one thing, Tsiolkas the character is almost a parody of his provocateur self. His opinions are sweeping, half-true, self-consciously oracular: “Our literature of the last half-century has been the babblings from the university … Your generation wishes to bind beauty to a new god named Justice. That fantasy too cannot last.”

As a writer, he wishes to escape the summary judgements of the social media culture, but as a character, he is drawn inexorably to comparable statements. And when his prose at regular intervals takes in his surroundings, it aims for an unashamed lyricism, but the effect is mixed – at times evocative, at others almost gauzy and purple, more a parody of fine writing and far removed from Tsiolkas’ blunt power.

How sincerely are we meant to take the book? Are we witness to a losing struggle for sincere beauty, or the realisation of an artistic aim?

“I am not ashamed to love the beautiful,” Tsiolkas writes, late in the book. He knows how hard it is to write such a line – as character or author – without irony or rationalisation, but for much of the book, away from evocations of landscape and conversational agitprop, he achieves it.

As in previous novels, he is an overwhelming writer of the physical and lustful. The memories of family members and youthful hook-ups that pepper the book’s first half are evoked with simultaneous tenderness and grit – full of scent, touch, the fundamentals of living.

And then there’s the book within the book, the novel Tsiolkas the character has come to the coast to write: Sweet Thing. Gradually overtaking the second half of the novel, it’s a story of family, shame and regret. Paul Carrigan, a retired gay porn star and now married father living in Australia, is offered an impossible-to-refuse sum of money for one last job. As with so many other moments in the novel, Tsiolkas through this nested narrative dares us to accept a story of both tenderness and brutality without suspicion, at times risking near-sentimentality. Is this the work of art or an abandoned effort apologising for itself within a more contested narrative?

Added to these numerous voices and modes are other digressions – moments of musical consideration, a page here or there on Manet, reflections on Dante, Jacques Demy, sexuality in modern cinema. If it intrigues him, it stays. The sensibility reflects the work: capacious and refusing to limit its field of inquiry. Tsiolkas’ engagement with Dante as both subject and inspiration is typical of the book’s curious art, forever on the edge of embarrassment yet somehow, in the end, alighting on grace.

To say it’s messy, or occasionally misguided, seems a small cavil in the face of such wilful ambition. Tsiolkas hasn’t simply written a lyrical book in defiance of what he deems our unlyrical moment – in 7 ½ he’s taken the tired ploy of the self-referential text and reinvigorated it, moving beyond mere authorial reflection to touch upon something, ironically enough, universal. As a novel unafraid to be warped and rewoven by struggle and doubt, it’s captivating stuff.