A hidden collection revealed: what the industrialist left behind

A little over a year ago I was in Turin for the announcement of one of the most remarkable private bequests ever handed to a museum of contemporary art. Francesco Federico Cerruti, a local industrialist who made his fortune from the perfect binding process that allowed the spines of books to be glued instead of stitched, had died at the age of 93 and left everything to the Castello di Rivoli.

This came as a shock because Cerruti had been the most private of men. He never worked anywhere but in the family firm, had never married, and lived like a monk in a small, nondescript apartment above his factory. There was, however, another Cerruti: a passionate art collector, a man who loved books, orchids and dogs. He is believed to have made his first purchase in 1969, when he acquired an abstract watercolour by Wassily Kandinsky. Not many collectors could lay claim to such an auspicious start.

By the time of his death in 2015, Cerruti had amassed more than 300 items, including paintings and sculpture, rare books, furniture, ceramics and carpets. What was most astonishing was the range of the collection, which began with religious paintings by early Renaissance masters such as Agnolo Gaddi and Sassetta, and ended with works by Andy Warhol and Guilio Paolini. The last painting Cerruti acquired was an 1897 portrait of a young woman by Renoir. 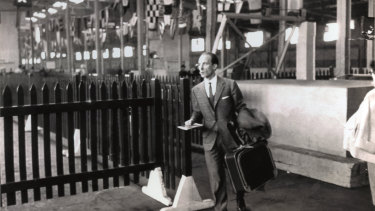 The collection was housed in a villa he had built on the outskirts of the city in the 1960s, as a home for his parents. As it happened, they never lived in the house, and so it became the collector’s treasure trove. He would drive out for Sunday lunch but spent the rest of his week in the city. The house is located on a hill only a kilometre from the Castello di Rivoli.

Although Cerruti’s tastes may have been eclectic he had a deep concern for quality. As the collection grew, so too did his knowledge of art history, and his connoisseurship. The final inventory includes old master works by Pontormo, Domenichino, Paris Bordone, Francesco Francia, Dosso Dossi, and Jusepe de Ribera. Among the moderns there are pieces by Picasso, Modligliani, Cézanne, Klee, Leger, Miró, Ernst, Magritte, Schiele, Bacon, Giacometti and Dubuffet.

All the major figures in modern Italian art are represented, from the Macchiaioli to Balla, Severini, Boccioni, Morandi, Fontana, Casorati, Martini, Marini, Campigli, Sironi, Manzoni, Burri and Vedova. Giorgio de Chirico was a particular favourite, with no fewer than 10 paintings and drawings.

This list is by no means exhaustive, but you get the idea. By contrast, the permanent collection of the Castello di Rivoli is made up of works from the 1960s onwards, with an emphasis on the Arte Povera movement that originated in Turin in the 1960s. 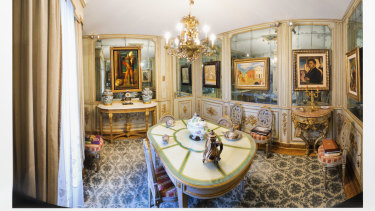 Inside Cerruti’s villa, which he visited for Sunday lunch to see his collection, preferring to live above his factory.

While the Castello’s director, Carolyn Christov-Bakargiev, diid not hesitate to accept Cerruti’s fabulous gift, she has had to find ways to honour the benefactor and make best use of his holdings. It has meant rethinking the museum’s priorities to include a much broader historical dimension. But as the building itself dates from the 9th- 10th century, and has been renovated many times by the nobles of Savoy, history has always had a strong presence. There can’t be many museums of contemporary art on the UNESCO World Heritage list.

The first gambit was an exhibition of last year that put eight of Cerruti’s de Chiricos alongside works by Arte Povera artists in rooms decorated in the 18th century. This year those rooms contain works by contemporary artists, Anna Boghiguian, Camille Henrot, Liu Ding, Giulio Paolini, Giuseppe Penone, Susan Philipsz and Seth Price, who were invited to respond to aspects of the Cerruti Collection.

Yet the main attraction last week was Cerruti’s villa, which has been renovated and opened to the public, who will be able to visit in small guided tours. The busy arrangement of works follows Cerruti’s own schema, providing an insight into the collector’s way of thinking. We see the dialogue between pieces he set in place, in which a Renaissance Madonna might sit alongside a modernist painting, as if it were necessary to constantly balance out the sacred and the secular. In one bedroom a Madonna and child by a follower of Leonardo is flanked by the Futurists and the Surrealists. 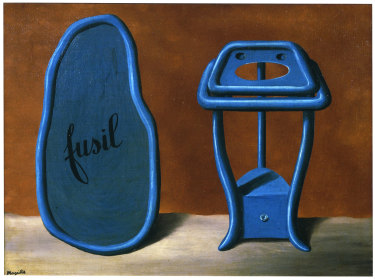 The de Chiricos are hung on mirrored glass in a dining room decorated in 18th century style. A bright red abstraction by Lucio Fontana is placed in an incongruous gold frame, lending it a weirdly classical dimension.

Sometimes it’s not even the art that springs surprises. Even though the villa was built in the 1960s many rooms are decorated in Louis XVI or Provencal style. The building has an impressive wine cellar, although Cerruti didn’t drink. It has a billiard table, covered in rare books, but he didn’t play billiards. There is a perfect Provençal kitchen, but the gas and water were never connected. It’s the house of a man who lived life at one remove, adding details that echoed whatever he believed to be conventional taste. It’s as if a Martian tried to design the kind of house that would be acceptable to wealthy earthlings. 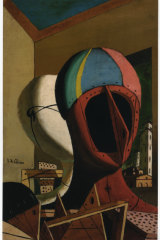 There are also many points of hidden self-identification – in a portrait by Pontormo of a tall thin man holding a book, and in numerous images of St. Jerome – the patron saint of scholars, librarians and translators, but also a famous hermit.

Perhaps the most poignant space is a wood-panelled bedroom at the top of the house, crammed with religious works from the early Renaissance. This was the room in which Cerruti had chosen to breathe his last, although he would eventually die in hospital. It would have been the final devotional act of a collector towards his collection – a body of work that could no longer be separated from Cerruti’s religious beliefs or his reclusiveness.

Visiting this house one can see how Cerruti, in his solitude, fashioned a kind of alternative universe from his art collection. The works not only stimulated his imagination, they were the best form of company. The villa emerges as a mirror of the collector’s mind in which the imprint of a personality has achieved its victory over death.