Frozen the Musical ★★★★
Her Majesty’s Theatre, from July 14

Disney’s Frozen musical was scheduled to open in Melbourne last month. The latest lockdown put those plans on ice until Wednesday, and it was hard not to feel a mix of emotions at the revised opening night. 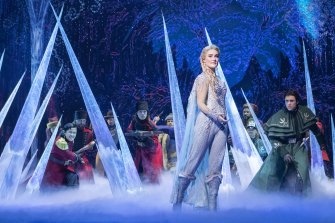 Jemma Rix stars in the Australian production of Frozen.Credit:Lisa Tomasetti

Excitement was tinged with anxiety. There was the crowd’s palpable delight at witnessing a thaw in Melbourne’s deep freeze on commercial musicals, but apprehension, too, as spillover from the current NSW outbreak continues to spread – the virus exploiting a glacially slow vaccination rollout to threaten renewed disruption.

Still, Disney does not do musical theatre by halves. With deep pockets, its pick of Australian talent and world-class design, the titan of animated film has adapted a slew of glossy and transporting musical fantasies – from the stampeding wildebeests and ground-breaking puppetry of The Lion King to Aladdin with its genies and flying carpets – to the stage.

The cares of the world do tend to slip away in the presence of its live shows; Frozen is no exception. Stellar production values drape this production in visual splendour, with elaborate costuming and set design, projections, special effects, stage magic and puppetry all playing a role in bringing the winter wonderland to life.

It might have seemed like excessive ornamentation were it not for the vibrant (and virtually flawless) performance from the ensemble, filling the stage with precisely co-ordinated colour and movement and song at all the right moments.

In particular, the use of group choreography invests the show with the dynamic humour of a live action cartoon, animating everything from a royal waltz to a thigh-slapping Norwegian parody song performed in nude suits.

If the latter sounds a bit risque for Disney, the show does feel attuned to the cohort of kids – now tweens or young teenagers – who were enchanted by the film on release.

It still has cutesy edges, such as talking snowman Olaf (thanks to characterful puppeteering by Matt Lee) singing an ode to summertime, but mostly it’s a tale focused of two sisters coming of age.

To that end, the juvenile leads are fabulous (young Anna was played by Stella Partridge, young Elsa by Isobel Lauber on opening night), as they set up an irresistible sisterly bond for the adults – Jemma Rix as Princess Elsa, Courtney Monsma as Princess Anna – to step into. Nor do Monsma and Rix disappoint, with cut glass vocals and big notes galore.

The men play second fiddle, of course. Sean Sinclair’s unlikely love interest, lowly ice-seller Kristoff, is suitably understated and offbeat; while Thomas McGuane has dark glamour as the inverted Prince Charming-turned-villain – at least until expositional haste in the second act over-compresses the story’s revelations and resolution.

That is a small issue compared to relative weakness of the music which, notwithstanding the showstopper Let It Go, fails to do as much dramatic work or carry as much emotion as it should. There are vocally impressive set-pieces, but little in the score that might melt an icy heart, and that could be why Frozen fails to develop into quite as appealing and fully fleshed a female buddy story as, say, Wicked does.

Not that it will matter to the target audience. Frozen is a lustrous musical spectacular that will dazzle and entertain fans of the film.