A mother has revealed she’s losing patience with fathers who bring their daughters into the female changing rooms at her child’s school.

Taking to the British parenting forum Mumsnet, the mother explained that men are regularly using the female changing rooms after their daughters have been swimimng at the school pool.

She was left baffled at the number of fathers ignoring the separate changing room system and revealed that when asked to leave, most argued that they had nowhere else to take their daughters and that the boys’ changing room was not an option.

She said: ‘Am I being precious or should I ask them to use the men’s? Their attitude is that it’s their daughters who are getting changed, so they can’t take them into the male side with all the boys!’

Overwhelmingly, viewers of the post agreed that men shouldn’t ever be entering female changing rooms, with some blaming the school for not setting up an appropriate system for parents.

However, a few pointed out that it’s a tricky situation to resolve because the dads will then have to take their daughters to change in front of men in the other area. 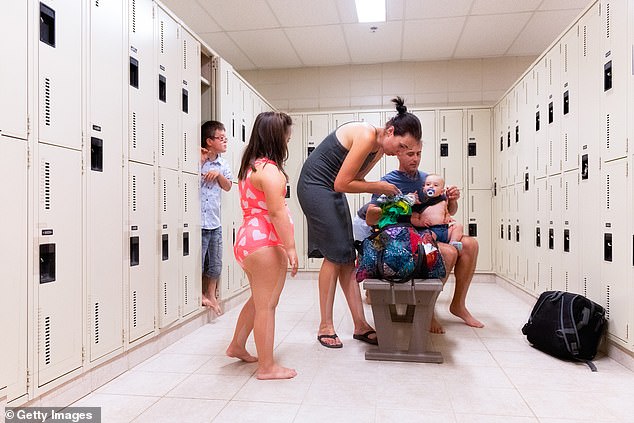 Explaining that her daughter feels uncomfortable the woman said she’s getting ‘increasingly annoyed at the number of men in the female changing rooms’.

She explained that there’s a ‘tiny swimming pool attached to a school with two small changing rooms, clearly marked male and female’.

‘Every week there are at least one or two men who insist on bringing their daughters (all under 7) into the female side to change before and after lessons,’ she said. ‘It’s just one open space, no cubicles or individual spaces, and mydaughter, nine, is getting more and more anxious having to change in front of these full grown men.

‘There are no naked adults, it is only children getting changed. Some are quite young, probably none quite old enough to change independently.’

The woman revealed that no parents are allowed poolside and that teachers wait to meet the children on the other side of the changing rooms so a male or female changing room must be chosen.

‘But there are only a few boys changing in there, all under 7, and no naked adults.’

‘I take my (young) son into the female changing room and agreed with my husband that as he gets older we’ll both have to take them. Husband and son in the men’s, me and daughter in the women’s.

‘I’ve already emailed the swim school to ask what the policy is and to email parents to make them aware, plus improve signage.’ 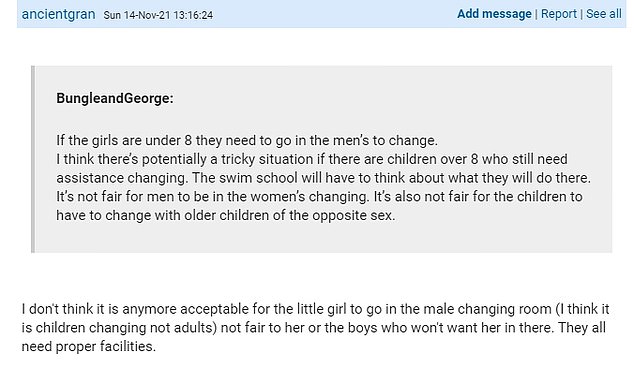 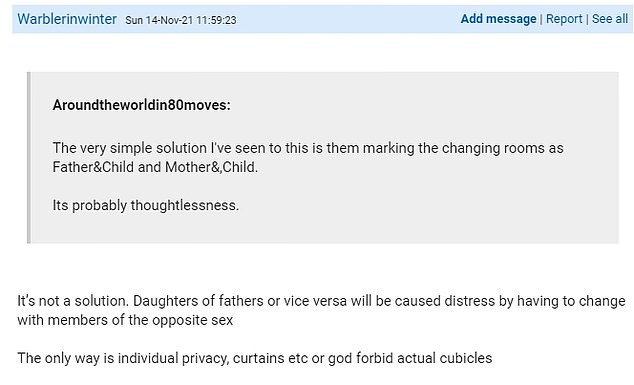 Commenters came out in their masses to reveal that they would also feel uncomfortable.

‘I’m amazed you put up with this once. They need to leave immediately and (depending on their behaviour) I’d seriously consider reporting them to the police,’ one wrote.

Another person said, ‘Not acceptable at all, and evidences the fact that men often don’t understand the effect of their actions when it comes to women and girls. I would speak up if you’re brave enough. Perhaps an email to the management is the way to go, then you’ll have evidence of what they say. It’ll make it more difficult for them to fob you off.’

Another commenter agreed, saying:’ Complain to the Centre (and keep complaining until they do something). Funny isn’t it – they don’t want their daughters exposed somehow to other men, but don’t give a s**t about yours or the other women in there.’

A third piped up with, ‘If the child can’t dress independently they should go into the changing room of the parent they’re with… in this example the gents. But really there should be family changing rooms.’

Some people, however, while agreeing with the idea of separation thought that it was the school’s responsibility, not the fault of the fathers themselves.

One person said, ‘Children are getting changed and adults are fully clothed. Your point is that your daughter is upset that there are adult men in the changing room with her, but if the dad takes his daughter into the mens then she is getting changed in front of adult men and teenage boys. No easy solution to this when the child is too young to change themselves and the changing rooms are communal.’

Another said: ‘I can absolutely see your point, but somehow a young girl getting changed in front of a bunch of grown men doesn’t seem right either.’