Albanese looks to Indonesia, India to diversify Australia’s economy away from China

Prime Minister Anthony Albanese says Australia must diversify its trade and economic interests away from China and build up links with countries including Indonesia and India.

On the final day of his three-day trip to Indonesia, Albanese also spoke to students at the Universitas Hasanuddin in Makassar, the capital of the eastern island of Sulawesi, about climate change, education and his appointment of the first Muslim Australians in a federal ministry – Ed Husic and Anne Aly. 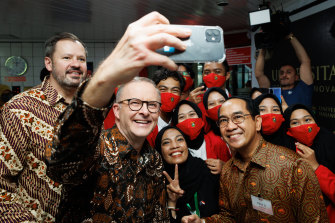 Albanese has focused heavily on trade and investment links with Indonesia during the visit, bringing with him a high-powered delegation of chief executives from Australia’s largest companies including Commonwealth Bank, Wesfarmers, Telstra and Fortescue, and emphasising in a speech at a business dinner in Jakarta on Monday night the need for trade diversification.

It was a theme he returned to on Tuesday as he revealed former Rudd and Gillard minister Greg Combet would lead a delegation of industry super fund chiefs to Indonesia in the coming weeks to look for new investment opportunities.

“We will continue to work on trade diversification. It’s important … because at one stage the trade proportion with China was up around 45 per cent … we need to make sure we diversify the opportunities which are there … Indonesia is obviously a very important element in that,” he said.

“Indonesia will grow to be one of the top five economies in the world in coming years.”

Albanese said India and Indonesia both offered enormous opportunities to Australia because of their significant economic growth.

He noted Indonesia was 13th on the list of Australia’s trading partners, saying it should be “much higher”. “Common sense tells you that should be the case.”

China has levelled punitive tariffs and de facto bans on about $20 billion of Australian goods including beef, barley, wine, coal and even lobsters in recent years.

The prime minister said those trade sanctions were “unjust and should be removed”.

He said his visit to Makassar was a signal his government was taking the relationship with Indonesia seriously, as was the business community.

“I think for a lot of Indonesians, they know that Australia knows about Jakarta and knows about Bali. What they want is an Australian government that understands this vast archipelago and this vast nation.”

At the business dinner on Monday evening, CBA chief executive Matt Comyn said the lending institution, which has had a presence in Indonesia for 25 years, wanted to support Australian businesses looking to develop closer economic ties with Indonesia.

“It’s a very large market, it’s a huge population with a good growth profile and for Australian business, it’s definitely a market they should be considering,” he said.

Wesfarmers boss Rob Scott, also part of the delegation, said the company had multiple relationships in Indonesia as it worked to diversify the sourcing of products for its businesses including Kmart and Target.

“Indonesia is becoming an important market,” he said.

Husic, who joined Albanese on the trip, was applauded by the students as the prime minister said his Industry Minister and Aly had support across the Australian community.

“I take this as really heartening confirmation that we are maturing as a nation,” Albanese said.