It’s a tradition that dates back to women being considered property, chattels to be passed on from father to husband. Yet it remains the norm: about 80 per cent of women in Australia take their husband’s name when they marry.

Even high-profile women whose names are almost brands think along these lines. When Kylie Minogue was set to wed she said she would change her name; likewise international human rights lawyer Amal Alamuddin, who is far better known as Amal Clooney since her marriage to George. 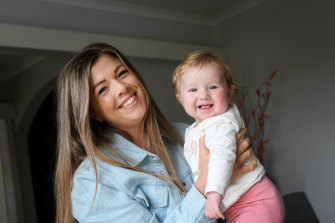 Rachel Caldwell didn’t want to change her name when she got married, but she is glad she did now that she has her daughter, Seren.Credit:Justin McManus

“Why did this empowered, intelligent, extraordinary woman change her name?” asks Dr Tania Penovic, a senior lecturer in law at Monash University, specialist in women’s rights and research program leader in gender and sexuality for the Castan Centre for Human Rights Law.

Penovic did not change hers. “When I got married I felt very much that my parents had migrated a long way from their home country so my surname was an intrinsic part of who they are. Obviously, the whole practice of adopting the father’s [and not the mother’s] surname is also patriarchal, but it seemed to me irrational to give up that whole history and identity to take on a name from another time and place just by dint of marriage.”

Albury-based marriage celebrant Sharon Milsome conducts between 60 and 70 ceremonies a year and has done so for a decade. In her experience, there are two impetuses for a name change, both revolving around children. “There’s a rush on before schools and a rush on before they have babies. The name seems to be very important to a lot of people.” 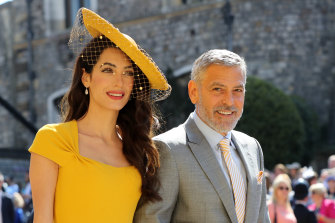 Amal Clooney changed her name when she married George.Credit:PA

Those who don’t make the switch tend to work in fields in which their names are prominent, such as doctors and teachers, she says.

Responses from women canvassed brought out other motivations. Some said it was symbolic of new beginnings, creating a new family unit; some that it was a formal reflection of their love. Others said it was less about symbolism and more about aesthetics: they simply liked the sound of their husband’s name more than their own. Trauma or estrangement from the family of origin was also cited as influential.

Rachel Chivers married three years ago, when she became Rachel Caldwell. She and her husband consider themselves equals, not traditional. “Previously, I was quite opposed to it,” she said. “I liked my surname, especially because I am over the other side of the world from my family – they are all in the UK – so it was a tie back to my family … but then I guess peer pressure, societal pressure, family pressure … Our parents are a bit more traditional and it might have seemed strange or disrespectful to my husband’s family side if I wasn’t to take on their surname.”

She suggested hyphenating their names, but that raised a dilemma about which would go first – and they considered “making up a whole new surname”. In the end, Caldwell says, “I accepted defeat and backed down”. Now that the couple has a daughter, she is glad they share the same last name. “It has made it all a lot easier, it would have demanded a whole new conversation about whose name she would take.”

Stephanie Szalinski, nee Trodd, was married in March last year; she always intended to change her name. “I wanted to have the same name as my husband. I knew my children would have that name and, for me, that’s part of being a family.”

On reflection, she sees it as an outdated idea, in the vein of men asking fathers for permission to marry their daughters. “It is quite caveman when you overthink it: ‘You are my wife and you will take my name’.”

Penovic agrees that it’s anachronistic and feeds into power structures. “It’s seemingly insignificant, but it’s one small cog in a very large wheel. Culture is not fixed, but cultural change takes incremental steps. If women were to routinely keep their names when they got married, that would not dismantle other patriarchal structures, but it’s one small step in chipping away at the edifice.”

In need of some good news?

Stories that will brighten your outlook, delivered weekly to your inbox. Sign up for our Greater Good newsletter here.