Sydney artist Tony Costa has been named winner of this year's Archibald Prize at the Art Gallery of NSW for a portrait of Lindy Lee. 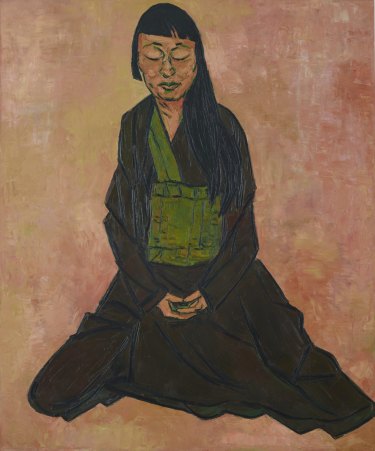 The president of the board of trustees, David Gonski, announced the winning portrait from among 51 finalists, of which 11 were self-portraits, 17 of fellow artists and 12 paintings of identities from across the art world including acting, media and dance.

Highly commended was Jude Rae for her portrait of actor Sarah Peirse as Miss Docker in Patrick White's play A Cheery Soul.

Indigenous artist Sylvia Ken took out the $50,000 Wynne Prize for landscape painting or figure sculpture – and the $40,000 Sulman Prize for subject, genre or mural, went to Sydney artist Maclean Edwards.

The public exhibition of finalists in the Archibald, Wynne and Sulman Prizes will open on Saturday and tour regional NSW and Victorian galleries from September.

Costa's portrait captures Australian painter and sculpture Lindy Lee who is renowned for her work which blends the cultures of Australia and China as well as exploring her Buddhist faith.

It's the first Archibald winning portrait to feature an Asian Australian sitter in the 98 year history of the prize. Costa, whose studio is in Strathfield, completed the portrait in two days late last year. He first came across Lindy Lee's ideas at a talk she gave at the Art Gallery and was attracted by her wisdom, humility, courage and humour.

Costa has been a finalist in the Archibald Prize in 2015, 2017 and 2018 and has been represented in the Wynne Prize, the Sulman Prize and the Dobell Prize for drawing.