At Home With Valeria Napoleone, the Art Collector Who Puts Ladies First

At home with the collector who focuses exclusively on female artists. 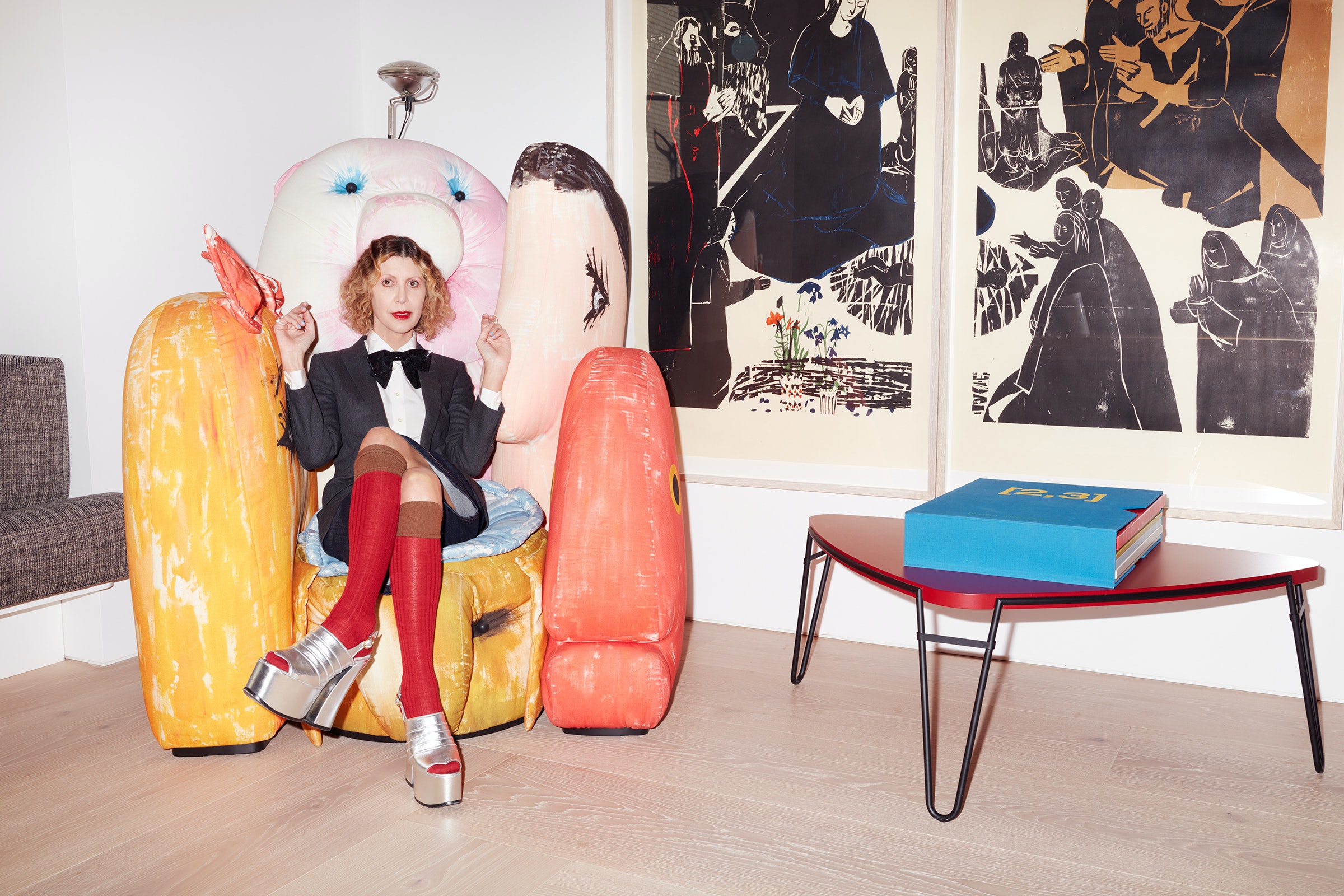 It took Valeria Napoleone “nine years of nightmare” to gut and rebuild her Victorian terrace house in the Kensington district of London. Six of those years were spent winning permits and fighting legal battles. At times, the uphill struggle seemed foolhardy, but Napoleone regarded her mission as more than a personal one: It was for contemporary women artists. She was securing the ideal home for her unparalleled collection of their work.

The daughter of a plastics-and-resins industrialist from Lombardy and the wife of an Italian-born financier, Napoleone grew up in a small town outside of Milan. She began collecting art in her late 20s, when she lived in New York. After graduating with a degree in journalism from New York University in 1990, she returned to the city four years later, by this time married, and enrolled in a two-year master’s course in gallery administration at the Fashion Institute of Technology. “Seeing a lot of incredible women artists, I was really excited about them,” she said. “I’m a feminist. I didn’t know anybody who was focusing on female artists, but my collecting them was not a strategy. It occurred organically because I was excited about the art.”

Napoleone bubbles with enthusiasm. When I met her in New York last spring, at her recently acquired, still devoid of artwork full-floor apartment in a building designed by Robert A.M. Stern, she was wearing a plum-colored Issey Miyake blouse; custom-tailored, leopard skin–patterned, scallop-edged pants; white Prada flats with metal studs and perforations; and a silver Nike baseball cap. I expressed admiration for her clothing, and she beamed. “I love to dress up,” she said.

She was even more ebullient a few weeks later, when she hosted me on a Zoom tour of her primary residence, in London. It has seven floors, one of them excavated below grade. (That required additional time and fees for both lawyers and engineers.) Not only is there art everywhere, but some of the decor was created by artists. The entryway door, with its red handle and frosted glass, is the work of Nathalie Du Pasquier, an artist and designer who was a founding member of the Memphis Group. (A hanging light fixture from the ’80s and a painted rectangle on the floor are also by her.) The niches alongside the grand staircase—its steps fashioned from pietra serena, a gray sandstone that was used in Renaissance Florence—came at the suggestion of the conceptual artist Mika Tajima. “Valeria wanted to have a view of something at every point of the house,” Tajima said. Because people might bump against the walls of the stairs, Napoleone planned to limit art to the landings, until Tajima raised the notion of placing pieces in alcoves. “Why wouldn’t you be able to experience art as you climb the stairs?” she asked. Napoleone replied, “I’m going to tell the architect to change the plans immediately!” As Tajima remarked, “It’s not about practicality; it’s about the end result for the art.”

Napoleone and her husband have three children: a son, 21, who is studying at NYU, and 18-year-old twins—a boy, who has just started at NYU, and a girl, who has Down syndrome and attends day school while living at home in London. All of them participate—at the very least, as spectators—in Valeria’s journey. “Sometimes my husband used to say, ‘I don’t see what you see in these artists,’ ” Napoleone recalled. “I told him, ‘When you live with art, you make a connection over time.’ He has been incredibly supportive about how exciting it is for me to build something.”

Some of the pieces Napoleone buys are abstract and uncontroversial, but others are edgier, such as Birth of the Universe, by Judith Bernstein, which is painted in fluorescent colors on a huge piece of unstretched canvas. “This is a penis elephant,” Napoleone said, showing me the work. “And this is a giant vagina—very angry.” As the gallerist Francesca Kaufmann of Kaufmann Repetto remarked, “Not all the people who come to the house are art people. And the kids—let’s think of the friends of the kids. It is a commitment for everyone to have a mother who is devoted to women artists.”

A lamp by Achille Castiglioni for Flos is flanked by Judith Bernstein’s Birth of the Universe #33, 2014, and Nicole Eisenman’s Saggy Titties, 2007.

Napoleone has developed friendships with Yuskavage and many of the artists she collects. “I grew up with a family interested in antiques from the 1500s and 1600s—objects, tapestries, cabinets, carpets,” she said. “I think that was key for training my eye to appreciate really beautiful things.” But of course, a collector of antiques never gets to know the creators. “Meeting the artist is such an insight,” Napoleone said. “You have the opportunity to engage in a conversation.”

Lubaina Himid, Her Prints on Me, 2017, alongside a Mario Bellini for Cassina chair and Gaetano Pesce vases.

She prefers to buy work from artists for whom that support will make a difference. “I started out collecting young artists or artists of my generation, and artists who were overlooked,” she explained. At first, she limited her expenditure to $40,000 for a work. It is now about twice that amount, which is still a relatively small sum in today’s overheated art market. “I don’t want to navigate fashions or trends or speculation,” she said. Her collection has grown to comprise about 450 pieces. There are a few artists who are represented in depth (Rebecca Morris, Lily van der Stokker, Monika Baer, Haegue Yang), but otherwise, it’s wide-ranging. Recently, Napoleone has shifted more of her attention to midcareer artists. “Ideally, I want my artists to be in the art history books,” she said.

Unusually for a collector of her scope, she buys without the help of an art consultant. “This has been a personal journey of discovery,” she said, adding that she trusts her instincts, which generate a physical response. The first time she recalls that happening was in 1997, when she happened upon a group show in a SoHo gallery. A painting by the Italian artist Margherita Manzelli, of a wide-eyed young woman in underpants, arrested her attention. “As a collector, you know how to read your own reaction in front of a piece,” she said. “Your heart beats. Then I read, I wait, to make sure it is not a fast flame.” She could not get the Manzelli painting out of her mind. “After six months, it still bugged me,” she recalled. When she returned to the gallery, she learned that the picture had been sold—but also that Manzelli was opening a new show in London. She bought a Manzelli painting, and her career as a collector was off and running.

Along with getting behind underrecognized artists, Napoleone backs fledgling galleries and institutions. “In the last few years, Valeria has been showing me great young artists that I wouldn’t have looked at because I no longer have the time, as my gallery has gotten bigger,” said Kaufmann, who has spaces in New York and Milan. “I should be the one who tells Valeria what to look at. It’s my job. But she discovers artists through tiny nonprofit organizations. Our world is becoming so corporate that there is no space for smaller galleries. This is why Valeria is so important.”

In London, Napoleone is a longtime supporter of Studio Voltaire, an experimental arts organization located in a former chapel on the South Bank. She discovered it serendipitously about 15 years ago, while she was in the neighborhood. “Nobody knew about Studio Voltaire,” she said. “I took my friends there. For many years, my birthday party was in their garden.” As chair of the development committee for the past decade, she has funded and overseen a recent expansion that repaired the roof, created a restaurant and lecture area, and more than doubled the studio spaces available to artists at low rents.

As much as she is a fundraiser, Napoleone is also a matchmaker, bringing together people who would otherwise not meet. She showed me her dining room, featuring a Tajima “portrait” of her that was woven on a jacquard loom from a spectrogram image of the sound of her voice. The space is elegant, but too small for the eight to 10 dinners she hosts each year in her public rooms, for between 70 and 120 guests. She so enjoys entertaining that she published a cookbook, Valeria Napoleone’s Catalogue of Exquisite Recipes, illustrated with works of the artists she collects.

“In 2015, I started thinking about how I could step things up in representing women artists in order to be more impactful,” she said. “I created this initiative called XX, which stands for the female chromosome, but also for partnership.” The project has found several outlets. When Napoleone was asked by the Contemporary Art Society to become a trustee, she agreed on the condition that the institution donate a work by a woman annually to a regional British museum. Napoleone is also a trustee of the Institute of Fine Arts at NYU. “We need critical analysis and writing on women artists,” she said, adding that eventually she would like to leave the bulk of her collection to an educational institution. She has also bankrolled a program at SculptureCenter, a highly regarded but underfunded group based in Long Island City, New York, to commission new works by women. “It’s very unique to have someone who wants to support artistic production,” said Kyle Dancewicz, interim director of SculptureCenter. “She makes us visible.” Anthea Hamilton, the first artist for whom Napoleone advocated there, was nominated for the Turner Prize shortly thereafter.

Napoleone introduced Hamilton to the eminent designer Gaetano Pesce, who is her longtime friend. “She never dared connect with him, even though she admired him very much,” Napoleone said. An imposing Pesce armchair, Gli Amici (The Friends), has a place of honor in the ground-floor studio of Napoleone’s London house. “There is an elephant here, a pig on the back, a human, and a fish on the side,” Napoleone said, circling the plush chair. The piece Hamilton did for SculptureCenter was based on an unrealized project by Pesce: a doorway for a New York building that you enter by passing beneath enormous buttocks.

Napoleone with Judith Bernstein, Birth of the Universe #33, 2014.

When Napoleone began collecting, she was singular, and her project remains highly unusual. “She is one of a kind,” Kaufmann said. “There have been a few more collectors who focus only on women, but they all came after Valeria. When she started, women artists had no voice, and there was zero interest.” In the nearly quarter-century since, her passion hasn’t slackened. “This is my journey,” Napoleone told me. “I have friends who are collectors, but they are part-time. I am 24/7. I dream about my collection at night.”