Australia has been left with a hot mess budget

The only mystery about the secret spendathon in the latest budget update is when Scott Morrison and Josh Frydenberg will unveil the big ideas they hope can win them the next election.

Their decisions have been taken and are worth up to $16 billion but will stay hidden while the Prime Minister and Treasurer keep Labor and the voters guessing. The obvious option is to race to the polls as early as March if the conditions look right. 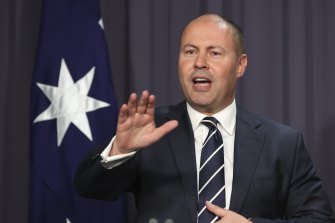 Treasurer Josh Frydenberg has a spring in his step thanks to new jobs figures which show an astonishing 360,000 jobs created in November.Credit:Alex Ellinghausen

The entire budget is founded on the assumption of a bright future. Frydenberg, ebullient as usual, would not countenance any threat from the latest strain of the coronavirus.

“We’re not going to see Omicron derail the recovery,” he said on Thursday.

The latest jobs numbers seem to justify that confidence, with an astonishing 360,000 jobs created in November when economists were tipping 200,000 and Treasury said the same. It could be a long time before Australia sees a single month like that again.

The Australian economy is bigger than it was before the pandemic and the country has 180,000 more people in work than before the pandemic. This is a strong foundation for the Coalition at the election but it comes with a downside: lower real wages this financial year.

With inflation on the rise, Labor treasury spokesman Jim Chalmers can go to the campaign telling households their incomes are falling. The forecasts actually show real growth after July next year, as well as enviably low unemployment, but that is the world after the election. Chalmers will want people to vote on today’s reality rather than tomorrow’s promise.

The forecasts will be out, of course. The budget is hostage to a virus that mutates faster than a Treasury spreadsheet. So the mid-year fiscal and economic outlook released on Thursday suffers from the recurring problem of Australian budgets: banking the promise of better times ahead.

The update assumes an incredible boost to tax revenue worth $106 billion over four years in a “parameter variation” that happens without any decisions. But the government spends $58 billion of this in “parameter variations” to existing settings. Then it spends another $48 billion in hard decisions to allocate real money. This is why the budget deficits are barely any different.

The $16 billion in “decisions taken but not yet announced” makes up some of that $48 billion and the government says the money includes essential items like vaccine boosters for the years ahead. Even so, the government is spending all the gains from the recovery when that recovery is a theory, not a fact.

The $26 billion increase in the cost of the National Disability Insurance Scheme over four years is a sign of real pressure on the budget but neither side of politics will be honest with voters about this before the election. And the budget update does not even include the $7.5 billion cost of another year of the low and middle income tax offset, or LMITO, for millions of workers.

Sooner or later some restraint will have to return.

The Coalition keeps moving the goalposts on when that moment will come. It used to say that increases in revenue would be “banked as an improvement to the budget bottom line” but abandoned this when it used the promise of future revenue gains to pay for legislated tax cuts.

Frydenberg’s new rule is to embark on fiscal repair when unemployment has a “four in front of it” – something the budget update confirms with the jobless rate falling to 4.25 per cent for three consecutive years. Yet there is no repair to be seen.

Australia is left with a hot mess budget: alluring and dishevelled all at once. Shiny new forecasts on the outside, a structural drama within.

Voters can only hope that Australia rebounds as promised. If it does, of course, the spending cuts will have to follow. When? Probably in the next mid-year budget update, one year from now. That will be safely after the ballots are cast.