President Joe Biden has declared that Texas is experiencing a major disaster, as residents continue to grapple with the aftermath of a catastrophic winter storm that hit the central and southern U.S. earlier this week.

As of Saturday morning, food and safe drinking water was in sort supply for millions of Texans.

With the major disaster declaration, people in 77 of Texas’ 254 counties will be eligible for federal funding to help with recovery efforts. The assistance includes grants for temporary housing and home repairs, as well as “low-cost loans” to cover uninsured property losses, the White House said Saturday in a statement.

The federal assistance can also be used for programs that will help individuals and business owners recover from the winter storm.

If needed, the White House said additional designations may be determined at a later date.

Mr. Biden tweeted on Thursday that he’ll “work relentlessly” to get Texas what it needs to deal with the aftermath of the storm.

Tonight, I called Governor Greg Abbott to discuss the ongoing situation in Texas and identify ways we can support the state’s recovery from this storm. I made clear to the Governor that I’ll work relentlessly to get his state what they need. pic.twitter.com/UBwH8DMep2

Mr. Biden has also said he plans to visit the state once it is safe to do so without interfering with disaster response.

Texas has seen almost a week of freezing temperatures. The deep freeze impact of the storm that entered the area last Sunday put a devastating strain on the state’s infrastructure, causing blackouts and pipes to burst.

The top official at Texas’ power grid said the system was “seconds and minutes” away from leaving residents without power for months when the storm hit. On Friday, operators said the electrical system was back to normal. But even still, many in the state are struggling to recover.

As of Saturday morning, 7 million people — roughly a quarter of the entire state’s population — remained under a boil water advisory, limiting their access to safe water.

Many of the roughly 29 million residents who reside in the state are in critical need of supplies. CBS News’ Omar Villafranca reported that at just one distribution site in Houston, 13,000 cases of water were given out. In Dallas this weekend,  25,000 meal kits are ready to be delivered to people in need. 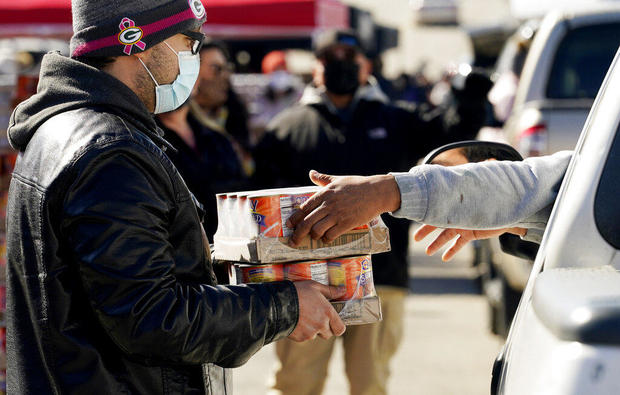