Joe Biden’s national security adviser Jake Sullivan has declared his nation is a resident power in the Indo-Pacific region, telling Australians he rejects claims the United States doesn’t have the staying power to remain in Asia in the face of a rising China.

Mr Sullivan’s declaration that America is “not going anywhere” is in stark contrast to former Australian prime minister Paul Keating, who on Wednesday said while the US should remain in East Asia as a “balancing and conciliating” military power it would be significantly eclipsed by China over the coming years. 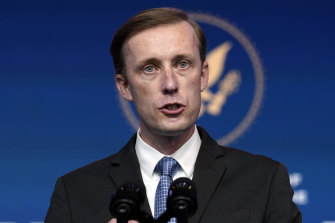 US national security adviser Jake Sullivan says the US has the staying power to remain in the region.Credit:AP

After delivering a wide-ranging address to the Lowy Institute on Thursday, Mr Sullivan also conceded there had been “some challenges” in the rollout of the AUKUS defence pact with Australia and Britain but he stopped short of criticising the Morrison government.

It came on the same day Chinese President Xi Jinping warned the region must not “relapse” into Cold War-style confrontation, which was widely seen as a criticism of groups such as AUKUS and the Quad partnership of Australia, the US, Japan and India.

Mr Sullivan also rejected comparisons to the Cold War, saying the US was instead moving forward with what President Biden calls “stiff competition”.

He said the US was going to “compete vigorously across multiple dimensions” and “stand up for our values”, but it also recognised that China was “going to be a factor in the international system for the foreseeable future – it’s not going anywhere”.

“We are a resident power in the Indo-Pacific. You know, we’re resident as far west as Guam, in terms of actual American territory… We’re resident with substantial long-term troop presence in Japan, in Korea, in Australia.

“And at any given moment, American surface and undersea assets are at work, enforcing freedom of navigation, engaging in exercises, engaging in work on humanitarian assistance and disaster response. And so we have been a resident power in the Indo-Pacific for decades. It is core to our being as a geopolitical actor. It is fundamental to our identity.”

Mr Sullivan said the Biden administration’s strategy was to build “situations of strength” with other countries “to deal both with the hard challenge of the rise of China and the enduring threat that Russia poses” as well as other challenges.

He said the US wants to “set the terms for an effective and healthy competition with China”, while leaving open the door to cooperating with Beijing on areas such as climate change.

Australian Prime Minister Scott Morrison has been forced to deal with the continued fallout of the AUKUS agreement to build nuclear submarines with the help of the US and Britain after it sunk a $90 billion deal with France to build conventionally powered boats.

French President Emmanuel Macron last week accused Mr Morrison of lying to him, while President Biden said that the handling of the decision was “clumsy” and he had been under the impression the French were informed well in advance of the announcement in September.

Asked whether the US president was referring to Australia’s handling of the announcement, Mr Sullivan said “we have had to go through some challenges in dealing with the rollout and in how we’ve tried to engage intensively diplomatically with the French”.

“I mean, this sincerely, I know it comes off as a sincere dodge – but a dodge nonetheless – is that I just think there’s no profit in revisiting how we got to where we are,” he said.

“Going back through all the ins and outs of this will be interesting for the historians to do at some point. But as National Security Adviser, I’ve got to keep sort of my eyes firmly fixed on the present and future.”

He said sharing nuclear technology with Australia was a “big bet” and Mr Biden “wanted to say not just to Australia, but to the world, that if you are a strong friend and ally and partner, and you bet with us, we will bet with you”.

In an appearance at the National Press Club on Wednesday, Mr Keating said Australia had tied itself to the US’s “wishful thinking” that it could be the security guarantor in both the Atlantic and Pacific oceans.

The former Labor prime minister said China was “simply too big and too central to be ostracised” and declared Australia was “at odds with our geography and we have lost our way”.

He also said Taiwan was “not a vital Australian interest” and labelled it a “civil matter” for China.

Japan’s embassy in Canberra also took issue with Mr Keating’s attack on its ruling Liberal Democratic Party, which he claimed were the “the Bourbons of the Indo-Pacific” and should have reached “accommodation with China years ago”.

“This is not the era of the Bourbons. This is an era in which the security situation in the Indo-Pacific is becoming more severe year after year,” Japan’s embassy said.

“That is why the Embassy of Japan has no intention to comment on any outdated description of the challenges facing Australia and Japan.”.