A cross-party delegation of Australian MPs has met with Washington’s top envoy in Canberra in their continued attempts to encourage the United States to drop its extradition attempts against the WikiLeaks founder. 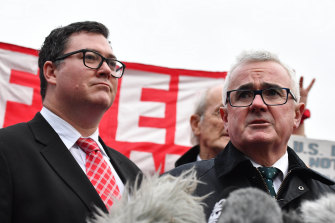 The US Justice Department has appealed a British judge’s ruling that prevents Mr Assange from being extradited from London to face espionage charges.

Judge Vanessa Baraitser ruled last month that while the case against the Australian was sound, his fragile mental health put him at “substantial risk” of committing suicide in prison.

Supporters of Mr Assange had hoped that new US President Joe Biden’s administration would opt to drop the case, which the Obama administration had declined to charge over concerns that doing so would put press freedoms at risk.

He is accused of helping former army private Chelsea Manning obtain and leak classified information on the wars in Afghanistan and Iraq.

Mr Wilkie, a whistleblowing intelligence officer-turned-MP, said the delegation raised numerous issues with Mr Goldman, including the increasing cross-party and public support for the US extradition of Mr Assange from the UK to be dropped.

The trio argued the US was at risk of “reputational damage” over the inconsistency that WikiLeaks source, Chelsea Manning, had her sentence commuted while WikiLeaks founder, Julian Assange, was still being pursued.

Ms Manning, a former US soldier who worked with Mr Assange to acquire confidential diplomatic cables, had her sentence commuted by former president Barack Obama in January 2017.

Mr Wilkie said Mr Goldman gave the delegation a good hearing and promised to convey its concerns to Washington.

“It was heartening that Mr Goldman agreed to the meeting and gave us a fair hearing,” Mr Wilkie said. “Hopefully our representations this morning impressed upon him the broad concern in Australia, and indeed right around the world, at the shocking injustice being meted out to Julian Assange. The US’s pursuit of Mr Assange is obviously not in the public interest and must be dropped.”

The 49-year-old has been in Belmarsh Prison since April 2019 trying to avoid extradition to the US to face 17 espionage charges and one computer hacking charge.

In 2012 he sought asylum at the Ecuadorean embassy to avoid extradition to Sweden on a rape allegation that he denied. An investigation into the 2010 rape allegation has since been dropped by Swedish prosecutors.

Prime Minister Scott Morrison said in January Mr Assange would be allowed to return to Australia if all charges were dropped.

He said consular support had consistently been offered to Mr Assange, but made clear the government were “not parties to those set of proceedings”.

Mr Christensen, who last year met with Mr Assange in Britain, said the point of the meeting was to express the group’s support for Mr Assange, his right to publish without being pursued through courts and to encourage the US to cease its ongoing legal actions.

Mr Hill said Australians didn’t have to like or agree with Mr Assange, but he deserved fair treatment like any other Australian.

“The US should do the decent, humane thing and drop the prosecution, accepting the UK court’s decision that Mr Assange is unwell and should not be extradited,” he said.