Her side of the story. Pieper James is attempting to defend herself after her dramatic arrival on Bachelor in Paradise.

Bachelor’s Pieper and Brendan’s Relationship: Everything We Know

“Just an [sic] gentle reminder that reality tv isn’t real,” the Oregon native, 24, wrote in a message posted to her Instagram Story on Tuesday, September 7. “An edited, produced, and cut down show isn’t going to show you every single thing said and done. An edited and produced show can’t show you conversations that happened before filming between friends.”

The model debuted on BiP during the Monday, September 6, episode and immediately set the beach on fire when she asked Brendan Morais on a date. The commercial roofer, 31, was previously coupled up with Natasha Parker.

In June, Us Weekly confirmed that Pieper and Brendan were dating, but until Monday’s episode, the Bachelorette season 16 alum claimed that nothing was ever serious between the duo. When Pieper arrived, she called Brendan her “boyfriend” and implied that they planned to come on the show together. Cameras also caught them discussing their Instagram follower counts after news broke that they were dating before BiP. 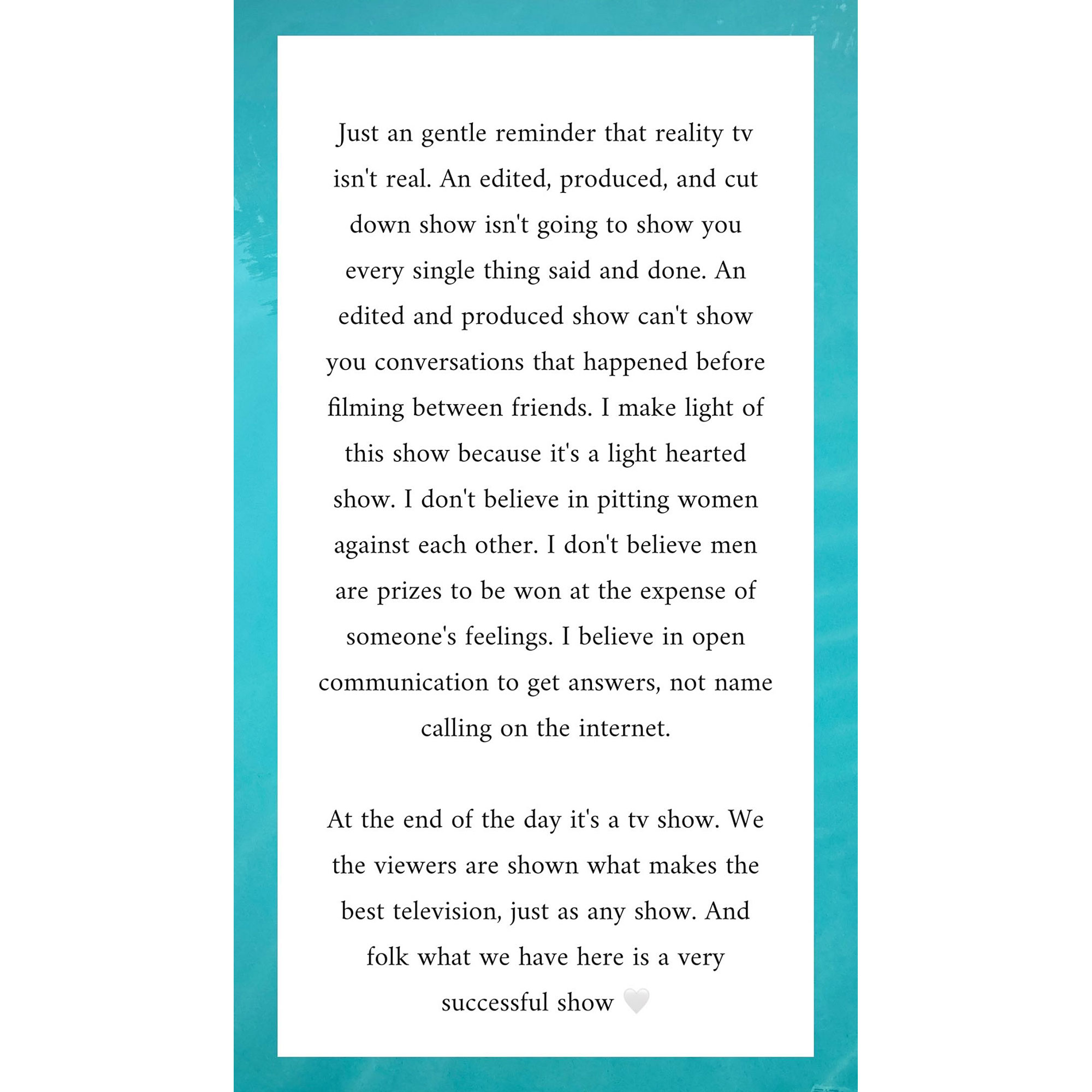 “I make light of this show because it’s a light hearted show,” the Bachelor season 25 veteran continued in her post on Tuesday. “I don’t believe in pitting women against each other. I don’t believe men are prizes to be won at the expense of someone’s feelings. I believe in open communication to get answers, not name calling on the internet.”

She went on to imply that the episode didn’t show the full story, noting that producers choose the footage that keeps viewers invested.

“At the end of the day it’s a tv show,” she wrote. “We the viewers are shown what makes the best television, just as any show. And folks what we have here is a very successful show.”

After the episode aired, both Brendan and Pieper lost thousands of Instagram followers, and several of their BiP costars weighed in on the situation with a mixture of shock and disappointment.

“Brendan got cast for Fboy Island and accidentally showed up to the wrong beach,” Demi Burnett, who went on one date with Brendan earlier in the season, joked via Twitter. “Glad my date with Brendan went horribly now.”

Tammy Ly, meanwhile, noted that the rest of the cast learned about the Instagram followers conversation along with viewers at home. “We are ALL shocked to hear what was said on this episode,” she tweeted on Monday. “We don’t get to listen in on ‘private’ convos until it gets aired back.”

Bachelor in Paradise airs on ABC Tuesdays at 8 p.m. ET.