At the beginning of The End, the exceptional new Australian comic-drama about how we confront the difficult realities of both life and death, Edie Henley (Harriet Walter) does her best to commit suicide. The sequence has a shocking alacrity and a clockwork mirthfulness – you’re jolted upright, but compelled to laugh at Edie’s exasperation when she realises she’s battered but definitely still breathing. It’s a highwire act of tonality: the series is uncompromising, but its blows are illuminating.

A widower and breast cancer survivor, Edie is shipped off to the Gold Coast and a place in a retirement village that’s a gilded hospice secured by her daughter, Kate Brennan (Frances O’Connor), a doctor who specialises in palliative care. Kate is “ethically bound” to keep her patients alive, even when they want to die, while the indignant Edie is insistent that she’s preparing for another go at suicide. This stand-off soon comes with euthanasia drugs, and startling examples of how some in their difficult final days see death as a release. 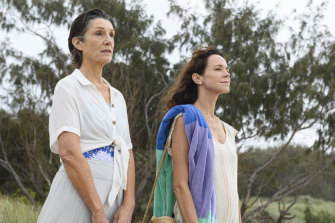 “It’s that thing where if you contemplate your death it actually gives your life more meaning,” O’Connor says. “You’ve got these two pieces right next to each other – people trying to live life but being majorly dysfunctional, and the question of how should people die. The juxtaposition of those two elements makes it profound as a show.”

The Australian actor was speaking from her home in London, a city buffeted by the European winter and COVID-19 – “it’s pretty full on, but you just have to keep going,” she noted – but her thoughts easily returned to the Gold Coast shoot of The End and how incisive the scripts by Australian creator Samantha Strauss were for the Foxtel/Sky Atlantic co-production. Nothing O’Connor has read since then has compared favourably.

“Samantha Strauss is such an amazing writer and on any show if the writing is really good everything else takes care of itself because everyone wants to do justice to the words and the images,” O’Connor says. “We all felt while working on it that we had something special. We wanted to give it some weight and across the board we felt that.”

“It’s a subject that inflames a lot of people, and those are the subjects we need to look at.”

Strauss was previously known for co-creating the young adult franchise Dance Academy. With The End as her calling card, she’s now writing and producing for the American streaming service Hulu. The 10-part series feels as if it comfortably contains multiple shows: the long-held struggle between Kate and Edie, Kate’s ethical dilemmas and her relationship with a patient’s husband, Edie’s second shot at life alongside septuagenarians played by the likes of Noni Hazelhurst and Robyn Nevin, and Kate’s oldest son, Oberon (Morgan Davies), whose gender transition has been fraught with difficulties.

“There are images or a turn of phrase in Sam’s writing that is so evocative. It makes you think of something that translates into your performance,” O’Connor says. “We got to read the first eight [episodes], so we had the arc of our characters laid out, which is unusual, plus Sam was there the whole time to talk to us.”

The End refuses to look away, navigating storylines such as Kate’s patient, Beth (Brooke Satchwell), who has motor neurone disease and is determined to die before her suffering is unbearable, with an everyday frankness. “I never realised how much you grieve your own death,” a member of a support group for the terminally ill notes in the third episode, but the show’s life and death realism is leavened by a particularly sharp strand of humour.

“What’s interesting about a lot of black comedies is that they somewhat divorce themselves from the harsh reality of the situation they’re about,” O’Connor says. “But Sam goes there, she embraces the darkest of moments and that separates us from the usual black comedy.“ 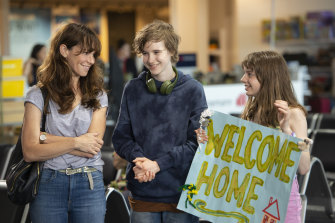 For Strauss, The End began as a script she wrote when just 19 years old and her 80-year-old grandmother – like Edie – relocated to a Gold Coast retirement village after a suicide attempt (she prospered there). Years later the produced version explores the division over the right to stop living and depicts euthanasia. Voluntary assisted dying is lawful in Victoria under limited circumstances, but it is still a contentious policy proposal in states such as NSW and Queensland. Like Kate, O’Connor found herself buffeted by the debate.

“Kate realises that there are areas of grey when it comes to how people suffer at the end of their lives, especially when we have the means and the intelligence to make more sophisticated decisions. Instinctively she knows the right thing to do, but it’s a very shaky journey there,” O’Connor says. “I still feel conflicted about it. It’s a subject that inflames a lot of people, and those are the subjects we need to look at.”

“It definitely made me think about things and that’s what’s great about the show – we literally don’t like to think about the end, do we?” she adds. “When I was doing research I got to follow two palliative care doctors around London for three days to see what they did. It was such an education and they had so much grace to the way they worked.”

Walter, a mainstay of the Royal Shakespeare Company in the 1980s and 1990s and more recently an illustrious accelerant to the likes of Patrick Melrose, Succession, and Killing Eve, gives a shoot-the-lights-out performance that is angry, unmoored, and yet deeply vulnerable. “She has so much experience and she makes it all look so effortless,” O’Connor says of her co-star and the way she approached their exploration of the mother-daughter dynamic.

For a mainstream series The End is also ground-breaking in the way it looks at the indignities of ageing, the reality of women’s bodies as they grow older, and how earlier generations of women were deprived of knowledge about sexual pleasure. At the same time the depiction of family is bracing – the harshest of words are exchanged without warning, contained within bonds that bend but can never quite break.

“That’s much more how it is. In any family you can have the ugly next to the beautiful,” O’Connor says. “Kate’s really trying, and that’s how so many mums feel – ‘I’m doing the best that I can’. We beat ourselves up so much, but what’s great here is how the relationships here are so real and so flawed. That’s the norm when people are evolving. You’re trying to be the best you can, but it often doesn’t go so well.”

WHAT The End
WHEN 8.30pm Tuesday, Fox Showcase and Foxtel On Demand