Aisle say! ‘Controlling’ bride slammed for demanding her sister cover up her new tattoo out of fear she’ll ‘ruin’ $3,000 professional photos (and she’s even threatening to kick her out of the wedding party)

A ‘controlling’ bride has been slammed for demanding her sister cover up her tattoo out of fear she’ll ‘ruin’ her $3,000 professional wedding photos.

Earlier this month, the anonymous US bride posted on a Facebook group to complain about her sibling’s new inking.

Sharing a screenshot of the Snapchat she’d been sent, the woman wrote: ‘My sister just got a tattoo of big a** cherries on her arm and is refusing to wear a dress with sleeves now.’

The inking – which is on her bridesmaid’s forearm – features an outline of two interlocking heart-shaped cherries and some stars.

The bride continued: ‘How do I politely say either she wears a dress with sleeves, uses make-up to cover it up or I’ll have to find someone else to take her place in the bridal party because I don’t want these in the pictures I’m paying over $3k for.’ 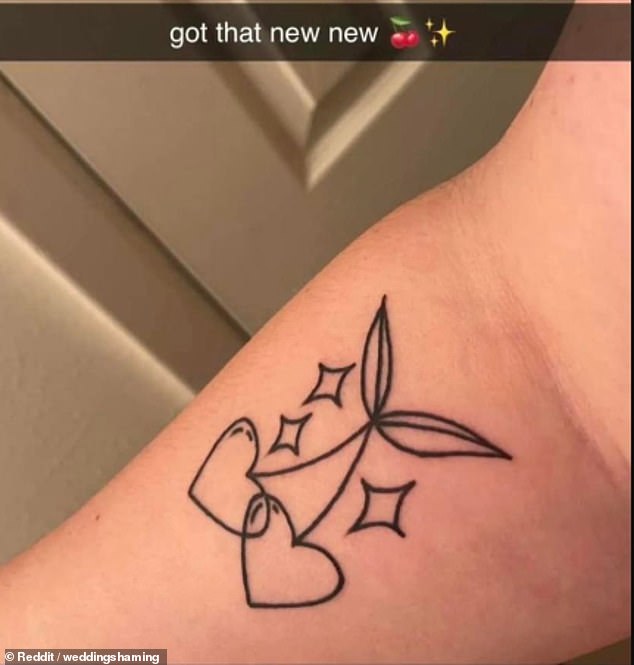 The bride’s sister sent her a photo of her new inking. The black outline was of two interlocking heart-shaped cherries and some stars.

The bride turned to Facebook for advice after her mother suggested her other daughter could cover up the inking with her flowers. The anonymous wife-to-be threatened to replace her sister in her bridal party

Trying to offer some kind of resolution, the bride’s mother suggested that her other daughter ‘strategically hold her bouquet over’ the inking.

Unimpressed with that idea, the woman continued: ‘What is she going to do? Cradle it like a baby?’

However, it didn’t take long for a member of the Facebook group the bride posted in to then share it on Reddit’s Wedding Shaming forum.

Inviting other people to comment on the situation, the user titled the post: ‘Bride is upset her sister’s life isn’t revolving around her wedding.’

The woman’s post sparked fierce debate in the Reddit forum. Users blasted the bride’s ‘controlling’ behaviour and pointed out simple it would be to edit out any glimpse of the inking

One replied: ‘That is the easiest thing to cover up in PhotoShop. Less than 10 seconds. People just love fussing over nothing.’

‘I was expecting to see some huge six inch tall glaring red cherry tattoo,’ another added. ‘Plus it looks like it’s more on the inside of her arm. Probably won’t even be able to see it in pics that much.’

‘The chances of even seeing it in the photos are minuscule,’ a third wrote. ‘The smallest, most minimal, most innocent little cherries. The bride needs to get a grip.’

‘Wanting control over every little aspect,’ a fourth fumed.

‘I can’t imagine being the type of person who would replace my sister in my wedding party over a tattoo,’ a fifth said. ‘Your wedding party is supposed to reflect the people closest to you, not who you think looks best in a photo. So gross.’