Bride is flooded with messages after sharing a wedding dress picture

A bride-to-be who shared a picture of herself wearing a wedding dress because her fiancé isn’t on Twitter has been inundated with sleazy messages from strangers.

Kay, a mother-of-three from Chandler, Arizona, was all smiles as she posed for the photograph in her stunning white gown with a plunging neckline at a bridal store.

And while it’s bad luck for the groom to see the bride in her wedding dress before the ceremony, the 25-year-old proudly shared the picture of herself on social media, which has since gone viral after it was ‘liked’ more than 700,000 times.

‘My man doesn’t have Twitter so everyone look at my wedding dress,’ she wrote. 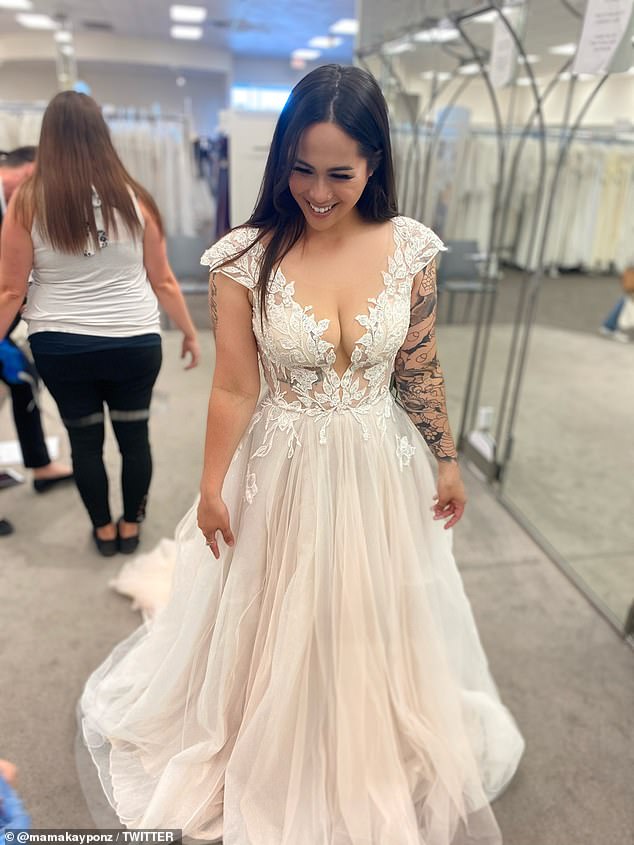 Bride-to-be Kay, from Chandler, Arizona, was all smiles as she posed for the photograph in her stunning white gown with a plunging neckline

‘They tried to send him a picture [of my wedding dress]. My fiancé blocked him and didn’t open the message, thank god,’ Kay said.

But she later joked: ‘I didn’t know it was going to go viral. Worst case scenario, he sees it and it’s not a surprise. I still get to marry him. That’s what matters.’

After sharing her photograph, the mother said she was flooded with flirty messages.

‘Men really saw a viral tweet of me in a wedding dress and thought that was the perfect opportunity to slide into my DMs. They really have the audacity,’ she wrote.

In another tweet, she shared a screenshot of her inbox showing multiple messages from strangers, including: ‘Wassup beautiful’, ‘your beauty caught my attention’ and ‘Hey baby I’m in need of a loyal and trustworthy sugar baby.’

But the messages didn’t end there. Dozens of strangers responded to her post, with one asking: ‘Wow. Are you single?’

However, many quickly defended the bride-to-be, with one saying: ‘This is ridiculous, trying to flirt with a woman in a wedding dress. Makes you ashamed to be a man.’

Meanwhile, many complimented the bride-to-be on her wedding gown, with many describing it as ‘gorgeous’, ‘beautiful’ and ‘stunning’.