Greens leader Adam Bandt is warning Labor that his party could withdraw crucial support for the government’s scheme to deliver on Australia’s new climate targets, as Climate Change and Energy Minister Chris Bowen’s promises to work with fossil fuel exporters to reduce the economic impact of pollution caps.

Bandt is making his demands just as the debate heats up between big investors, who want coal and gas companies starved of government funding for climate action, and fossil fuel companies that are lobbying for taxpayer-funded support for switching to cleaner technologies. 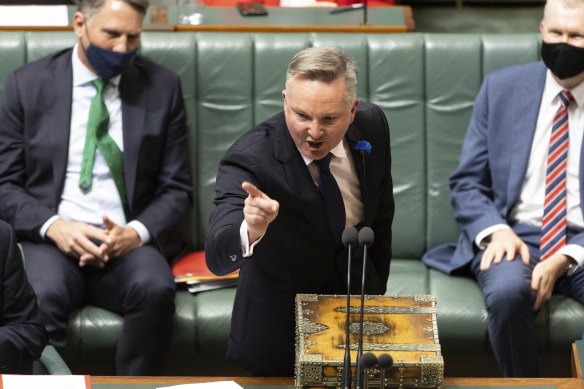 The safeguard mechanism is a scheme that sets pollution caps on the country’s 215 largest industrial and resources emitters. The Albanese government has committed to tighten these caps to deliver a large chunk of the emissions cuts it needs to reduce emissions by 43 per cent by 2030.

New legislation will need to pass the Senate to allow companies that reduce their pollution to trade the carbon credits they earn with other big polluters. The Greens could potentially hold the balance of power needed to approve this change.

Bowen has promised that exporters “won’t be impacted by a greater constraint than their competitors overseas” who are not all bound by the same pollution limits. He told the Australian Financial Review on Monday the safeguard Mechanism was “not designed as a mechanism to stop any new oil and gas” and he would be “very sensitive to the needs of emissions intensive, trade-exposed industry”.

Coal and gas companies generate half the emissions captured by the safeguard mechanism and Bandt said he would not accept a scheme that enables new fossil fuel projects to open up, or offers carve-outs for existing projects.

“If the government is now looking to deal with the Liberals and create a safeguard scheme that opens up new coal and gas, it will blow their climate targets,” he said.

The government’s policy paper for the scheme raised several options to assist exporters, including direct cash grants to install cleaner technology and awarding free carbon credits to gas plants and coal mines so they can offset their emissions without cost.

Gas giant Woodside, the first major fossil fuel company to publish its submission to the policy paper, said exporters do not need exemptions from pollution caps but called instead for “direct fiscal assistance” to help them switch to lower emissions systems.

But the Investor Group on Climate Change (IGCC), which represents investors with more than $30 trillion in global funds under management, said in its submission that assistance should be blocked to coal and gas companies that will “inevitably decline” and instead be targeted at growth industries such as renewable energy, critical minerals, green steel, hydrogen and aluminium.

“If Australia doesn’t get the policy settings right, then we will continue to see capital flight from Australia to other economies,” said IGCC policy director Erwin Jackson.

The peak lobby groups for Australia’s mining and gas industries have not yet released their submissions on the new emissions targets and the scheme but said they would push Bowen to deliver “tailored treatment” for exporters that face tighter pollution caps.

Minerals Council chief executive Tanya Constable told The Sydney Morning Herald and The Age a significant number of her members’ facilities are trade exposed and “any changes to the pollution caps must allow for tailored treatment of facilities”.

The Australian Chamber of Commerce and Industry released its submission on Wednesday, arguing that the government should give exporters financial assistance, but not grant them higher emissions caps because that would unfairly increase the burden on other companies.