The government’s decision to postpone the re-introduction of facial beauty treatments has been branded ‘sexist’ after pictures emerged of barbers waxing their male client’s facial hair.

While plans to allow facial treatments have been postponed, images shared on Twitter revealed that dozens of barbers have been applying wax, without wearing the proper PPE, to the beard, lip and eyebrow area of their clients.

In a desperate plea to the Prime Minister, beauty influencer Caroline Hirons, 50, from London, collated a series of social media posts from the past week.

Twitter users reacted with anger over the snaps and branded it ‘sexist’ that close contact beauticians such as administering fillers, threading eyebrows or facial waxing, have remained banned. 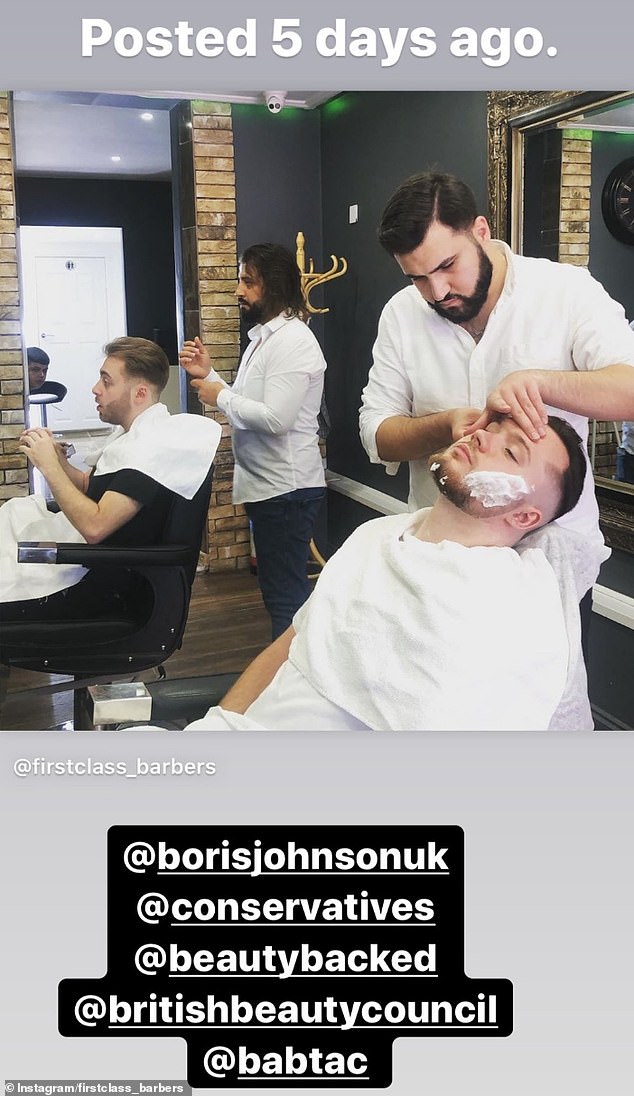 Images shared on Twitter revealed that dozens of barbers have been applying wax, without wearing the proper PPE, to the beard, lip and eyebrow area of several men. Pictured, First Class Barbers in Kent 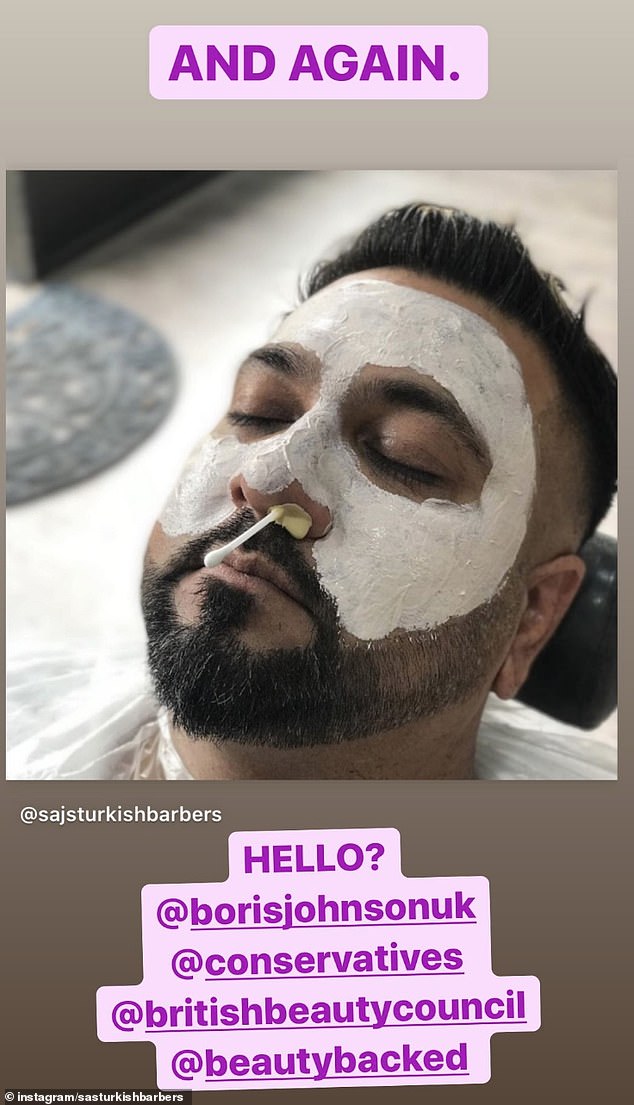 One now removed post, from London Barbers Club, which Caroline claims was posted on Sunday, showed a man with wax on his nose, cheeks, ears and eyebrows.

Meanwhile another re-posted image from Findik’s Turkish Barbers, in Bournemouth, revealed a barber posing for a selfie with his mask around his neck, after just having administered wax to a clients nose.

Furious Twitter quickly commented on the posts, with many addressing their local MP asking them to ‘speak up’ for small businesses and self employed therapists, while insisting they were ‘confused at how this is allowed’.

Current government guidelines bans close  contact beauticians such as administering fillers, threading eyebrows or facial waxing (pictured left, a man having his nose hair waxed, and right, a man with wax on his nose, cheeks, ears and eyebrows) 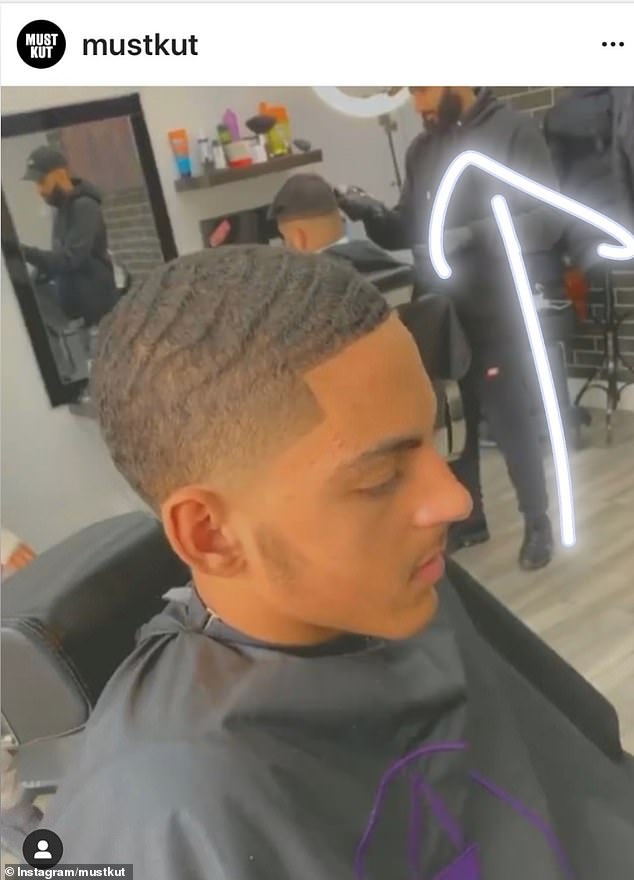 Facial treatments were originally set to be allowed on August 1st, but the announcement has been postponed for an additional two weeks with some now branding the decision ‘sexist’ (pictured, London based barbers Must Kut)

‘Please can you speak up about this’, wrote one. ‘Many small businesses and self employed therapists in our area will be struggling for their livelihoods.

‘Meanwhile your colleagues were jeering and laughing about beauty services. All the while men are having face masks and waxes.’

Another person questioned: ”How is this okay?

‘So if close contact beauticians rebrand as barbers, they can reopen their businesses? What message does this send?’ 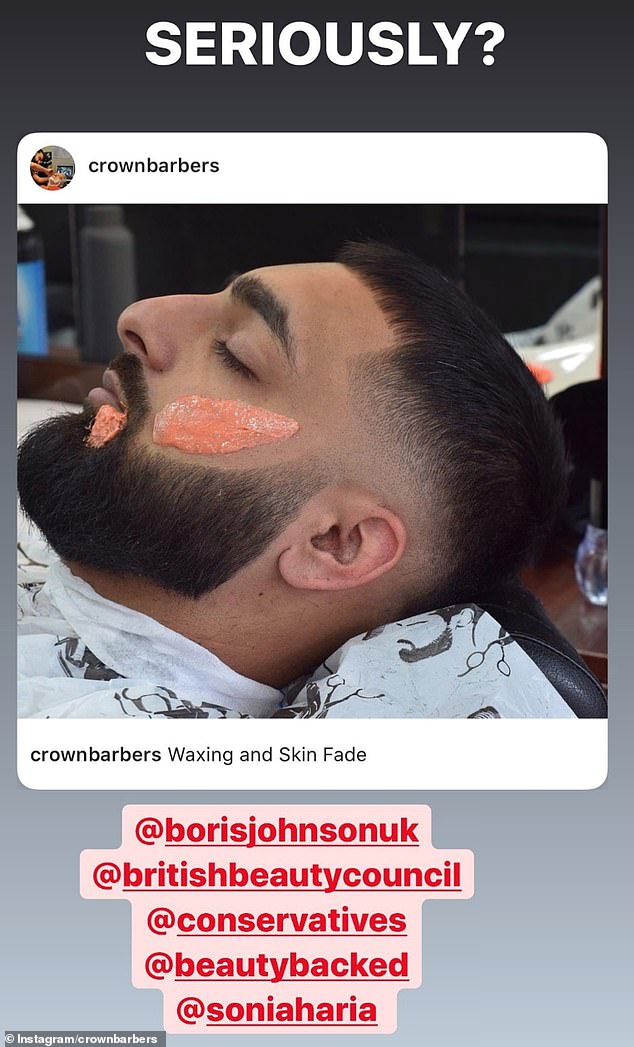 ‘So confused, how this is allowed?’ wrote a third. ‘I can’t get my facial done but some of those men can?

‘So basically not having a penis to do the procedures and receive them once again is the problem. But there is no sexism in this country!’

Meanwhile, others expressed outrage that several of the images showed barbers not properly wearing their masks, or wearing no face covering at all.

The current government guidance says those providing a service at workplaces such as hairdressers and barbers or beauty salons should wear a clear visor that covers the face and provides a barrier between themselves and the client from respiratory droplets caused by sneezing, coughing or speaking. 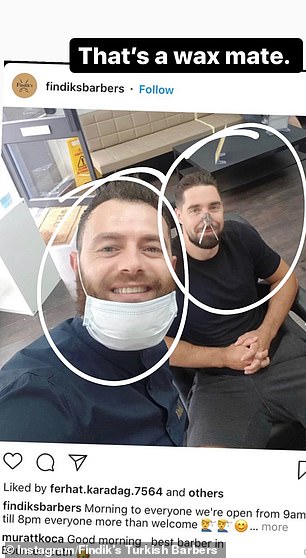 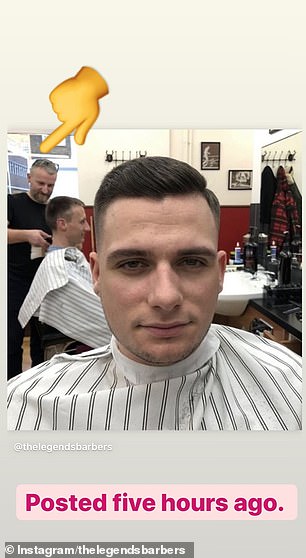 Several of the images showed barbers not properly wearing their masks, or wearing no face covering at all (pictured left and right, barbers wearing improper PPE)

The visor should be worn properly and should cover the forehead, extend below the chin, and wrap around the side of the face.

‘I think it’s the lack of PPE that is the most shocking thing in these photos’, wrote one Twitter user.

Another added: ‘Please can you explain why,as a fully qualified beauty therapist trained in infection control & wearing full PPE (mask / visor / gloves / apron) I am not able to perform facial treatments in my clinic. Thank you.’

Tory MP Caroline Nokes, Chair of the Women and Equalities Committee, previously said it was ‘not a level playing field’ between the two types of grooming.

‘Even if it looks like I could get my eyebrows done at a barbers this weekend, I’ll wait until it’s deemed OK to go to a salon.’

Last month, Boris extended the compulsory wearing of face masks to most indoor public spaces, including museums in places of worship.

Furious Twitter quickly commented on the posts, with some branding it ‘sexist’ that barbers could perform the treatments on clients

This was part of the Prime Minister’s announcement on July 31, when he said he was ‘squeezing the brake pedal’ on lifting coronavirus restrictions further.

He said the scheduled August 1 return of casinos, bowling alleys and close contact services like beauticians has been pushed back to August 15 ‘at the earliest’.

Loosening rules to allow wedding receptions of up to 30 people and a pilot scheme of bringing crowds back to sports venues were also delayed.

After the infection rate doubled in July, ministers and scientists are increasingly weary of a second onslaught of the virus, which is seeing a resurgence in several other countries.

Further lockdown restrictions have also been imposed across the North West, as people have been banned from gathering in other people’s homes or gardens due to coronavirus fears.