Princess Eugenie is the latest celebrity parent to ditch the term ‘step-child’ in favour of the ‘warmer’ phrase ‘bonus child’ in a bid to make their partner’s children feel ‘included’, a parenting expert has claimed.

The Queen’s granddaughter, 33, whose first child is due later this year, described her role as a stepmother to Edo’s son Wolfie, five, calling him her ‘bonus son’ during an interview with author Giovanna Fletcher for Hello!’s Back to School digital issue.

She follows in the footsteps of supermodel Gisele Bundchen, who refers to her husband Tom Brady’s son Jack, 13, as her ‘bonus child,’ and Gwyneth Paltrow, who declared she prefers the name Bonus Mum.

Meanwhile, Fearne Cotton has previously taken to social media to call for an end to the ‘evil stepmother’ stereotypes in children’s books.

Speaking exclusively to FEMAIL, parenting expert Georgina Durrant, who is author of 100 Ways Your Child Can Learn Through Play, believes the coined term helps the child ‘feel valued and accepted in their family.’

Discussing what she believes to be the reasoning behind the growing trend in celebrity parent circles, she added:  ‘I think it would be incredibly warming for a child to know they are referred to as a bonus to the family.’ 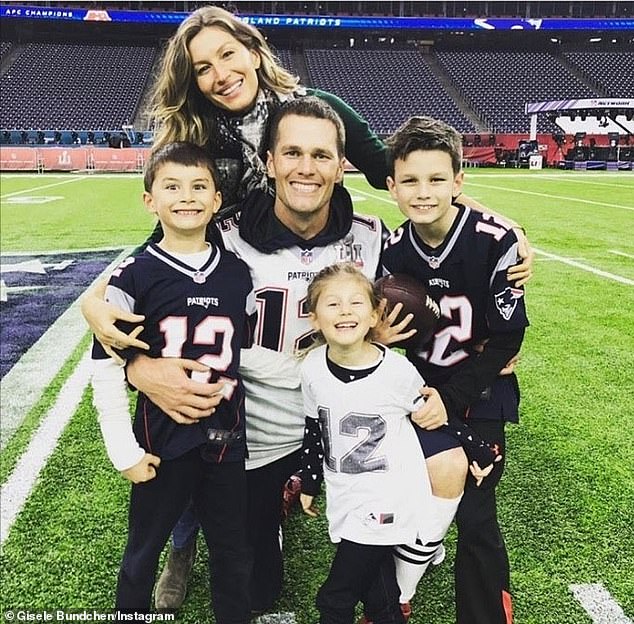 In 2018, Bundchen spoke to People and expressed that her early days of motherhood proved to be quite challenging 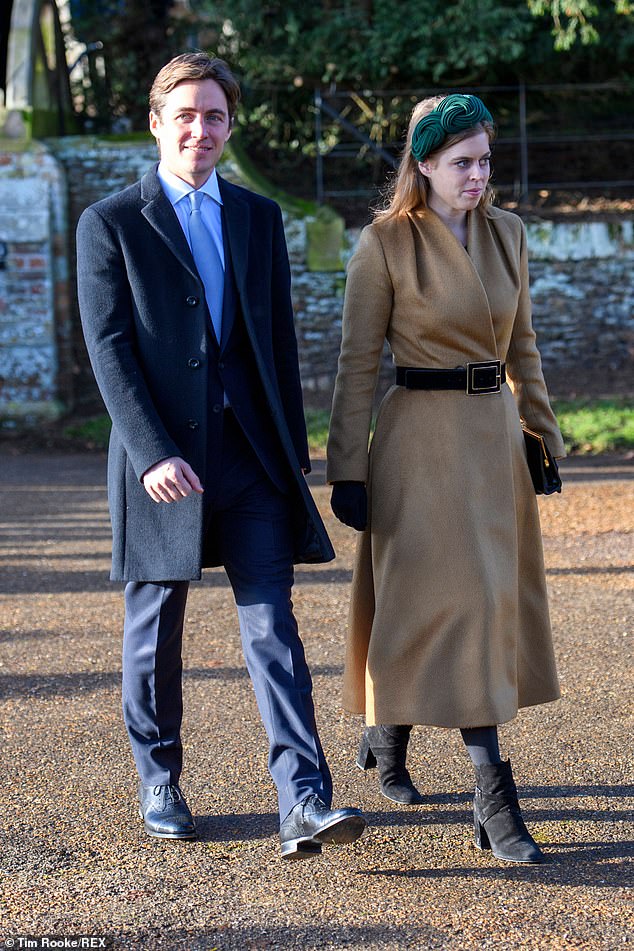 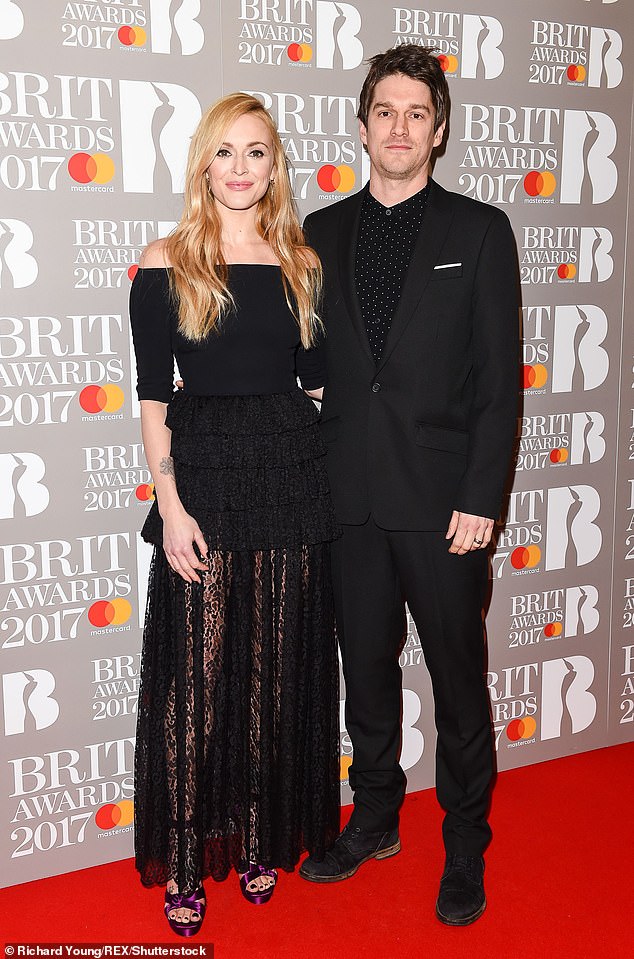 Pictured, Fearne Cotton and Jesse Wood at The Brit Awards, O2 Arena in London on 22 February 2017

She continued: ‘I know step parents in children’s stories such as Cinderella have previously cast a bit of a shadow over the term “step mum,” but I think we’ve moved on a lot since then and many people would say there’s nothing wrong with the traditional titles too.’

She goes on to note that in her opinion, there’s no right or wrong – as long as you choose a title that ‘everyone is happy and comfortable with.’

‘My advice to families would be, if the children are old enough, to involve them in the decision making process when choosing the term they’d like to be referred to,’ she said. ‘And also leave it open to change in the future if they change their mind.’

In 2018, Gisele Bundchen revealed that she refers to her husband Tom Brady’s son Jack as her ‘bonus child,’ adding that his birth inspired them to have children of their own sooner than they necessary would have, so that ‘the siblings would be close in age.’

Tom Brady, 44, was previously involved with actress Bridget Moynahan from 2004 until they eventually split in 2006.

However, the actress confirmed that she was pregnant with the football star’s child in February of 2007 – just two months after he had started dating Gisele – and she later gave birth to a son named Jack, currently aged 13. 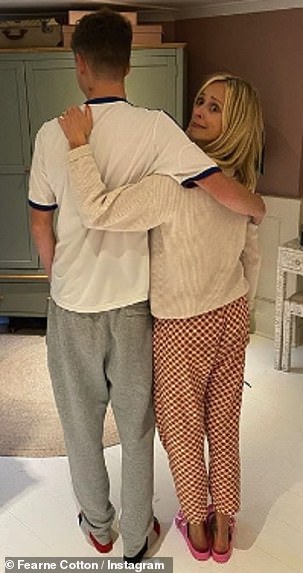 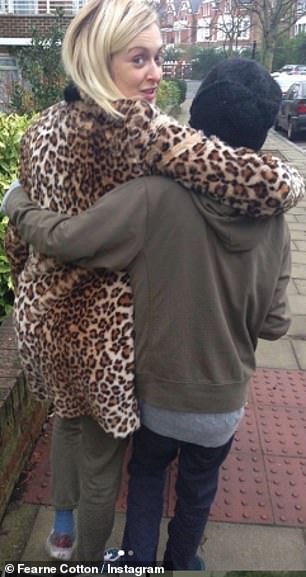 Growth spurt: Fearne Cotton and her husband Jesse Wood celebrated a milestone on Saturday as his son Arthur headed off to university, with the star sharing this hilarious comparison snap

Though initially rattled by the drama, the Brazilian beauty revealed how Brady and Bridget’s son was a blessing in disguise, crediting the little one with helping her ‘heart expand in ways I didn’t know was possible.’

The couple have an 11-year-old son named Benjamin and a eight-year-old daughter called Vivian.

Elsewhere, Gwyneth Paltrow, who had already rebranded divorce as ‘consciously uncoupling’, also helped to introduce the term ‘bonus mother’ on her website Goop, suggesting it is more ‘useful’.

Family therapist Ashley Graber wrote on the star’s lifestyle website Goop: ‘I like to use the term “bonus” instead of “step”. I find that it’s much more useful, and helps us better frame everything that comes with it.

‘Bonus parents have anxiety about not knowing their position. It can feel very uncontained when you don’t know your role.’

Kirstie Allsopp has also previously given her approval to the term ‘bonus mother’, telling the Mail that the ‘lovely’ phrase avoids the stigma of Cinderella’s ‘wicked stepmother’.

The TV presenter, who has two children by birth – Bay Atlas, born in 2006, and Oscar Hercules, born in 2008 – as well as ‘bonus children’ Hal and Orion with partner Ben Andersen, has spoken of her struggle with a so-called ‘blended’ family.

She said Goop’s phrase conveys the ‘extraordinary privilege’ of caring for another woman’s child, adding: ‘It’s hard being a step-parent, but seriously worth it. I love “bonus parent” because that’s what it is – adding to raising the child, but being mindful about not overstepping their parents or treading on toes.’ 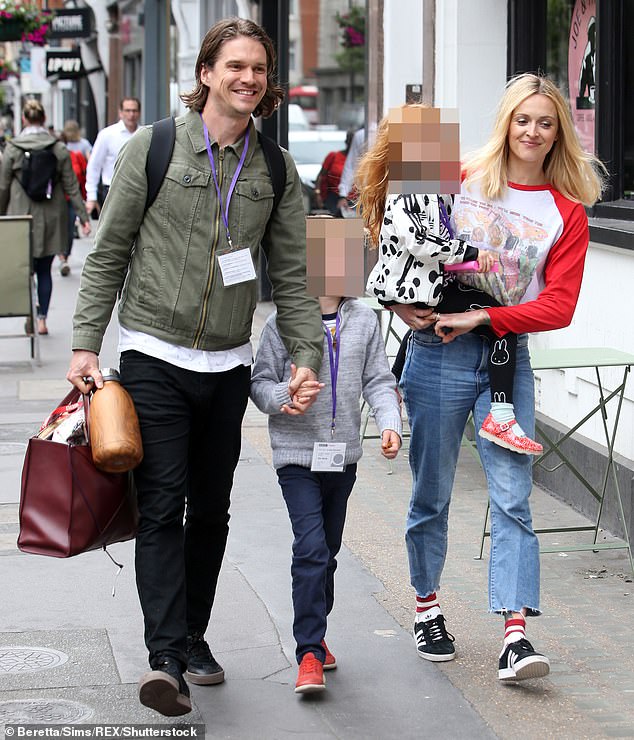 Fearne Cotton has called for an end to the ‘evil stepmother’ stereotypes in children’s books. Pictured, with husband Jesse Wood and their children Rex and Honey in London last year

The TV presenter, 38, who enjoys a close relationship with her own stepchildren, insisted it is time for better representation of stepparents in children’s fiction, saying her own experience of being a stepmother had been ‘purely positive’. Pictured, the tweets making her case

Elaine Soller, Head of Customer Experience, at Babysense shared their thoughts on the rise of phrases such as ‘bonus son’, instead of the more traditional ‘step son.’

‘For some people, the phrase “step” isn’t as loving when talking about their partner’s children or relatives and using phrases such as “bonus son”, can make the child feel more loved and accepted by their new step parent.’

She went on to highlight how more traditional ways of parenting and everyday life aren’t as favoured as what they once were.

‘This means that people now like to create their own unique way of life and put their own stamp on a new family,’ she added. ‘Sadly, divorces are more common in today’s world as well, and many parents struggle to create a bond between their new partner and child, so using a phrase such as “bonus son” can help the child feel like part of a new family and not a burden.’

Elsewhere, presenter Fearne Cotton, 39, who enjoys a close relationship with her own stepchildren, insisted it is time for better representation of stepparents in children’s fiction, saying her own experience of being a stepmother had been ‘purely positive’.

‘Blended families are common place but the representation of step parents (especially mums, it never seems to be the step father) in kids fiction needs to change to suit the times,’ she tweeted in February last year.

Fearne is married to musician Jesse Wood, 44, and stepmother to his children Arthur, 19, and Lola, 15, whom he shares with first wife Tilly. Fearne and Jesse, son of the Rolling Stones’ Ronnie Wood, have two children together: Rex, seven, and Honey, five.

However, according to parenting expert Fiona Small, founder of Young Mums Support Network, the term ‘bonus child’ is an American term that has made it’s way over to the UK, and can prove quite confusing.

‘A bonus is something additional, and when you are creating a family setting, you become one unit, so I find the term unsettling,’ she explained. ‘Additionally, I think that it should be discussed with the child if they are of a certain age what they would like to be referred to as.’

She went on to explain how ‘step child’ too has it’s own connotations – despite being more widely used.

‘It suggests that the child is somewhat not a part of the family,’ she said. ‘Blending families is never easy, so using softer terms is essential so that everyone feels loved and supported, so I don’t think bonus child is necessarily warmer than step child.’