Washington: Treasurer Jim Chalmers will raise concerns with the US Federal Reserve about the impact that “blunt and brutal” tightening of monetary policy could have on Australia’s economy, as he prepares to hand down his first budget against the backdrop of a looming recession in parts of the world.

Arriving in Washington for the autumn meeting of central bankers and global finance ministers, Chalmers said that although Australia was in a strong position to withstand a global recession, it would not be immune from “a substantial deterioration” in economic conditions. 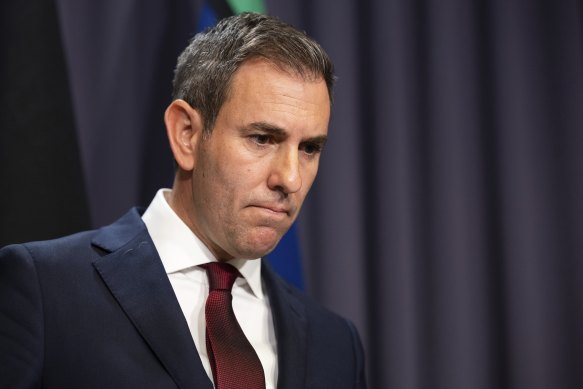 Treasurer Jim Chalmers will raise concerns about the global ecoomy at a meeting of the International Monetary Fund this week.Credit:Alex Ellinghausen

“The reason I’m spending a couple of days with my international counterparts so close to the handing down of the budget is because the global situation is deteriorating so quickly that we need to update our budget in real time,” Chalmers said.

“If further tweaks are necessary when it comes to re-profiling some of our spending or other sorts of shifts in the budget, we’re prepared to make those changes.”

The Treasurer’s Washington trip comes as the world enters a difficult phase, with the International Monetary Fund warning this week the impact of Russia’s invasion of Ukraine, the slowdown in China and the cost-of-living crisis caused by broadening inflation pressures had placed the global economy on the brink of a recession.

Asked by if he was concerned the US Federal Reserve was tightening monetary policy too quickly – something that many experts fear could accelerate the risk of a recession – Chalmers said this would be raised when he meets with Federal Reserve chair Jerome Powell, central bank governors and other G20 finance ministers in coming days.

“What we’re seeing right now is the sharpest synchronised tightening of monetary policy in the modern era, and that’s having obvious consequences for economies right around the world – and what happens here in the US when it comes to interest rates has consequences for us as well,” Chalmers said.

“The risk here is a hard landing brought about by the blunt and brutal application of tighter monetary policy, and that is a central part of the conversation that I’ll be having with my colleagues from around the world.”

Chalmers landed in Washington on Wednesday (US time) and later attended the ministerial meeting of the Coalition of Finance Ministers for Climate Action, becoming the first Australian treasurer in history to do so.

At the meeting, US Treasury Secretary Janet Yellen underscored the importance of redoubling climate ambition to avoid ongoing energy price shocks and encouraged members to find ways to further address the climate crisis.

Chalmers said he flagged Australia’s concerns with soaring gas prices, which he said was “smashing our local industries and particularly our manufacturers”.

While in Washington, Chalmers will also meet with counterparts from Canada, Korea, the UK and India, along with the chief executives of BNP Paribas and JP Morgan.

He again ruled out any changes to the stage three tax cuts in the Octobe5 25 budget.

“The stage three tax cuts are around three budgets away, and they’re currently legislated, so we’ve got more pressing priorities,” he said.

“The best thing we can do right now when it comes to rising interest rates and high and rising inflation is to make sure that what we propose in the budget isn’t counterproductive.”